Finally, a slightly longer look at the Doctor Who Christmas Special: Last Christmas.  Granted, it’s not much longer than the teaser trailers, but there are a lot of new shots in this sneak peek.  As I’ve said before, I’m happy with anything I can get. 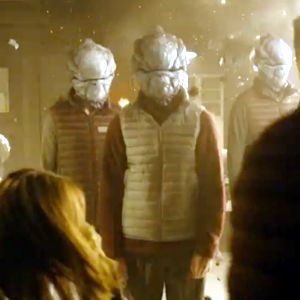 We’re given a much better look at the monsters of the episode.  I’ve been saying they look like cousins to the Silurians, but now I’m pretty sure I was way off-base.  At the 2-3 second mark you can clearly see these creatures have human bodies, the hands give that away, but their heads look more like mutated walnuts than anything else.  My guess is they’re all members of the Arctic research station where the episode seems to take place.

I’m going to call them Walnutheads.  They’ve probably got a much better name than that, but until I know what it is, Walnutheads  is what I’m going with.  Or Bob.  I like the name Bob.  It doesn’t sound so menacing when you tell someone you’re getting attacked by Bob, though.  Walnutheads it is, then.

But no worries!  Santa comes to the rescue with an army of Slinkies, robots, and … a tangerine?  Hey, it may be unconventional, but it got everyone’s attention. It doesn’t hurt that he’s come riding in on the most famous reindeer of them all.  Man, that nose really is bright.

Also, if you haven’t noticed, the elf to the right of Santa (the one armed with the balloon animal) is played by Dan Starkey, better known to Whovians as Strax.  He’s given a chance to shine without all the potato makeup and overly-eager penchant for weaponry.  Well, he is armed with a balloon animal.

The Doctor Who Christmas Special will air on Christmas day on BBC America at 9/8c.