Doctor Who: Last Christmas – A Few Thoughts, A Lot of Quotes

What a relief it is to find out that there was nothing foreboding about the title of this year’s Doctor Who Christmas Special.  A name like Last Christmas conjures up images of ultimate finality, which usually means something very sad.  Thankfully, we learn that every Christmas is “last Christmas” in a way, though had Jenna Coleman departed the show it would’ve taken that title in a darker direction.

We’ve dodged that tangerine … for now.

There were a few interesting/fun faces gracing the screen for this year’s yuletide outing.  First, and most obvious, was Nick Frost as Santa Claus – a man whose parents are obviously Time Lords.  Knowing what the future would bring for their son, they chose to give him a most appropriate name for the part.  With the beard, he was almost unrecognizable, but the voice and mannerisms shone through and he made a fine and feisty “Sweet Papa Crimbo.”

Some less recognizable faces, but ones that have significant ties to the Whoniverse are Michael Troughton (Professor Bellows) and Dan Starkey (Ian the elf).  Michael Troughton is the son of Patrick Troughton, the man who played the 2nd incarnation of the Doctor.  Patrick Troughton is the man I credit with cementing the sometimes whimsical, sometimes gruff and alien, but always quirky personality that’s been a hallmark of the Doctor ever since.  Dan Starkey is a man better known to fans as our favorite lactating Sontaran, Strax.  When you look at him without his potato head, about the only recognizable feature left is his gap-toothed smile, but he’s just as entertaining as the wise-cracking elf, Ian.

It was heart wrenching to see the Doctor admit he lied about finding Gallifrey so Clara would stay with Danny, while at the same time Clara lied to the Doctor about Danny’s death so he’d stop worrying about her and go home to Gallifrey.  Their relationship has been a bit more contentious than past Doctor/companion combinations (Though Donna and Ten gave them a run for their money!), but they love each other at least as much as any pairing the show has ever had.

The premise of dreams within dreams within dreams is nothing new, but the execution of the concept in Last Christmas was good.  Better than most.  And while being attacked by the Kantrofarri (Dream Crabs), Clara shows off some seriously badass math skills.  With a brain that quick and sharp, it’s no surprise she’s been able to pull off pretending to be the Doctor with such success. 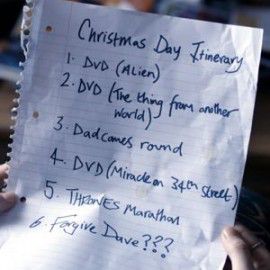 We laughed at Shona’s Christmas to-do list.  The three movies listed, Alien (Facehuggers), The Thing from Another World (Arctic base under attack by aliens), and Miracle on 34th Street (A man claiming to be the real Santa Claus), were all drawn upon for this episode.  I’m guessing that #3 on her list, “Dad comes round”, is possibly a reference to the Doctor showing up to save the day.  The last two items on her list are ones I can’t manage to divine a connection with the episode.  If anyone knows of a connection that “Thrones marathon” and “Forgive Dave” might have to this episode, please let me know in the comments.  Those two are killing me!

Now, on to what you’re really here for – the quotes!

Santa: How did you recognize me?
Wolf: You know how you grew that beard as a bit of a disguise? People have picked up on it.

Ian: Your mum and dad, one day a year, for no particular reason, just out of the blue, suddenly decide to give you a great, big pile of presents.
Wolf: No, no, no. Because they love you so much! It’s a lovely story, dear.
Ian: Yeah, but it’s time to start living in the real world, yeah?

Wolf: Not often we get upstaged on a rooftop.

Clara: Oh, that noise. Never knew how much I loved it.

Shona: I need the toilet!
Bellows: No, you don’t. We’re monitoring your bodily functions.
Shona: And how are you monitoring that? Cuz that’s rude! That is … perverted.

Shona: All I could see was his nose, with all the little hairs coming out of it. Have you seen those? It’s like he’s got insects trapped up there, all trying to escape, with their wee, wiggly legs.

Shona: We’ve, we’ve got ghosts!
Ashley: Ghosts?
Shona: Yeah, yeah, it’s a skeleton man and a girl in a nightie!

Doctor: What is Danny Pink up to right now? He’s probably flirting with your neighbor or texting women of low moral character.

Ian: Shut your mouth, wise guy, or you get yours!
Wolf: It’s a balloon animal.
Ian: That’s a toy gun.
Wolf: Yeah, well, at least it’s unsuitable for children under four! Parts small enough to swallow, so watch out.

Santa: I got three words, Shona. Don’t make me use ‘em.
Shona: What three words?
Santa: My. Little. Pony.
Shona: Shut up, you!
Santa: Yeah? I’ve got lots more, babe.
Shona: I will mark you, Santa!

Santa: It’s an invasion, Miss Oswald.
Clara: An invasion of what, elves?
Wolf: Whoa! THAT is racist.
Ian: Elfist!
Wolf: Yeah, which is a bit hypocritical, from someone of your height.

Shona: The North Pole isn’t an actual pole.
Ian: Of course it is. Look.
Shona: If it was an actual pole, it would not be stripy.
Wolf: It’s got to be stripy!
Ian: Otherwise, you couldn’t see it moving around.
Wolf: It’s actually basic physics.

Doctor: You know what the big problem is in telling fantasy and reality apart? They’re both ridiculous.

Ashley: Is it possible I’m about to work with someone who might be a dream?
Doctor: If it helps, so am I.

Doctor: You alright?
Shona: Yeah, yeah, yeah. I’m trying to talk sense into Beardy-Weardy.
Doctor: You don’t seem much like a scientist.
Shona: That’s a bit rude, coming from a magician.

Doctor: How do you get all the presents in the sleigh?
Santa: It’s bigger on the inside.
Wolf: Ooh!

Doctor: The Dream Crab induces a dream state. Keeps you happy and relaxed in a perfectly realized dream world, as you dissolve.

Doctor: Clara, could you fetch me the dead one?
Clara: Maybe I could fetch you a cup of tea while I’m at it?!
Doctor: Ooh. Yes, and a punch in the face, too.
Clara: My very next suggestion.

Danny: How do you make you clever into me being clever?
Clara: I always protect your ego from the truth.

Santa: I can commit several million housebreaks in one night, dressed in a red suit with jingle bells. So, of course I can get back into the infirmary.

Clara: You remember Danny, of course.
Doctor: Not as well as you, clearly. You’ve made him a fraction taller.

Doctor: You have a pain right here. It’s like an ice cream pain, but gentle. Do you know what that is? The skin and bone have been parted, probably half an inch, and something has pushed right into the soft tissue of your brain and is very slowly dissolving it. I want you to picture it this way – Somebody has put a straw right through your skull and is drinking you. You should be screaming with agony, but there’s anesthetic. Everything around you right now, even Danny, especially Danny, that’s the anesthetic.

Danny: I didn’t die saving the world, Doctor, I died saving Clara. The rest of you just got lucky.

Danny: I’m a dream and you know I am, right? Right, one thing, but it’s important. It’s a very important thing. That is totally how you guessed all of my presents.

Danny: Do you know why people get together at Christmas? Because every time they do, it might be the last time. Every Christmas is last Christmas, and this is ours.

Bellows: So these creatures, when their feeding goes wrong, they die?
Doctor: The carnivore’s hazard. Food has teeth, too.

Doctor: There are some things we should never be okay about.

Doctor: Dreams within dreams – dream states nested inside each other. All perfectly possible, especially when we are dealing with creatures who have weaponized our dreams against us.

Santa: Yeah, just get it done, head towards the northern lights. Yes, I remembered to switch them on!

Santa: Oh, for Easter’s sake! Of course you’ve been dreaming! Haven’t you been paying attention?
Ian: Rudolph – did you see the nose?
Wolf: The North Pole? Come on, with stripes?!
Ian: This …
Wolf: is …
All: … a dream!
Santa: How much more obvious do you want me to make it? Because I can text the Easter Bunny, you know.

Shona: You’re a dream who’s trying to save us?
Santa: Shona, sweetheart, I’m Santa Claus. I think you just defined me!

Doctor: THIS is your mind, trying to tell you this isn’t real.
Santa: So it gives you me. Sweet Papa Crimbo!
Ian: It gives you comedy elves, flying reindeer.
Doctor: Exactly.
Santa: A time-travelling scientist dressed as a magician.
Ian: Classic!
Doctor: No, no, no, hang on. No, no, no, no.
Wolf: Living in a phone box.
Doctor: It’s a spaceship in disguise!
Santa: You see how none of this makes any sense?
Doctor: Shut up, Santa!

Doctor: No, look, we don’t need all this touchy-feely stuff.
Santa: Shut up, Doctor!

Santa: You are deep inside this dream, all right, and it is a shared mental state, so it is drawing power from the multi-consciousness gestalt which has now formed telepathically …
Doctor: No, no. No, no, no. Line in the sand. Santa Clause does not do the scientific explanation!
Santa: All right. As the Doctor might say, “Aw, it’s all a bit dreamy-weamy!”

Doctor: Why don’t you just go and make a naughty list?
Santa: I have, mate, and you’re on it!

Doctor: I’m not very good with this holdy-hand thing.

Doctor: This is very Christmassy, isn’t it?

Doctor: No need for chatting, you’ll only get attached. This isn’t Facebook.

Clara: Doctor, the others are still in danger.
Doctor: Only if they’re stupid. There are polar bears on this ice cap. Am I supposed to do something about that, too?

Doctor: There are lots of dangerous things on this funny little planet of yours, Clara, most of which you eat.

Doctor: Do you know what I hate about the obvious?
Clara: What?
Doctor: Missing it!

Doctor: As you were, no saluting. Are you the same people as before?
Clara: Of course they are!
Doctor: Sorry, I deleted you.

Doctor: The TARDIS! Come on! Come on!
Clara: Doctor, it’s not the real TARDIS.
Doctor: Well, let’s hope that I dreamed it really well, then.

Doctor: Come on, it’s Christmas, the North Pole, who you gonna call?

Clara: I’ve always believed in Santa Claus, but he looks a little different to me.

Doctor: You’re a dream construct, currently representing either my recovering or expiring mind.

Doctor: These are Christmas hats, I’ve seen people use them. You put them on and absolutely anything seems funny.
Clara: Oh, probably won’t work on you.

Doctor: No one ever matched up to Danny, eh?
Clara: There was one other man, but that would never have worked out.
Doctor: Why not?
Clara: He was impossible.

Clara: Doctor, am I young?
Doctor: No idea.

Clara: Well, look at you, all happy. That’s rare.
Doctor: Do you know what’s rarer? Second chances. I never get a second chance, so what happened this time? Don’t even know who to thank.