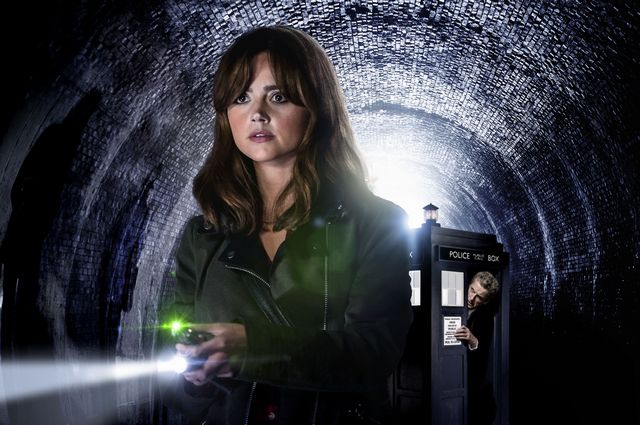 Doctor Who News: Jenna Coleman Moves in to the TARDIS for the Duration of Season 9

It had been expected for some time now that Jenna Coleman would be departing Doctor Who as of the Christmas Special.  At the very end of the episode, fans got a surprise when a graphic appeared saying, “The Doctor and Clara will return next year in The Magician’s Apprentice.”  That definitely told us Clara Oswald would be appearing in at least the first episode of season 9, but, really, that was all.

More details surrounding the news of Coleman’s decision to stay were reported in The Radio Times and The Hollywood Reporter.  I only became aware of this news thanks to fellow Whovians Aaron Sagers (@aaronsagers) and Meredith Jacobs (@MeredithJJacobs), who each shared those links respectively.  Meredith had reported the news on Inquisitr wherein the link to the Radio Times article was embedded, but she also linked to this BBC News report on the fact, so you know it’s concrete information.

Give those TARDIS-loving nerds a follow on Twitter by clicking on their handles linked next to their names, because they’re full of information, whereas I’m just “full of it.”

Several weeks ago, I’d read rumors that Clara would not be leaving at the Christmas Special, but would stay on for about half of season 9.  In the article, it stated that Coleman made the decision to stay somewhat late in the game and some semi-frantic rewriting of the Christmas episode had to be done to accommodate her decision.  Those rewrites, if they did happen, had to revolve around the scene when the Doctor visits Clara as an old woman some 62 years in the future.  The speculative article said Clara was going to pass away as an old woman with the Doctor by her side, so this scene has got to be the place were the writers turned the ship around and made that sequence just another Dream Crab mind trip.

It has been reported that Coleman and Capaldi have great fun working together.  According to Coleman, this is why she decided to remain with the show for the entirety of season 9.  Below is a snippet from the BBC News report which quotes both actors speaking about this turn of events.

“It’s wonderful,” she said. “I get a whole other series of stories with the Doctor and I couldn’t walk away with the story being unresolved.”

She added: “There is so much more to do. I think they’ve finally just reached a point where they really understand each other.

“The arrival of the 12th Doctor has just kind of dropped this whole bombshell and allowed the dynamic to totally change, so I think just when Clara was feeling more comfortable in the relationship, it has suddenly thrown something new up.”

Capaldi said: “I’m thrilled. Jenna has just been fantastic and such a pleasure to work with.”

One thing I’ve noticed, and maybe this is just because it’s so early on, is that nowhere does it mention Coleman is only staying for one more season.  If the pair are having fun, perhaps we could have Clara along for more adventures past the next round of episodes.  Even if she doesn’t, hanging around for another go means that she’ll become the longest-serving companion of the “new” Doctor Who incarnation.  According to the Radio Times, by the end of season 9 Coleman will have 36 episodes under her belt compared to Karen Gillan’s 33,

Another thing I’ve noticed, and you probably did, too, is the title of the first episode of season 9 is The Sorcerer’s Apprentice.  One can assume said sorcerer is the Doctor, as he’s been referred to as a magician in a number of episodes due to both his sartorial inclinations and his ability to pull a win out of a hat even in the most dire of situations.  And we can presume the apprentice is Clara Oswald since she’s taken on a more proactive role in the TARDIS and even served as surrogate Doctor in Flatline.  She also faked out a Cyberman in Death In Heaven by telling him (it?) she was, in fact, the Doctor.  Actually, throughout season 8 there were numerous incidents where Clara was very Doctor-ish.

Clara’s very good at being the Doctor and I could honestly see her playing the role with great success.  Perhaps The Sorcerer’s Apprentice is going to build on Clara’s tutelage as a surrogate Time Lord?  After Michelle Gomez killed it playing the Master and Coleman owned the role of the Doctor, fans were shown that a female Doctor would definitely work.  And work very, very well.

Check back frequently for Doctor Who news and follow Three If By Space here and on Facebook for all things geeky.