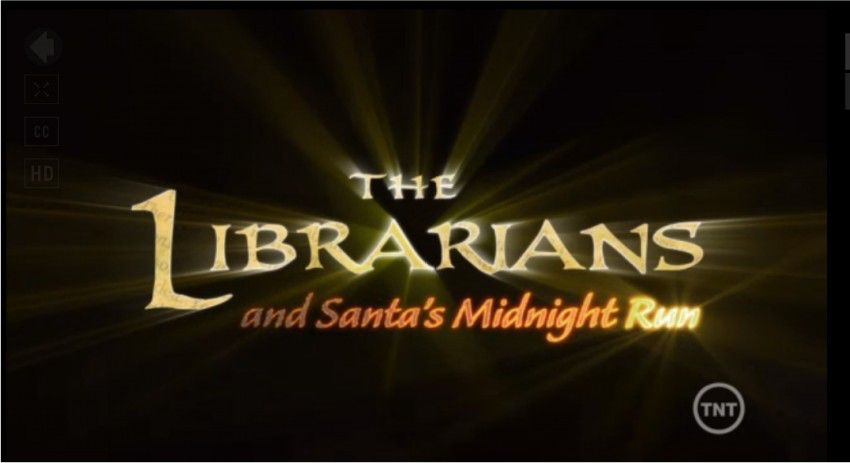 TNT’s new series The Librarians gave us our Christmas present: a sweet, good-natured Santa episode. Santa, played by Bruce Campbell, is helping out at a London soup kitchen when he is grabbed by the Serpent Brotherhood. Jenkins (John Laroquette) has to educate the Librarians, and guardian Eve Baird, on what – and who – Santa really is. “Santa is an immortal avatar of good will. That’s why everyone’s always cranky around the holidays- because we’re running out of good will,” he tells them. If Santa isn’t recovered, Christmas will be cancelled – for the entire world. “If Dulaque has him, we know what happens next – he kills him. Dulaque kills Santa Claus,” Jenkins adds. Cassandra’s very excited to find out that Santa is real – her parents wouldn’t let her believe in him, feeling that it would stunt her educational growth. But she’s turned into quite a cute Christmas elf, despite her parents’ restrictions! 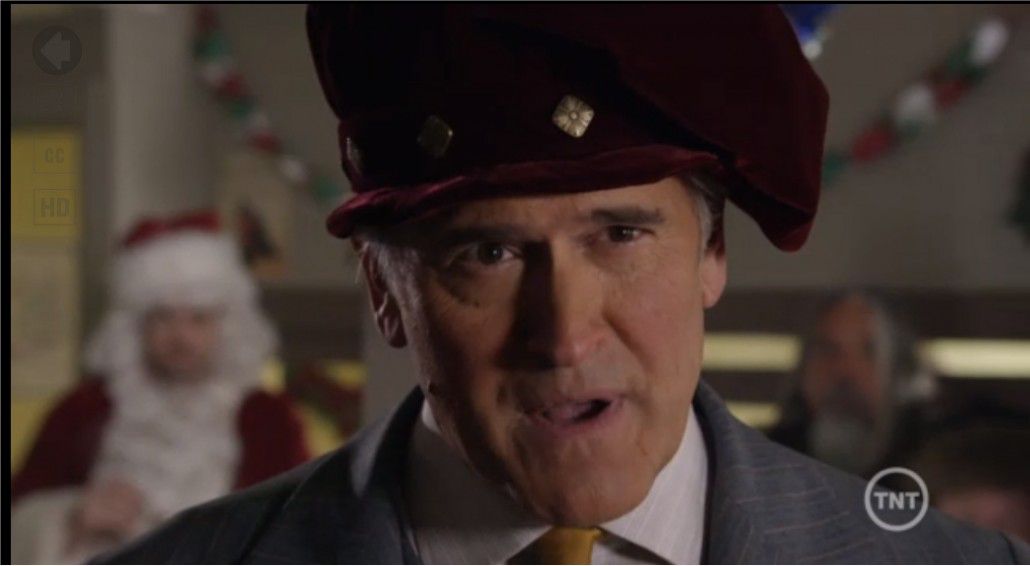 Through Ezekiel’s masterful manipulation of London’s many observation cameras, they are able to track Santa and Dulaque to a historically significant building, which thrills Stone. “I thought you were into art, not architecture,” Baird says. “Architecture is just art we live in – why doesn’t anybody get that?” he responds (at least they’ve stopped putting Christian Kane in those ridiculous scarves he wore in the premiere – they had him in a knit cap all night – why do they have to do something funky with his wardrobe each episode?). In order to give Ezekiel and Cassandra time to come down the chimney and rescue Santa, Stone and Eve juggle precious artwork. 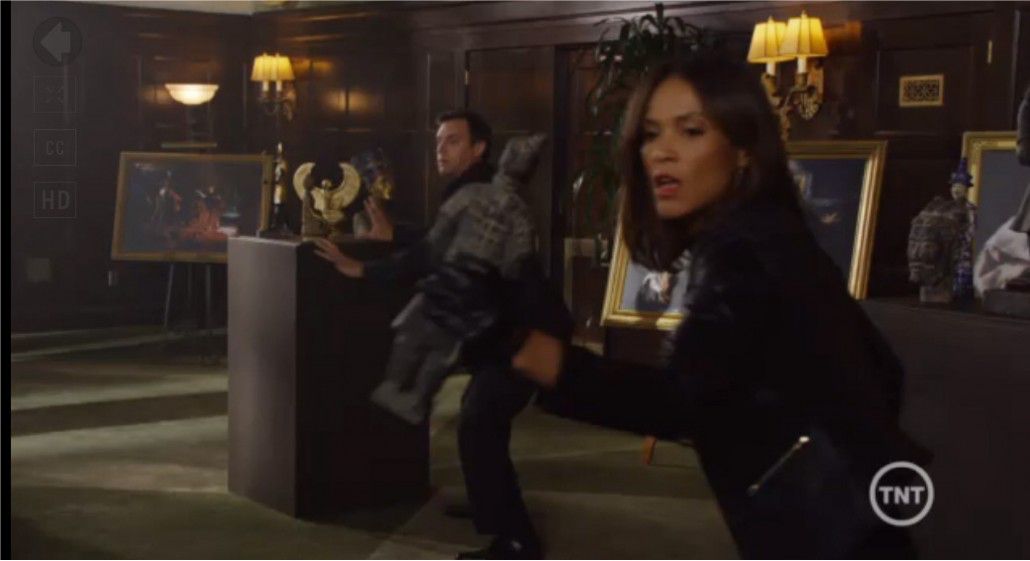 Santa insists that he must return to the North Pole that evening. To keep him from being pursued by Dulaque and Lamia, Eve puts Santa’s hat on Ezekiel. Santa takes Eve to a shipping yard where he’s left his sleigh – he thinks. But it’s not there. “Somebody jacked Santa’s ride,” he tells Eve, speaking in the third person, which irritates Eve.

Meanwhile, the hat, Santa’s talisman, causes Ezekiel to distribute good will – leading children around singing, handing out money to homeless people. While it seems to surprise him that he’s doing these things, his character is always so cheerful and cute that it’s hard to believe he’s really a thief on Santa’s naughty list! (And, frankly, he doesn’t really seem to have the background of the other two that would have qualified him to be a Librarian, but I guess every show needs a good tech guy.) 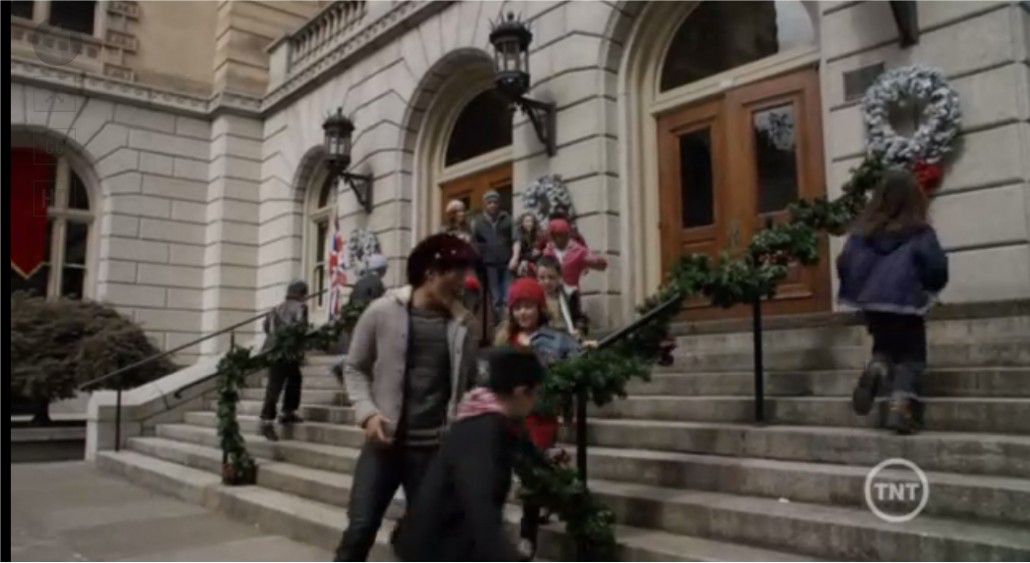 Eve and Santa grab a truck and head off to the North Pole –  “Great. Road trip with a psychotic shape-shifting avatar of goodwill,” Eve complains. “Santa thinks that will be a mouthful if you have to say that everytime you want to get Santa’s attention,” he replies. This show is nothing if not sweet (and family-friendly, which is a big part of it’s appeal!). Of course, the truck runs out of gas. Jenkins dispatches Ezekiel and Cassandra to charter a plane – and Ezekiel, under the influence (of Santa’s hat), gives the pilot money for his wedding, and sends him off to spend Christmas eve with his fiancee. “Did I just do that?” he asks Cassandra. “Yuppers.” Stone, meanwhile, is sent to pick up Santa and Eve – somehow wandering into a bar, where Santa transfigures into another personality, this one Odin, god of war. Of course, a bar fight follows! But being the family-friendly show this is, the most we see of the fight is “Odin” breaking a beer glass over his head and the bar owner threatening the group with a hockey stick.

Eve is definitely a Scrooge – won’t let Santa get out three “ho”s in a row, won’t even call him Santa. She tells him that she’s been in many places on many Christmases, and it’s always the same story, whether it was on a deployment or with her parents. Santa’s got it figured out –  “Maybe that’s why Col. Baird feels like she has no place she belongs. But as long as you’re with other people, you belong.” Turns out she was born on Christmas Eve (hence the name). 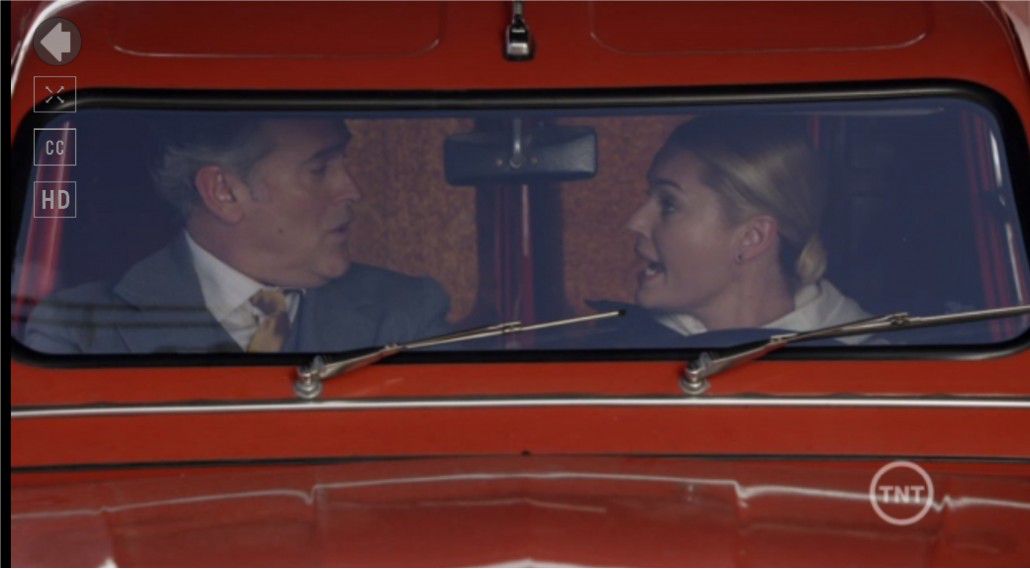 Despite the loss of the pilot, Santa is able to get the plane up in the air – after all, he has experience making large objects fly. But the poison Dulaque gave him, combined with not wearing his talisman hat, is taking its toll. And as Santa grows weaker, Dulaque and Lamia enter the plane through the cargo bay – while the plane is in flight – to retake Santa and “kill him at our leisure.” But Dulaque is momentarily outwitted by putting the hat on, and ends up jumping out of the plane to follow Lamia, who he’s ordered to fly out on the sleigh. Is he dead? Jenkins tells them he isn’t, that he’s made of stronger stuff. So we’ll see him again! Matt Frewer had a couple of Max Headroom flashbacks (if you are younger than I am – not surprising – and Max Headroom means nothing to you, watch here), which were highly entertaining – he was able to restrain himself when he gueststarred on Falling Skies, but Dulaque is sort of an eviller Max, so it was appropriate! 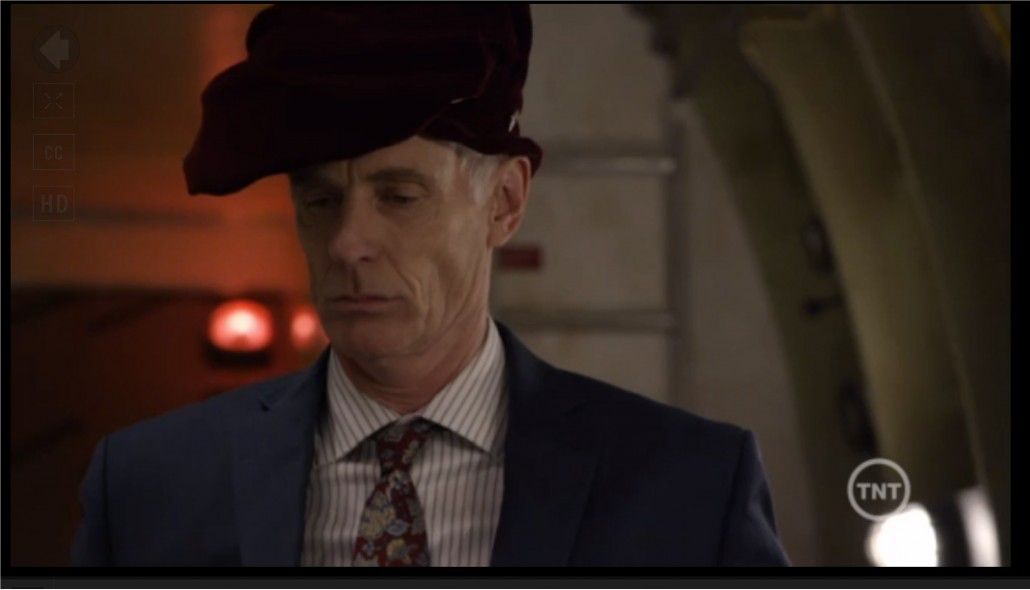 But as Santa gets weaker, he needs to find a vessel to take the gift of goodwill from him for this Christmas Eve and deliver it to the world – “Someone else must channel the power. Someone else must be the Santa for just this night. There is noone here more in tune with Christmas than the baby born at the last stroke of midnight. So named by her parents as the girl born on Christmas.” And Eve, despite the danger and possibility that it will kill her, delivers the good will – she helps an EMT continue to work on a patient, helps a woman planning suicide, and gives another woman courage to protest against an oppressive government. But if it killed her, what would happen to this show? So of course, Eve is returned whole and safe.

And in the end, everyone gets their Christmas wish – Stone got into a bar fight; Cassandra got to believe in Santa; Jones got to find out what it’s like to be the good guy. 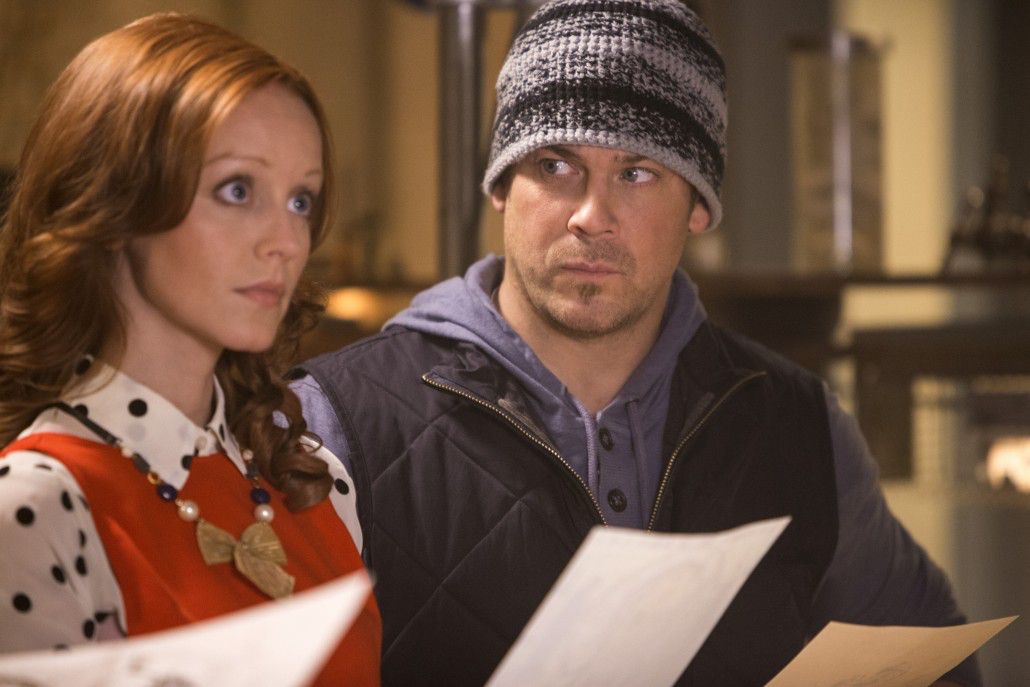 This show is cute and slightly cheesy, but enjoyable. Unlike a lot of sci fi shows, it’s definitely family-friendly. I think Warehouse 13 did the “magical artifacts capture and storage” theme better, but The Librarians is worth a watch, especially since Warehouse 13 is done and gone. What do you think, especially if you’ve watched both?