Ladies and gentleman, welcome to the “everything hurts and nothing is okay” Arrow hour. Oliver has been gone three, almost four days, and Team Arrow is reeling in his absence. Without him, the team is in free fall mode. They’re trying to continue as normal, Diggle donning Oliver’s hood and Roy using Oliver’s motorcycle to chase down bad guys. Felicity’s trying hardest of all, keeping them safe through their comms and vehemently denying any reason to even think that Oliver might not be coming back.

And there it is, the first stage of grief: Denial.

Felicity is the vessel through which we see the five stages of grief most clearly during “Left Behind.” She is the one who most wants to cling to the idea that there’s some other explanation for why Oliver hasn’t returned or contacted them. Even when Diggle tries to be the voice of reason, telling her to prepare for the worst, Felicity still denies it. And why wouldn’t she? Oliver is a survivor. She believes this so fiercely that she must continue on as normal and wait for Oliver to come back. No other option is imaginable.

But then Malcolm Merlyn has to go and f**k everything up. He shows up in the Arrow Cave two different times, first to not-so-subtly drops hints that Oliver’s probably dead, and then to prove that, yep, Oliver’s dead.

This is about the right time to introduce the second stage of grief: Anger. 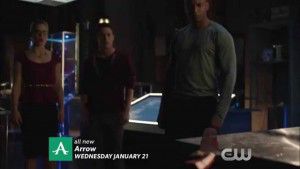 That’s not Oliver’s blood! Can’t be. Oliver doesn’t bleed. Guys, back me up here.

With Malcolm in the Arrow Cave, Felicity loses it. She takes her anger and hurls it at Merlyn, completely justified in doing so because it’s all his fault. Ra’s al Ghul may have stabbed Oliver through the chest, but Merlyn was the one who sealed his fate. Using Thea against Oliver was unforgivable, and Felicity—despite not being an archer, or assassin, or anything that Malcolm would find intimidating—tells Merlyn exactly what he is. A monster. Oliver would be proud of her. You know, if he wasn’t, kind of, dead. Even if the audience knows he’ll be back eventually.

Despite the news, and despite the bloodied scimitar that Merlyn leaves with Team Arrow, Felicity still feels duty-bound to her other job at Palmer Tech. Ray, oblivious to everything besides his A.T.O.M. tests, still wants Felicity to help in his crusade to become Starling’s newest vigilante hero. But now that Oliver is gone, and she’s starting to actually believe it, Felicity begs Ray not to go through with his plans. In her eyes, he’ll only end up dead. This is when we see Felicity at her most vulnerable, on the verge of tears, telling Ray that when you lose someone you love, there is nothing you can do to bring them back. Not even dressing up like a hero to save a broken city. 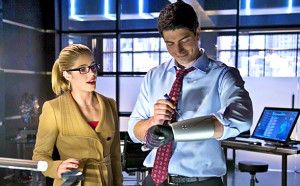 And what’s the fourth stage? You guessed it: Depression.

In the wake of the blood being a 99.997% match to Oliver, Felicity, Diggle, and Roy are trying to muddle through the loss of their light. They are all equal members of the team, but Oliver was their glue, their light in a dark world where justice has to come from behind a mask. Starling is brutal to them all, and now more so than ever because Oliver isn’t there to guide them like the beacon that he is. They try to salvage their current case, which introduces a compelling new villain called Brick. This case, and Brick himself, threatens to undo everything Oliver has worked toward since stopping Slade. But Roy and Diggle fail to stop him, and all because Felicity didn’t want to lose anyone else. 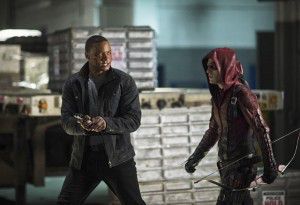 Roy: Where’s the Arrow suit? Diggle: Hey, that thing is too tight.

The idea that Oliver is Arrow’s light isn’t taken lightly either (see what I did there?). Felicity even makes reference to it during two stages. First, in Denial, when she mentions leaving the lights on, and then in Acceptance, when the lights get turned off.

And since we’ve now reached it, let’s talk about the fifth stage of grief: Acceptance.

Towards the end of this episode, Felicity leaves the lair, presumably turning the lights off, leaving Roy and Digg in darkness. She also returns to Palmer Technologies once more to tell Ray that she just lost someone, and she refuses to be part of Ray’s suicide plan. This is Felicity getting out of vigilantism. She has to, or she’ll drown in it. Without Oliver, she can’t be strong enough to handle the danger, the sacrifice, and the pain.

But let’s not forget the light at the end of the tunnel: Maseo and Tatsu!

In my mind, the person to fetch Oliver’s body off the mountainside had to be either Maseo or Malcolm. And since we learned earlier in the episode that it wasn’t Malcolm, it had to be Maseo. But Tatsu’s appearance was a surprise because I thought her kidnapping would end badly (although that gives me the bad feeling that something’s going to happen to their son…).

Then came the moment we were all waiting for: Oliver opens his eyes. (In Dr. Frankenstein’s voice, “HE’S ALIVE!”)

So what’s the verdict? Zombie Oliver or Only Mostly Dead Oliver? Taking all bets! (In the words of the great Miracle Max: “It just so happens that your friend here is only mostly dead. There’s a big difference between mostly dead and all dead.”) 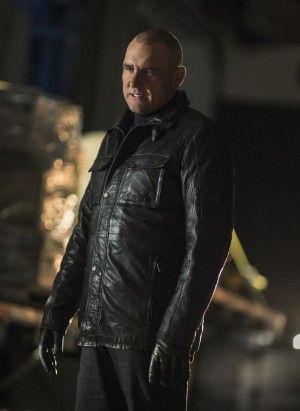 Brick is the bet manager. His money’s on Zombie Oliver.

Okay, in all seriousness now, I give this episode 10 out of 10. The portrayal of everyone dealing with Oliver’s loss was spectacular from the whole cast. The flashback scenes were a great way to explain Maseo saving Oliver, too. Plus, we see Laurel suit up as the new Black Canary, though it’s still early to make any judgments on that.

The only part of the episode I thought could have been better was Malcolm’s errant popping in and out of places. It was awkward, especially at the end with his quick explanation to Thea that they had to leave Starling and never return. But that wasn’t enough to spoil this overall excellent episode. I look forward to what the next one will bring. 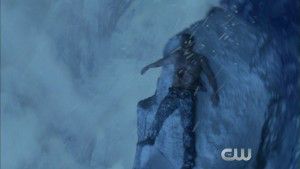