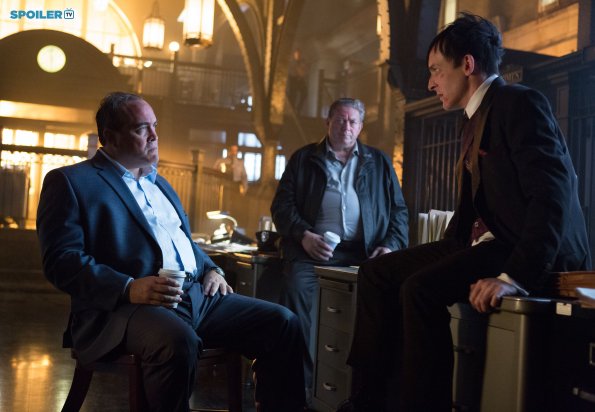 Gotham: 1×12 Review – What the Little Bird Told Him

By: Alisha Bjorklund January 20, 2015
TV Reviews Gotham, what the little bird told him

The little birdies on Gotham are all atwitter in this week’s new episode, appropriately called “What the Little Bird Told Him.” So let’s jump right in. Spoilers ahead!

Penguin is the “Little Bird” and Falcone is “Him.” The “What” is Liza. Finally, the truth comes out that she is a plant set by Fish Mooney to woo Falcone’s heart and make him vulnerable. I’m surprised it’s taken this long to be revealed to him, honestly.

At first, Falcone doesn’t believe it. Rather, he doesn’t want to believe it. That I can understand. What I can’t understand is why the master plan was to fake Liza’s kidnapping and hope that Falcone loves her enough to give up everything and leave Gotham. It makes a lot more sense for Liza to assassinate him or conveniently open his bedroom door for a sniper or something. Fish’s actual plan comes across as a bit ludicrous. 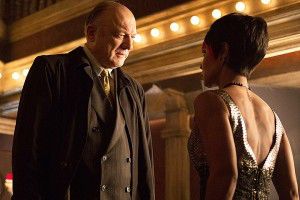 What also comes across as ludicrous is Fish’s sudden sympathy toward Falcone. It’s true that she and Falcone have a long and complicated history, but she’s spent so much time and killed many people in an effort to overthrow him, yet she can’t imagine killing him. She claims she’s doing him a favor. But why? Since when has that been motivation for her?

Nevertheless, we are given some fine acting from the cast. Especially in the confrontation scene when Falcone reveals that he knows—courtesy of Penguin—Liza was trained by Fish to trick Falcone into loving her. Most of all, Falcone can’t forgive that these two women have used his love for his mother against him. The most dramatic moment was when Falcone chokes the life out of Liza and then locks Fish and Butch away. But not before Penguin saunters in to reveal that he was the one who ruined Fish’s whole plan.

While the mob stuff was happening, Jim Gordon spent his time chasing down Jack “The Electrocutioner” Gruber—whose actual name is Jack Buchinsky. He’s out of Arkham Asylum and causing electrified havoc in Gotham, although most of it is overly complicated and doesn’t accomplish much. But hey, he’s still doing bad guy stuff. 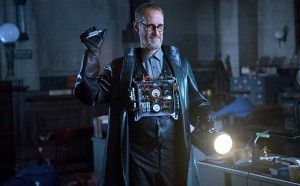 First, he takes his lobotomized henchman (who Buchinsky calls his “finest work”) to an abandoned factory where he gets some new, electrified toys. Second, he goes after Maroni and crew, sending in some kind of electricity bomb that only makes everyone red in the face. And third, his great shining moment, was to send a massive amount of electricity running through the entire GCPD police station. The stunt was flashy and had a great build up, but ultimately, it was a failure because all that resulted in was a power outage and a station full of stunned cops. Except Jim Gordon. Jim remembered to wear his rubber galoshes. 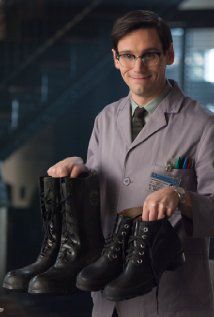 Buchinsky and Gordon have a stand off, and as usual, it doesn’t take much for Jim to get the upper hand and render the bad guy powerless. The GCPD commissioner then reinstates him as a cop, and they share an intense moment that is basically summed as this: “Jim Gordon ain’t takin’ any more of your shit.”

Like the episode before this one, we get a few fun moments between Gordon and Bullock. Also like Episode Eleven, this one manages to stay focused on its two main storylines, barring the random scenes involving Barbara and Ed Nygma. At least Nygma’s scenes were relevant because he works with Gordon and Bullock. I’m sure Barbara with her creepy parents was setting up for upcoming episodes, but did she really have to be in this one?

Let’s not forget that the episode closes with Jim and Dr. Tompkins in a passionate lip-lock. Guess he’s ready to move on from Barbara. And you could see that coming from far away.

Jim and Gordon had a pretty easy time of cracking this case, and I was disappointed that little came of the Electrocutioner storyline. I’m glad that the rivalry between Fish and Falcone came to a head, something that his been building for many episodes. However, I did expect more from Fish’s endgame. 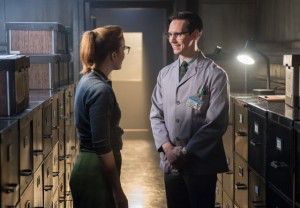 So what’s the verdict? I give this episode 6 out of 10. Not Gotham’s best, I’m afraid. Overall the episode wasn’t terrible, but I can’t ignore the poor payout. After saying he’d spent most of his life building up his legacy, it wasn’t believable that Falcone would give it all up for Liza. It also wasn’t believable that Fish’s plan didn’t involve making sure Falcone was out of her way for good. Letting him live leaves too much room for trouble later. What if he came back? What if he found out Liza’s secret? And though it was good to see Jim back with the GCPD gang, the Electrocutioner’s poor planning made him seem much more incompetent than in the last episode. To me, the episode’s only saving grace was Ed Nygma. He keeps endearing himself to me in his scenes because he means well and has amusing riddles. But he just can’t catch a break with Ms. Kringle.

Commissioner to Gordon: “Where do you get this rebellious fire in your belly?”

Bullock to Nygma: “No, Ma, I’m not going to wear my rubbers on the case.”

Penguin says to himself about Fish: “You’re mine now.”

Gordon to Commissioner: “Next man who tries to take away my shield, one way or another, I’m going to make him eat it.”

Ed Nygma to Ms. Kringle: “A beautiful woman is a dangerous thing.”