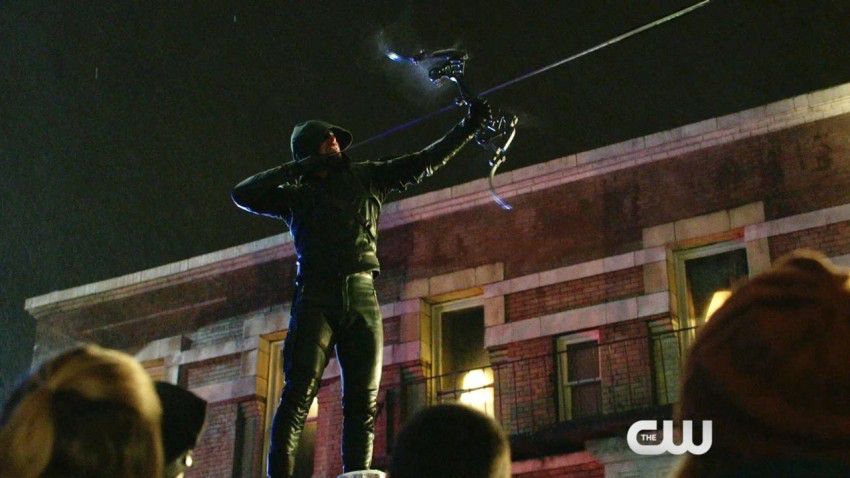 He’s baaaack! Well, not right away, but by the end of this week’s Arrow episode, Oliver Queen (and by extension, the Arrow) is back in Starling City. But first, he has to make the hazardous journey back from wherever that secluded cabin in the woods is located.

While Oliver’s making his way back, the rest of Team Arrow is busy dealing with Brick’s takeover of the Glades. Thugs are running rampant without a police presence, stealing money under the vague pretense of “taxation” and intimidating every citizen they come across. The team (particularly Laurel and Roy) are doing everything they can to stop the chaos and do what the police cannot. But they can only do so much, and that’s what brings them to consider Malcolm Merlyn’s help.

As a side note, I have to ask: When Arsenal and Black Canary are out kicking butt, why isn’t Diggle with them? Felicity’s back on the team, so what do they gain by having Digg stay in the Arrow Cave? As far as I can tell, nothing. But at least he’s out helping when the big showdown happens. 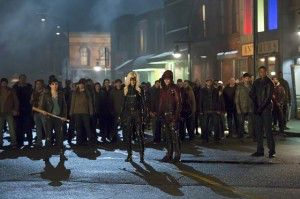 “Daniel Brickwell . . . you have failed this city.” – Arsenal

Laurel is obviously improving her skills, but her ongoing plan to masquerade as Sara met a difficult hurdle: a familiar face named Sin. Don’t misunderstand, I’m happy Sin is back, but when she catches a glimpse of Laurel, she thinks it might be Sara . . . until she realizes that it definitely isn’t Sara. As luck would have it, Sin runs into Captain Lance and drops the bomb that “Sara” isn’t Sara. I expected Lance to find out about Laurel’s lies, but I didn’t expect it so soon. I can only imagine the drama that will go down once Lance learns about everything that Laurel has done. But in a way, that’s good. Lance deserves the truth, even if it hurts him so, so much.

Malcolm Merlyn’s backstory was great, enlightening and entertaining, but I have to admit I was a little bit of a disappointed. The flashback scenes were well done, but they didn’t share much that we didn’t already know. However, it was very dramatic to see Malcolm’s transformation from loving familyman to coldhearted killer. The standoff between Malcolm and the man he thought killed Rebecca was intense, and the scenes with young Tommy, though brief, were heartbreaking (in a good way). 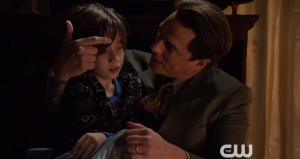 “I won’t let anything bad ever happen to you.” – Malcolm Merlyn

On top of seeing what led Malcolm to the League of Assassins, we also saw his initial arrival and how he got his nickname, The Magician. Through the whole subplot, Malcolm slipped away from what was good in his life, leaving it all behind in an effort to protect what he loves. But it twisted into a perverse version of what he envisioned. Since Oliver will be spending more time with him in upcoming episodes, it seems that we’ll likely see a redemption story for Malcolm. I’m on board for that, especially since, despite the horrible things he’s done, I feel bad for the guy.

Overall, the subplot with Malcolm’s past was revealing and believable. I had just hoped for more, more secrets to be revealed. The flashbacks definitely supported Malcolm’s current mindset that he is a killer and nothing else (even if Thea believes he can be more than that).

Speaking of Thea, I want to touch on her scene with Roy. They discuss Malcolm and Thea tells Roy that her father had no ulterior motive for rescuing her the night of the Undertaking, which is what leads Roy to think that Team Arrow should join forces with Malcolm. But I disagree. Soon after he rescued her from the Mirakuru soldiers, Malcolm asks Thea to join him in Corto Maltese (arguably where his plan to turn her into a killer began). So can it really be believed that he didn’t have an ulterior motive for saving Thea? Couldn’t he have already been plotting his “salvation” from the death warrant the League has on his head?

Moving on, we get to the big dilemma of the episode: Team Arrow deciding whether or not to accept Malcolm’s help. Felicity, unwavering and resolute, is against having anything to do with him. She firmly states that Oliver would never be okay with a plan that involves having Malcolm as an ally (which is why it hurts all the more when Oliver tells her that he is working with Malcolm). 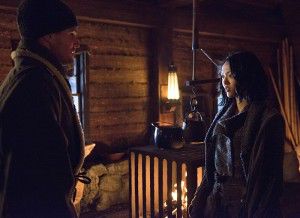 “You have to be willing, not just to die, but to know what you have to sacrifice in order to beat him.” – Tatsu

So why does Oliver decide to train with Malcolm? The answer is partially found in his conversation with Tatsu. She follows him on part of his journey back to Starling to make sure he drinks his penicillin tea doesn’t die again. When they part ways, she tells him that he has to give up what is most precious to him if he’s to have any chance of defeating Ra’s al Ghul. He has to be willing to not just die, but sacrifice. For him, that sacrifice translates into choosing the Arrow over Oliver Queen. Again. Not only that, but he must lose who/what he loves most. Oh, Oliver. Isn’t that what everyone (Felicity, Digg, Barry, etc.) is trying to get you to not do?

Next up is the biggest and most dramatic scene of the entire episode: Oliver and Felicity’s showdown conversation in the alley. She is pissed that Oliver allied himself with Malcolm Merlyn, and for good reason. Felicity fiercely believes, especially in the last two episodes, that Malcolm is a monster. And now Oliver is compromising his humanity—the thing that’s supposed to make him a hero—to “get into bed” with that monster. He’s willing to work with Malcolm, even though that monster used the sister he loves to kill the woman he used to love, because the ends justify the means. But in doing that, he’ll lose the good, the light, still inside him. The soul is being chipped away, and Felicity can’t stand that. She can’t bear to watch him fall just for the chance to defeat Ra’s al Ghul. 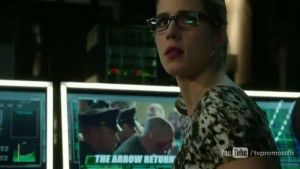 “I don’t want to be a woman that you love.” – Felicity Smoak

Both Emily Bett Rickards and Stephen Amell were brilliant in that confrontational scene. It was incredibly dramatic and heart wrenching in the best possible ways. Felicity was absolutely right to call Oliver out on what he’s doing and how bad it is. And Oliver’s pained face was soul crushing. Even at the moment of their reunion, Oliver was reserved because he knew what he had to tell her and the rest of the team. Oliver must have known that Felicity would hate his decision. But that doesn’t stop him from going through with his plan. He goes through with it because doing whatever it takes to beat Ra’s has become the only way he knows how to love. He loves people (and his city) by protecting them.

So what’s the verdict? I give this episode 9 out of 10. Identity is a huge factor this season, and I’m really enjoying the way the show is presenting it and weaving it into the storylines. The notion of ‘confronting harsh truths’ is another part of this episode that I feel was well excuted. Plus, Oliver’s scene back at the foundry (and follow-up with Felicity in the alley) was amazing, meaningful, painful, etc.

However, I can’t call this episode perfect. To start, a few things really bothered me, including Wildcat. His appearance was great, but what the heck happened to him after being badly injured? It was glossed over after Oliver showed up. Another detractor was Oliver’s initial return. It was a bit anti-climactic to have his first big onscreen moment in Starling be with Malcolm, even if it was to stop him from killing Brick (therefore saving what’s left of his soul). But Oliver’s rousing speech at the Glades helped make up for it. Overall, it was an important and enjoyable episode.

Here’s one last errant thought: Was it just me, or did Felicity look more like a Queen than Oliver in that one scene at the foundry, sitting on her chair like it was a throne? 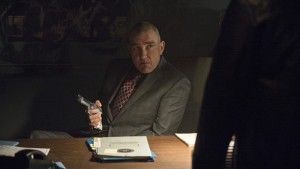 Oh, please. I control the market on throne-sitting. – Brick, probably

What did you think of episode? Share your thoughts in the comments!

Some more great dialogue to highlight:

“I’ve seen you wearing a red hoodie. I’ve seen you shooting arrows at people. You think I don’t recognize you with a little extra leather and lace?” – Lance to Roy

“For almost a month, I allowed myself to fantasize. To dream that maybe, just maybe, Merlyn was wrong. That you were alive. That you would come back, and when you did, you would be different.” – Felicity to Oliver

“Only the student has hope of defeating the master.” – Malcolm to Oliver

“Oliver was certainly lucky to have you.” – Laurel to Felicity