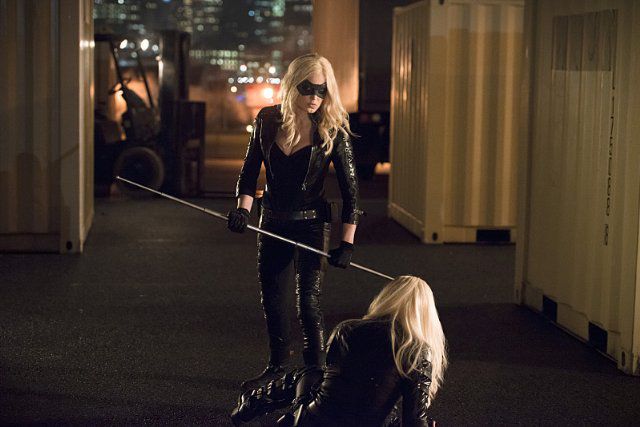 Arrow’s ongoing theme of identity continues! This week’s episode was packed with physical and emotional tension. From the ongoing threat of Ra’s al Ghul and Vertigo’s return to Thea learning the Arrow’s identity and Laurel struggling against her inner demons, “Canaries” had a lot of great things going for it.

When Werner Zytle (AKA Vertigo) escapes to cause havoc on Starling’s streets, Team Arrow suits up to track him down. Laurel is right there in the fray as well, much to Oliver’s dislike. He angrily tells her to stop, but she won’t back down. And it’s not just Laurel that Oliver is butting heads with. The dynamics of the team changed while Oliver was away, and, as Felicity points out, they can’t go back to the way things were just because Oliver is back as the Arrow.

Team Arrow is shaken up this week because everyone has new priorities; a new vision of what they fight for. Oliver isn’t the only one calling the shots anymore, and this episode did a great job showcasing the dramatic tension between everyone. They all have valid points for how they feel, and in that way, I didn’t side with one member over another. Even Oliver had credit in the argument; he just got back and never expected so much to be different. But to everyone else’s credit: they thought he was dead for a month. That’s bound to shake up how the team operates. 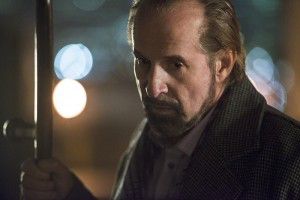 Laurel is still trying to establish herself as Sara’s replacement, but there in lies the problem: She can’t be a replacement; she has to be her own self, her own kind of hero. Her arc pairs nicely with Zytle’s ambitions, and when she is dosed with vertigo, she hallucinates Sara attacking her, both physically and verbally. She carries so much guilt and grief that it manifested into a nightmare, and the way Arrow presented it was very well done. It was heartbreaking not only to see Sara back and accusing Laurel of awful things, but also when her hallucinations manifested into her father attacking her as well.

And, just as we all knew it would, the truth finally catches up to Captain Lance when Laurel gathers up the courage to tell him what happened to Sara. It was especially heart-wrenching to see that Lance already figured out that Laurel was the one running around in Sara’s outfit and he thought that was the secret Laurel was admitting. The way he broke, knowing without it being said that Sara was dead, again, was very real and very convincing. Because of that, it was also very tough to watch.

It’s yet to be shown if and how this reveal will affect Quentin and Laurel’s relationship, but it was ultimately good that Laurel finally owned up to her lies. Plus, her scene with Felicity was great. They are shaping up to be friends; the kind of friends that help convince each other that they can be more than what they think they are.

Continuing with the identity theme arc, the big reveal in this episode was Thea being brought down to the Arrow Cave. When she realizes that her big brother is the vigilante, she surprisingly responds with gratitude rather than anger. I’ll admit, I was surprised, but it was nice to see the show take her reaction in a direction different than expected. Besides, with everyone else baring their teeth at Oliver, it was good for him to have someone on his side. 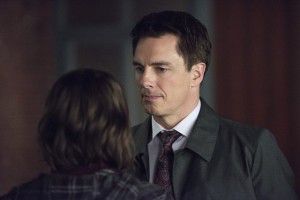 “You manipulated me.” – Thea to Merlyn

While on the subject of Thea, I must admit I found her behavior odd in this episode. Not just that she wasn’t angry at Oliver at all, but also that she suddenly turned on both Malcolm and Chase. It’s not so surprising that she felt like Malcolm manipulated her (Oh, honey, if you only knew), but I did have a hard time with her sniff-the-wine-and-automatically-think-Chase-is-an-assassin thing. Actually, every Chase-related thing in the episode was ridiculous.

I understand that Thea wanted a simple fling with Chase, but her complete reversal on him was so sudden I almost got whiplash. And then Roy and Malcolm show up at the perfect moment to help her. I comically had this notion in my head that both of them were standing just outside Thea’s door, waiting for her to finish up her romp with Chase, and then come crashing in as soon as they heard shouts. How awkward it would’ve been if they’d shown up just a couple minutes earlier! 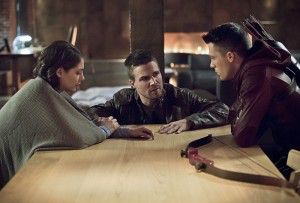 “Apparently, he’s been more yours than mine lately.” – Thea (about Roy)

We also got a few more flashback scenes with Maseo and Oliver, which were exciting and enlightening. Not only did we learn that Oliver was tortured (both bodily and by threat of hurting Thea), but that Maseo anticipated it and wanted to get captured as soon as Oliver was taken. Then, another big shock for the night: Oliver returns to Starling City! But in the custody of Waller. I look forward to seeing what else these flashbacks will reveal in upcoming episodes.

And because it feels wrong if I don’t, let’s touch upon Oliver and Felicity for a moment: By teaming up with Merlyn, Oliver created a realistic and viable reason to keep him and Felicity apart. Instead of making it a fight about miscommunication or hurt feelings, it’s about a difference in their values. In “Uprising,” Felicity was very clear about her stance and her belief on not cooperating with a monster like Malcolm, and in “Canaries” that stance has not changed. She is still very much a part of Team Arrow because the team is about more than just Oliver now.

But Oliver’s decision is also resolute, and neither of these two will budge in what they believe. So they aren’t together romantically. And that’s good. It’s respectful to them as characters and respectful to the arc of their story together. They need to be apart until their beliefs line up again. And if we get more emotional drama and compelling acting along the way, all the better.

So what’s the verdict? I give this episode 9 out of 10. It had a lot of intensity and exciting action and reveals, but I had to take a point away for the Thea and Chase. Actually, let’s say it’s all because of Chase. His connection to the League didn’t pay off very well, and as a result, both he and his plotline ended up dead on the floor. Plus, Thea’s behavior was downright weird at times. But I think the continuation of everything else is going well.