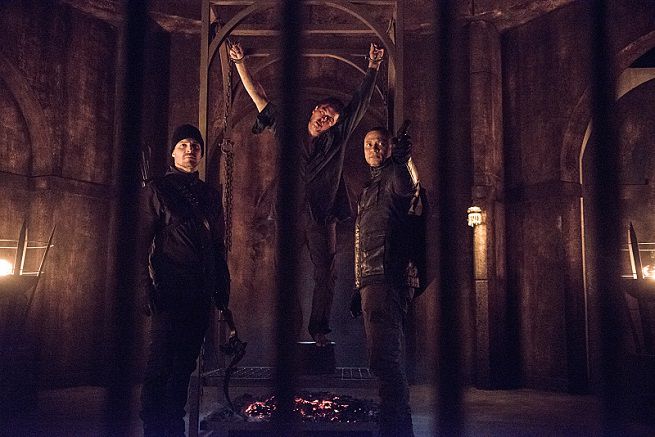 There are two things that Arrow has time and again proved that it knows how to deliver through its episodes: emotions and secrets. In a recent interview, executive producer Marc Guggenheim said that secrets are like the show’s currency. Well, tonight’s episode was all about showering us with riches. And what does secret sharing lead to? That’s right, lots and lots of emotional turmoil.

As she was in recent episodes, so again did Thea become a driving force in “Nanda Parbat.” Thea is the one revealing secrets, Thea is the one Oliver would do anything to save, and Thea is the one whose soul is in danger. She’s been put through so much in Season Three, and nothing is testing her more than her decisions regarding her father. So when she gives Malcolm up to the League, Oliver is willing to do the unthinkable; go to Nanda Parbat and rescue him. Why? Because he’s only sure of one thing: Saving Thea’s soul from the darkness, from the guilt, of being responsible for her parent’s death. Oliver knows first hand what that is like, and he refuses to let his sister suffer the same thing.

But in being so relentlessly determined to save Thea, Oliver hurts everyone else around him. He easily lies to Laurel, rejects Felicity’s love, and sacrifices almost everything that makes him Oliver Queen in the process (just to name a few). But to Oliver, that’s all worth it. He has pushed his selflessness to the brink, and he’s reached a point where nothing else matters.

And he was worried Laurel’s feelings would cause her to act recklessly… Oh, Oliver. 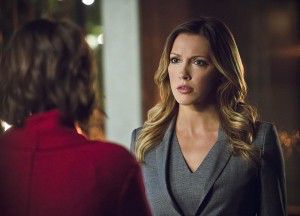 Is there no end to the secrets? Of course not, you’re a Queen. Your secrets are your fortune.

Despite her brother’s efforts to save her soul, Thea (Queen of Secret Spilling) is still struggling tremendously. She can’t figure out how to live with Sara’s death weighing on her, how to live around the people who loved Sara. That’s why she revealed her secret to both Laurel and Roy. She would rather face their anger than be buried under her guilt. When Thea faced Laurel, she doesn’t blame her for Sara’s death. But she does give her a dose of reality: despite not being able to control herself before, Thea’s choices, going forward, are entirely her responsibility.

Then, when she reveals the truth to Roy, he spend the episode trying to help her deal with her guilt, something he knows intimately well from when he killed a cop while under the influence of Mirakuru. Parallels in character and storyline are a strong feature of Arrow, and having Thea and Roy share their grief was an excellent plot development. But in sharing her secret to both Laurel and Roy, Thea gained a new perspective. She is responsible not just for her choices, but for the repercussions of those choices. Namely, turning Malcolm over to the League and Oliver running off to keep Thea’s decision from ruining her life/soul. And that, I think, is what leads her to confess to Nyssa. She needed to face justice, and Nyssa is that justice. 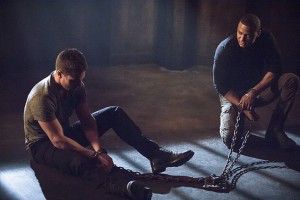 Speaking of Nyssa, she was incredible in this episode. Her reappearance in Starling, her Zen attitude while caged in the Arrow cave, and her emotional scene with Laurel discussing Sara’s laugh were all executed brilliantly. Plus, Nyssa’s moment with Thea, when everything was laid bare, had me immediately itching to see the next episode. I want to know how she reacts to Thea’s revelation.

Another character who really shone in this episode was Diggle. He was the Digg we all know and love: steadfast, supportive, and understanding. He, above everyone else, understands why Oliver is doing all of this. Diggle knows Oliver like a brother, and he chooses to stand beside him even in the most unthinkable of situations. He is Oliver’s partner, even when he hates certain parts of Oliver’s plan. But as a soldier, he knows that ugly things have to be done to win. But that doesn’t mean he can keep things real. He refuses to hide his open hatred of Malcolm and calls Oliver on his motivations, pointing out (correctly) that Oliver isn’t just facing Ra’s for Thea’s sake.

Then, in their prison cell when the future is at its most uncertain, Digg and Oliver share a tender moment that was rich in emotion. Digg’s speech about losing one brother and gaining another was touching, as was his request that Oliver be his best man. You know, assuming they don’t die. It made me (and probably you) love Digg even more.

And as the delicious cherry on top, Digg delivered that wicked burn to Malcolm. “My friends call me Digg. You shouldn’t even speak to me.” Ooh, burn! 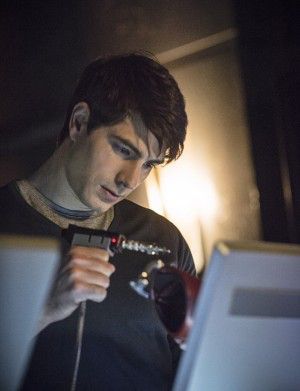 I did more than just burn myself. I almost blew myself up!

Now we move on to a big source of turmoil within the fandom: Ray and Felicity (AKA Raylicity to the shippers). Ray Palmer is back and exhausting himself over finishing the ATOM suit. Felicity, caring as she is, basically forces Ray to take a break by blackmailing him changing his system’s password. Ray finally agrees, and then, in the heat of the moment, he and Felicity kiss. Which then leads to them sleeping together.

These two have been dancing around each other for a while. There’s obviously attraction, but both had been resisted acting on it because of their love for someone else. But this episode became a tipping point for both of them. Felicity has been through so much, dealt with unbearable loss and pain over her love of Oliver. So can you blame her for craving the attention of someone who truly cares about her and is willing to show it? I can’t. Oliver’s off to face death, again, and doesn’t depend on her judgment anymore. But Ray does. He flat out tells her that he depends on and values her, and in that moment, Ray is basically offering her everything that Oliver won’t. So she kisses him. And they both realized they can seek comfort in one another.

However, that doesn’t necessarily mean it’s anything lasting. Heck, we already got a suggestion that it won’t be much more than a temporary romance when Ray left Felicity in bed to go suit up and fly around the city. By the way, did anyone else think Ray looked like an Iron Man knock-off as he zipped around on his jets? The least he could have done was have a rocky take off. It was his first time and all. Even Tony Stark had some wobbly test drives when he first flew his suit. Ahem. Moving on. 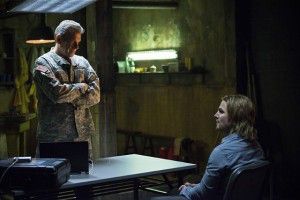 It wouldn’t be a Season Three episode without another flashback, and this time we saw Oliver’s debrief with the general and a shining moment where Oliver actually believed that he was going home—until Waller mucked everything up again. What we assume are Waller’s men (or are they the general’s?) attack Oliver, Maseo, Tatsu, and their son Akio right before they all board a boat to freedom. As soon as I saw Akio I couldn’t help thinking this would be the episode he’d die. Instead, Oliver hauls the boy to safety while his parents are under heavy fire. Though the episode didn’t reveal anything beyond that, I still have a strong suspicion that Akio is going to die.

At the very end of the episode, the season-long arc of identity comes to a new crescendo: Instead of killing Oliver, Ra’s al Ghul reveals that he wants Oliver to be his heir. Now Oliver is faced with a crucial choice that will decide his identity. Is he a hero? A killer? A man or a symbol of power? I have to make an amendment to my review of “The Return.” I claimed that Slade, in some ways, was more of a threat to Oliver (physically and emotionally) than Ra’s. But with this episode, I think otherwise. Ra’s is making Oliver face something much more dangerous and tempting than anything Slade did. If he accept the offer and gives up what’s left of Oliver Queen, he’ll become an even greater symbol of power than the Arrow. With Oliver’s current mindset, that’s the kind of identity he thinks he needs. But at what cost? One other thing seems quite certain: whatever Oliver chooses, it will alter his path forever.

So what’s the verdict? I give this episode 9 out of 10. Another great episode full of emotions and secrets. Plus, we had the big twist with Ra’s wanting Oliver to be his heir rather than his next victim. Clearly, Oliver has proven his worth to Ra’s, and it does seem like the next logical step in the season-long arc of Oliver’s identity crisis. However, I had to detract a point for a couple of things. One, there was Oliver’s ulterior motive of wanting to face Ra’s just so he could face the man that beat him. I get that, to a point, but for all the supposedly selfless things Oliver’s been doing lately, being egotistical just doesn’t match up. And two, Ray’s silly Iron Man stint. But overall, I thought it was another great episode.

What did you think of “Nanda Parbat?” Share your thoughts in the comments!