“Doctor Who: Last Christmas” – Blu-ray and DVD Comes down the Chimney February 17 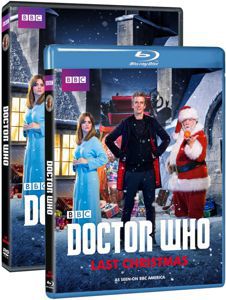 Well, this is a case of Christmas come early.  Doctor Who: Last Christmas will be hitting the streets on Blu-ray and DVD this Tuesday, February 17, which is less than two months after the broadcast premiere.

The single-disk release will contain the Christmas Special, the only episode to feature the real(?) Santa Clause, along with a spate of extras.  There will be audio commentary from Director Paul Wilmhurst and Producer Paul Frift along with a a ten minute behind-the-scenes “making of” featurette that includes interviews with the cast of the episode..

Check out this BBC America press release for all the juicy details.

In the annual Christmas special, the Doctor and Clara (Jenna Coleman) face their last Christmas trapped on an arctic base, under attack from terrifying creatures. Who are you going to call? Santa Claus!

Lead writer and executive producer Steven Moffat commented on the special: “Well obviously as everyone knows from the end of Death in Heaven (season finale), it’s the ultimate meeting of Christmas heroes; Santa Claus meets Doctor Who.  The buddy movie you’ve always wanted.  In addition to that, it’s quite surprising – it won’t be what some people expect because it’s a thriller of an episode. The Christmas element is covered in the fairly notable form of Santa Claus and the elves and their sleigh.  But the rest of it is very much Doctor Who – scary, in a polar ice cap base, scientists under threat.  I keep describing it as Miracle on 34th Street meets Alien.”

Peter Capaldi added: “It’s both really scary and really festive.  It manages to be quite frightening and still have Santa Claus in it.  It is extremely Christmassy but there is a plot line in it that is quite dark and I think Steven (Moffat) has done a brilliant job at balancing those two things.” The episode premiered on BBC AMERICA on December 25, 2014.