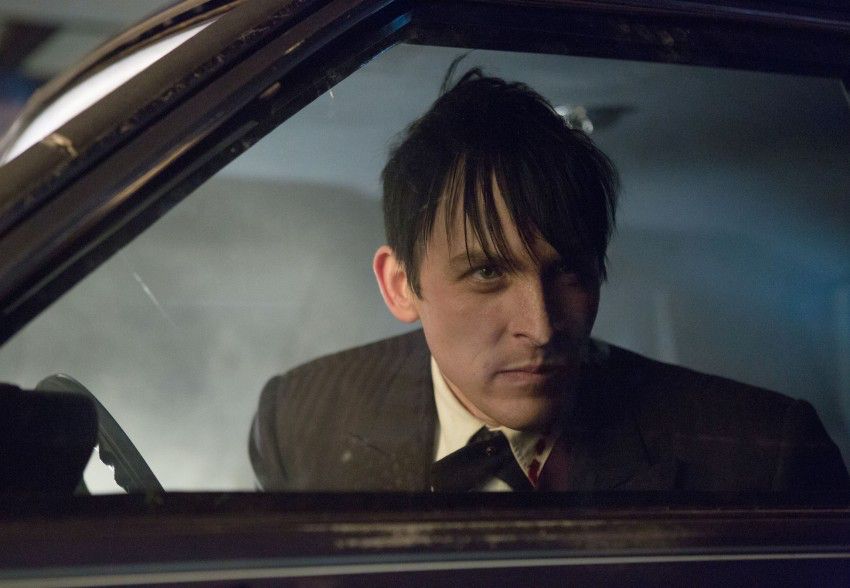 This week’s episode of Gotham focuses on two topics that affects us all: love and fear. Given that the episode’s title is “The Fearsome Dr. Crane,” it’s pretty much expected to be connected to the Batman villain Scarecrow. We’re immediately introduced to Dr. Crane, who leaps onto the scene with a rather horrifying murder: Taking a man who is afraid of heights up to a high rooftop, hoisting him over the edge strapped to an armchair, and letting him hand by the neck until dead. He does this all with near-clinical care, measuring his heart rate and otherwise evaluating his victim. 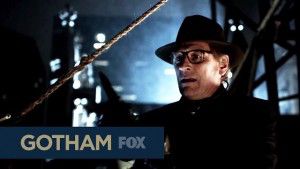 When the GCPD takes up the case, Gordon and Bullock are, of course, at the center of it. Bullock takes a particular interest in the case when the victim’s contact, Scottie Mullen, catches his eye (in the romantic sense). He’s all gung-ho to catch the killer—assuming it isn’t Mullen—and then take the little lady out on a date.

And while we’re on the subject, I think it’s important to note that love is in the air all over Gotham. Gordon is still smitten with Dr. Leslie Thompkins, and takes her out on a (albeit awkward) date. Then there’s Ed Nygma who’s still on the slowburner of love with Kristen Kringle. Between these three men, we have more than enough heart eyes going around.

But let’s switch to fear for now, specifically as it relates to Penguin, Fish, and Maroni. Fish is very much alive and still causing trouble for Penguin. She calls up Maroni to tell him the truth: that Penguin has been playing him for a chump. So what does Maroni do to get to the bottom of everything? He whisks Penguin away for a road trip. But their trip up north is about much more than fresh air, oatmeal, and good friends. What starts as a friendly chat quickly spins into thinly veiled accusations as Maroni brings up the things about Penguin’s past actions and associations (things that really bug Maroni).

The scenes between Maroni and Penguin were very well done. They had excellent acting, excellent tension, and excellent escalation of events. I particularly liked the secret-sharing game they played, which led to Maroni being sure of Penguin’s deception, and trying to get him killed in a car crusher. 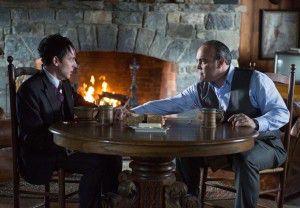 True to his slippery form, Penguin manages to barely avoid a crushing end by (what else?) talking his way out. Clever Mr. Cobblepot doesn’t need muscle when he can name drop and convince the machinery operator to let him go. This wrapped up Penguin’s association with Maroni, and I think it was handled well. It was entertaining to not only have Penguin convincingly and narrowly escape his death, but also to have him wake up to “holy salvation” in the form of a bus full of religious women who will help get him back to Gotham.

Back with the GCPD, Gordon and Bullock have their hands full with the Crane case. Following a thin lead, they find another victim but this time to save the pig-fearing man and catch the perp. Bullock is ready to do a victory dance, but Gordon remains skeptical. Ever the voice of caution, Captain Essen warns both Gordon and Bullock that Flass’s arrest has made them enemies within the force. So Gordon turns to love instead of hate: he asks for Dr. Tompkin’s help. 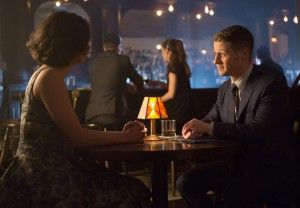 After some of her own investigating,Leslie tells Gordon that Dr. Crane was digging out his victims’ adrenal gland, which is responsible for producing fear. Since Crane removes the gland at the moment when his victim is most fearful, he could harvest high levels of cortisol. Also, since his teenage son’s name is Jonathon (future Scarecrow), it can be assumed that the cortisol will eventually be used to create the fear serum that Scarecrow uses during his own reign of terror.

Driving the episode to its climax is the abduction of Miss Mullen and Bullock’s heroic effort to save her. Gordon may not have caught Crane (his escape ensures a second episode!), but both he and Bullock get some satisfaction in knowing their ladies are safe. Plus, Gordon gets another date and kiss from Tompkins, even if it is in front of his coworkers.

To a much smaller degree, we get a bit more development on Selina Kyle and Bruce Wayne. But it’s hardly for fun. Selina, who has been squatting at Gordon/Barbara’s place for a while now, breaks the news to Gordon that she didn’t see the Wayne killer, and then slips away from him. Strike one, Jim. And when Gordon goes to talk with Bruce, he gets the boot relieved from his promise to solve the Wayne case. Strike two, Jim. He’s having a tough time with the kids, isn’t he? 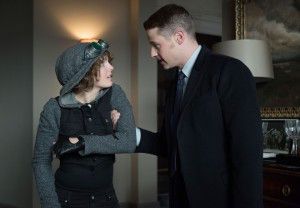 And finally, who could forget that cliffhanger at the end. Fish is out on a boat (ha!) heading out of Gotham—but she’ll be back soon enough. When the vessel is attacked, Fish is faced with someone she knows, but I certainly don’t. They lock eyes and rush each other just as the credits roll, leaving fans clamoring for more.

Verdict? I give this episode 9 out of 10. It was a solid episode with good focus on the two main story lines. It was really interesting to see the beginning of Scarecrow’s origin story, although Crane’s motivations were muddled at best. I assume that’s on purpose to make this a two-parter, but it does make him seem less formidable when he’s babbling about his fear of failure and how he tells his son that these killings are for the greater good. That being said, the plotline with Maroni and Penguin was great. I also enjoyed having Ed Nygma developed more, and this week we even caught a glimpse of his devious side when he got the medical examiner fired. And as the cherry on top, I couldn’t help but giggle a bit about Fish on a boat getting into a Mortal Combat-esque fight with the mystery man. 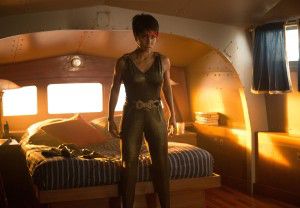