The circus is in town! This week’s Gotham episode took us to see acrobats and clowns, and much like a real circus, certain parts of the episode were entertaining while others were absurd.

Jim Gordon and Leslie “Lee” Thompkins spend a night out at the circus, but it quickly escalates into an all-out brawl between two rival carney families (the Graysons and the Lloyds). Gordon has to intervene, and in doing so he gets involved in some circus secrets. The most serious of all? Murder. Lila, the snake dancer and mother of Jerome, the boy we’re led to believe is the young Joker, goes missing and is then found dead.

To kick off this review, let’s start with something absurd: Jim using the snake like a hound dog to track down Lila’s body. I’m not disputing his claim that snakes have an exceptional sense of smell, but come on. It’s a silly idea, for starters, and there was no guarantee that the snake would go straight to its lady master’s body. 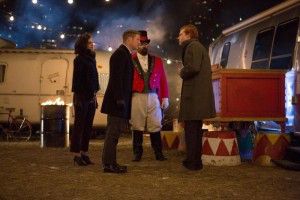 On the flip side, something I thought was very entertaining was Jerome as played by Cameron Monaghan. He did a great job on this introduction to a new villain, especially his dramatic switch from mild-mannered circus boy to mother-hating murderer. That scene in the interrogation room between Gordon, Jerome, and Cicero was tense and emotional in all the right ways. Plus, you gotta love his Joker laugh.

However, his origin story as a carney with Mommy issues is lame. It makes sense that he would be unstable due to his upbringing, but this so early on in the Joker’s storyline that it doesn’t pack a punch. It falls flat. There are still years to go before he becomes the Joker as we know him in the comics and movies, and yet in this episode he already is the Joker. So, he’s just going to coast on his murdering ways and split personality for the intervening years?

I do hope the show brings Jerome back in upcoming episodes (possibly to break out of prison and start causing havoc in the city). He isa great character, even if I was hoping for more complexity to his background.

Turning our attention to Cicero, the blind fortuneteller, I do have to wonder about the boy at his side that acted like a seeing-eye dog. Is there more to him than the show is letting on? And while it was fun to see Jim and Lee working together to solve it, why didn’t they go to Ed Nygma for help with Cicero’s riddle? He’s always speaking in riddles. Plus, I could do with more Nygma on my TV screen. 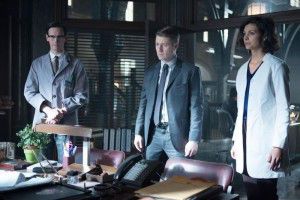 While the circus drama was unfolding, Jim and Lee experienced some drama of their own. As you’d expect from a stubborn, down-to-earth cop, Gordon has no tolerance for paranormal messages or other metaphysical possibilities. Lee, perhaps a bit unreasonably, gets really upset about Jim shutting down the possibility of the fortuneteller receiving messages from Lila. But despite their arguments, they do end up sharing a nice date and a nice night (Bullock: “You got laid, didn’t you?”). I think Jim and Lee make a good couple and have more on-screen chemistry than Jim and Barbara ever did.

Speaking of Barbara (and something absurd), we get her back this episode. She shows up at her apartment to find Selina and Ivy still squatting there. Instead of kicking them out/calling the police, Barbara becomes their new “gal pal.” That seems pretty absurd, even if she was probably drunk.She then lets them hang around Selina even offers advice on what outfit she should wear to go see Jim.

In the end, it didn’t matter since she walked in to see Jim and Lee kissing, and that was enough to make her turn tail and storm away in a huff. I really can’t feel sympathy for her at this point, though. But what I can hope for is that she becomes a bit more villainous. Maybe she’ll try to sabotage Jim and Lee’s relationship. 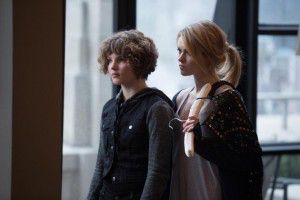 Now we move away from the circus storyline and swing by Oswald’s for a little Penguin update. His new club is doing abysmally, and it’s had an unsavory side effect: turning Penguin into a pathetic version of his former self. He’s still a great character, don’t get me wrong, but he’s not as sinister. He’s almost a pushover now, and has to resort to help from Victor Zsasz and his now-brainwashed puppet, Butch. Though I have to admit, watching Butch dance was (sickeningly) entertaining.

And then there’s Fish Mooney. She’s still in the underground prison/illegal organ farm, but now she’s rallied her new people into a “family.” She’s frank with them, but in a very persuasive way. She gets them to risk their lives for her and help her gain an audience with the facility’s “manager.” But it’s absurd to think that many of these prisoners would be willing to die for Fish after having her as their leader for such a short time. I am intrigued by the “manager” Fish is about to meet, but beyond that, I don’t have much investment in Fish’s current exploits.

Bruce didn’t get as much screen time this episode, but he did move his storyline along considerably with his decision to meet with the board of Wayne Enterprises. He ignores Alfred’s advice and announces his suspicions. The board all but scoffs at him, but Bruce’s retaliating threat is not subtle. It’s fun to see how much Bruce has changed since the pilot and how much conviction he has to solving not just the mystery of his parents’ murders, but also to making sure his family’s company stays on the right path. Who knows, he may be ready to take over Wayne Enterprises before he even goes into puberty. 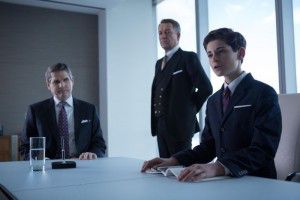 What’s the verdict? I give this episode 7 out of 10. It was okay. The mystery around Lila’s death, the feuding families finally coming to peace (not to mention the nod to Robin’s parents), and the Joker’s introduction were all decent elements to bring the episode together. But nothing about it was really stand out material. Even the side plot with Penguin and Fish was just so so. Most of the episode felt lukewarm, especially considering all the back and forth between entertaining and absurd.

While it’s enjoyable to meet the young versions of so many familiar Batman villains, it’s hard really appreciate them because oftentimes they only get one (maybe two) episodes of focus. Perhaps that will change as time goes on, but Gotham’s first season is bogged down by too many characters and too rushed origin stories.