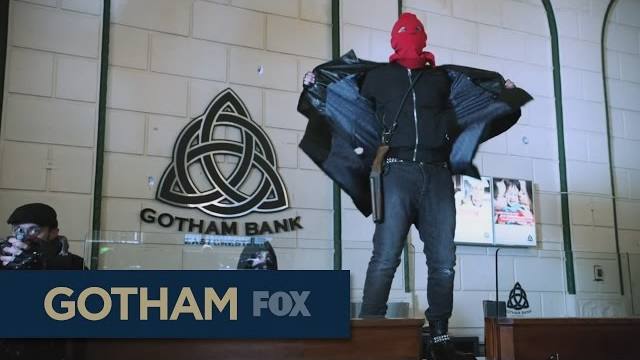 After last week’s comparatively tame episode, “Red Hood” pulled out some pretty shocking and intense scenes. These particular scenes were counterbalanced with a somewhat silly concept of a “cursed” red hood that brought the wearer bad luck. After a standard bank robbery turned into a Robin Hood situation–thanks to a random gang member who put on a distinctive red hood–the robbers earn themselves a fun new nickname and a pair of highly interested detectives: Gordon and Bullock.

Since Gotham has been so focused on the origins of well-known Batman villains in past weeks, “Red Hood” was like a breath of fresh air. It didn’t involve the introduction of any one character, but rather an on-going identity passed from person to person. The red hood then became a double-edged sword: it both gave the wearer great confidence, but also put an inevitable bulls-eye between the wearer’s eyes.

With all of the joke-like bantering this episode presented—the chucklehead who first wore the hood, the stand-up comedian at Oswald’s, and so on—it was almost difficult to not see this episode as being connected to the Joker origin story. Also, and this is purely speculation, the kid at the end of the episode (the one who picked up the red hood and managed to be both funny and creepy at the same time) seemed to be more than just a throwaway extra. 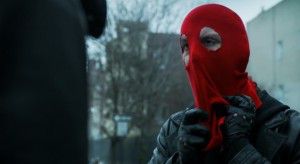 Gordon and Bullock take up the case, chasing down the Red Hood gang as best they can, but are met with one very frustrating detail—how are they supposed to get the public on their side when the Red Hood keeps tossing money to bystanders like a Robin Hood knock-off? Bullock spends the majority of his time on screen acting the hardened cop who has seen too many dead bodies to be phased anymore. Gordon, on the other hand, seemed more subdued than usual. His only really intense moment of the episode was when he comforted a distraught Bruce.

And why was Bruce so upset? Because poor Alfred needs some better friends. Reginald Payne, who was in Special Air Service alongside Alfred many years ago, pays a visit to the Wayne manor. It starts harmless enough with some story swapping, teaching Bruce some unconventional fighting methods, and so on. But then came the stabbing under the guise of stealing from the Wayne family. But, as it turns out, old Reggie was a mole for Wayne Enterprises.

This Alfred/Bruce/Reggie plot-line was very well done. It served to both highlight Alfred’s past and reveal some of his motivation for raising Bruce to be a good man. Reggie is a painful reminder of Alfred’s past, dragging up the horrible memories of those they killed while in the army. Alfred, no doubt, wants to banish that part of himself (the part Reggie represents) and be a better man, mostly for Bruce’s sake. Every scene between these three was dramatic, touching, and full of surprises. Plus, it all culminated into a tear-jerking scene of Bruce and Gordon standing in Alfred’s hospital room. Bruce can’t imagine losing Alfred because he’s all Bruce has left that could possibly be considered family. Now, I think it’s highly unlikely that they’ll kill Alfred, but it was all riveting to watch nonetheless. 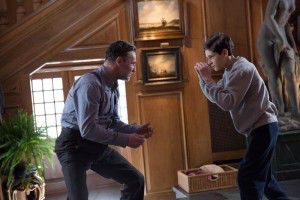 Moving on, let’s talk about Fish Mooney and the “Spare Parts Prison.” Fish goes to meet the so-called manager and comes face-to-face with Dr. Dulmacher. But before they start any negotiations, Fish is given the opportunity to freshen up with a shower. No doubt it’s a ploy to make her more agreeable for their talk, but Fish isn’t falling for that. So, they decide to just take her eyes and send her back to the prison. Not to be taken advantage of, Fish takes the job out of their hands by carving out her own eye with a spoon. WHAT? WHOA GIRL. I did not see that coming.

Now that seemed like little more than a desperate move by Fish to not let her captors get the best of her, but this is Fish Mooney. She’s always scheming, always trying to stay one step ahead. But other than the gasp factor, I don’t see what else that move was supposed to accomplish. It was shocking, intense, and played out like a train wreck you can’t look away from. On top of that, Fish doesn’t seem to have any leverage now that she’s away from her so called “family” of other prisoners. So was there really any other way for that to play out except badly for Fish? I’ll say one thing for her, though. She knows how to make a scene. 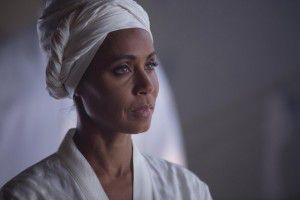 And, since we can’t seem to have one without the other, let’s switch from Fish to Penguin. Things over at Oswald’s are no better this week than they were last week. The stand up show is an abysmal failure and Penguin can’t even keep his bar stocked with liquor. Butch is there too, but now he’s acting a lot more “normal” than he should be after Victor Zsasz’s re-programming. He acts chummy toward Penguin, but manages to make Oswald look like a fool in the process. Penguin should be ordering him around more (he seemed delighted by the prospect last week), but instead he just listens to Bruce, contemplating his words like he might a friend giving him advice. All I can say about that is, “Huh?”

To round out the episode, we get a little peek at how Barbara and her new roommates are doing. Barbara is supplying Ivy and Selina with all sorts of clothes and girl talk, which I assume is because she’s lonely and heartbroken after seeing Gordon with his new girl. Their bonding time starts deceptively smoothly–until Barbara tells young Cat that a dress can be as powerful a weapon as a gun.

Now, we know Barbara has used her feminine wiles before. But she’s telling a 13-ish year old girl to start seducing men with skimpy clothing. Kind of inappropriate, isn’t it? But never fear, Cat puts Barbara in her place, effectively taking out her verbal claws to remind Barbara that she hasn’t been successful in her own tactics lately. It was fun, in a sort of uncomfortable way, to see these two characters push at each other. They aren’t friends, but they aren’t enemies, either. I’m very curious to see their dynamics develop further. 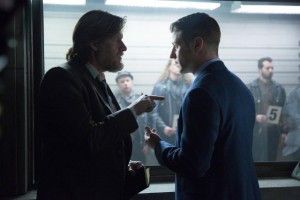 So what’s the verdict? I give this episode 8 out of 10. I think the plotlines involving the Red Hood gang and Alfred/Bruce/Reggie were very well done. But Fish and Penguin’s storylines are still floundering more than I’d like. They’re great characters, but their storylines seem to have made a few missteps in recent episodes. Although, I have to give credit to Gotham for throwing in two great shocks: Fish scooping out her own eye and Alfred getting stabbed by an old friend turned mole.

What did you think of the episode? Share your thoughts in the comments.