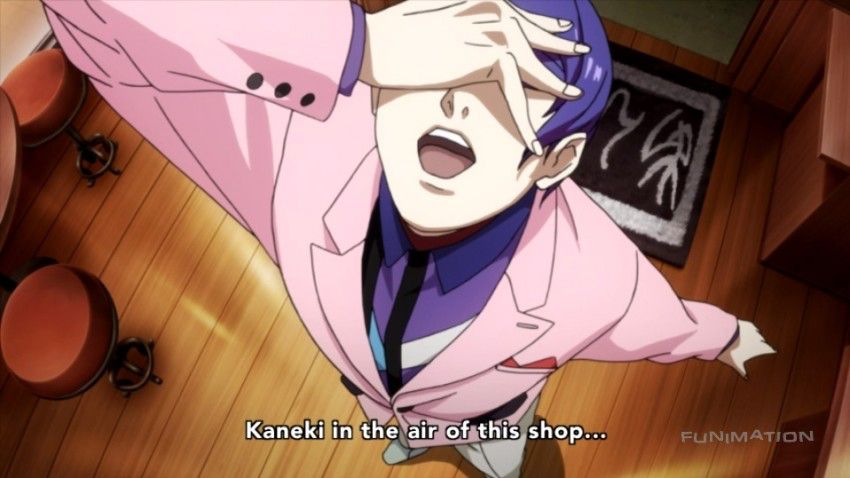 The seventh episode of Tokyo Ghoul Root A tries to focus more on Tsukiyama and Anteiku. In addition, we were finally able to see more of Kaneki on the screen. We get to see how the madness takes over his mind and his body. After Jason and Shachi humiliate Kaneki, he can no longer keep his inner demons under control. His inner demons seem to be personified by Jason and Rize. He has unwittingly let his hunger for power get in the way of the humanity he tried so hard to keep at the beginning of the show. Even though his cannibalism made him more powerful, it seems as if that very power will eat him alive.

Hinami is a young girl who is extremely mature for her age. After Kaneki left, Hinami knew that Touka and her other loved ones at Anteiku were having a hard time dealing with his absence. Because of this Hinami has decided to do her best to make things easier for everyone. She knows that her friends are suffering. Despite her efforts, she eventually realizes that there isn’t much she can do to help Kaneki and Touka.

Even Tsukiyama is worried about Anteiku and Kaneki, despite his strange obsession. He even goes out of his way to show Hinami the same coffee shop he visited with Kaneki. It seems that parts of him care about Kaneki more than we initially believed. Even though he wants to eat Kaneki, he still considers him as a friend. He keeps a close eye on Kaneki in order to ensure that he is still alive. He also reports his findings back to Anteiku. I have really enjoyed the way Tsukiyama’s character is depicted in the show. He is so obsessed with Kaneki’s scent and “taste” that he spends much of his time in the bathroom. This seems to be the only place where he is able to enjoy the scent of that bloody handkerchief that he keeps stashed in a sealed bag freely.

While Hinami is at the coffee shop with Tsukiyama she runs into Takatsuki. Hinami talks to her about the problems that she is currently experiencing. We get to learn more about what is driving Kaneki through this conversation between Takatsuki and Hinami. Although Takatsuki has never met Kaneki, she seems to know quite a bit about the way he thinks.

Kaneki has never had the experience of being in a loving family. His mother worked herself into an early grave in order to please the people around her. Kaneki was never able to fit in with anyone. Despite his loneliness, he did his best to put on a brave and smiling face. We can see that he is a lot like his mother. He never really puts his on well-being first.

Takatsuki heads to the CCG office after she leaves the coffee shop. We know that she is a big part of the story be we still are not sure how this is so. However, it is safe to assume that she is not a ghoul. She was able to walk right through the gate that is designed to detect ghouls. She never set off any alarms. While she is at the CCG office, she somehow lands an interview with Shinohara and Juuzou. I thought it was a little strange that Juuzou seemed so bothered by Takatsuki’s presence. What is it about her that bothers Juuzou? Does he recognize her from somewhere? Do famous people bother him? Tokyo Ghoul: Permeation uses this interview to reveal to us that Takatsuki is not as airheaded as she seems. Her questions continually hinted towards Kaneki and the eye patch ghoul. In addition, she provided information that hinted towards the location of Anteiku. She has ulterior motives; that much is apparent. How is she connected to Anteiku or Kaneki?

Kaneki does finally go back to Anteiku. However, it wasn’t for good this time. He had a conversation with Yoshimura that we were not able to hear. It is possible that it will be revealed in the next episode. After he has spoken with Yoshimura and heads back to his own place, he runs into Touka. This confrontation between Touka and Kaneki is my favorite part of Tokyo Ghoul Root A: Permeation. We were able to see how much Touka missed Kaneki. We also saw her reaction to how much Kaneki has changed. Kaneki was shocked to hear Touka tell him not to come back to Anteiku. He does not want to be alone. Because of this, he does not know which path is the right one to take. Of course, we know that Touka did not mean what she said to him. She was just extremely upset and regrets it later after she has gone home.

At the end of the episode, Shinohara visits the Anteiku coffee shop. He later tells Juuzou that they will be continuing their investigation there. Does this mean that there will be a raid in the future? If that is the case, it might not be possible for Kaneki to return to Anteiku. I am not sure why he spoke to Yoshimura. In the manga, we were able to see the reason clearly. The Tokyo Ghoul show does not focus on some of the minor details.