CHAPPiE is a film that is directed by Neil Blomkamp and is actually based on a short film he created, titled Tetra Vaal. CHAPPiE stars Yolandi Visser and Watkin Judor Jones from the South African rap group Die Antwoord. However, there is a cast full of well-known celebrities in this film. This includes Hugh Jackman, Sigourney Weaver, and Jose Pablo Contillo. Sharlto Copley voices the loveable CHAPPiE.

Since the scouts have become so popular, Deon Wilson becomes popular and celebrated as the designer of the robots. Unfortunately, this attracts the attention of coworker Vincent Moore. Vincent is another designer with his own aspirations that seem to be falling apart around him. The funding for his project titled MOOSE has been cut and he is having a hard time trying to get his own robot design noticed. He blames his losses on the success of Deon’s scouts and becomes a little obsessed with what Deon is doing. 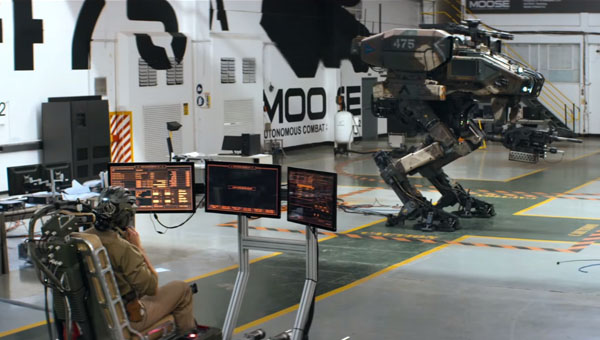 Meanwhile, Deon is oblivious to everything that is going on around him. He has finally made a breakthrough on his current project: artificial intelligence with the ability to learn from humans. This means he is now able to create a robot with feelings and opinions. He runs to his boss in his excitement with the intention of running a test of his new program on an unused robot. Unfortunately, he is working for the wrong company. Tetravaal is a manufacturer of weapons and militaristic robots. This means that the CEO is not in the least bit interested in providing funding for a robot with feelings.

Deon refuses to give up. He is too excited to think clearly and decides to risk his entire career in order to steal a busted robot. He loads the robot, spare parts, and a driver containing the necessary updates into his van. He plans to run his own tests. On his way home, he is attacked by a group of criminals consisting of Amerika, Yolandi, and Ninja. This group is facing an attack from one of the biggest criminals in the city unless they are able to obtain 20 million dollars. They want Deon to reprogram a scout so they have a little help while they try to do a heist. Of course, Deon isn’t willing to do this so they threaten to kill him. He eventually agrees to perform his experiment with them in order to provide them with the robot. 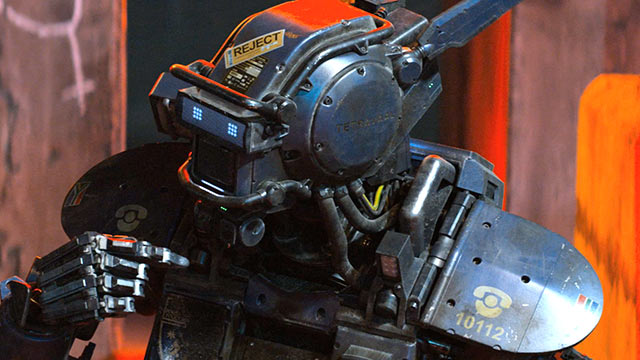 The robot awakes and is completely terrified. Everything is brand new to him. Deon and Yolandi do their best to calm him down. Of course, this is difficult to do while Ninja is acting angry and impatient. Yolandi manages to send Ninja to a separate room while they get to know the robot. They begin teaching him how to speak and Yolandi even gives him a name. CHAPPiE catches on pretty quick. He starts referring to Deon as his maker and he refers to Yolandi as his “mommy”. Despite all of the excitement and the beauty of this moment, Ninja gets agitated again and forces Deon to leave. He doesn’t want Deon teaching CHAPPiE anything. Even though I tried as hard as possible to understand Ninja’s character, I didn’t like him from the very beginning. Of course, he only has a couple of days to pay 20 million dollars to this gangster before he is attacked. I suppose that would send anyone over the edge. CHAPPiE’s battery is damaged and doesn’t have that long to live.

Ninja reminds me of the type of father figure who wants his son to become a man too soon. He does not care about the fact that CHAPPiE’s mind is still childlike. Unfortunately, CHAPPiE views him as a father figure in a way. He is easily intimidated by Ninja. Despite this fact, he trusts him completely. Ninja tricks him into going for a ride to see the real world. CHAPPiE gets an all too real introduction to the real world and the people in it when he is dropped off in a tough neighborhood. This was supposed to be a fast way to toughen him up and prepare him for the heist that Ninja has planned. This is where viewers started to connect with CHAPPiE on another level. He is like a terrified and lost child. I am even reminded of a lost puppy during his earliest scenes. He panics the minute Ninja stops in the neighborhood. He begs them to let him stay in the vehicle and tells them that he doesn’t want to get out. He continues to say he wants to go home. His voice seems extremely real during this scene and I could sense his growing panic as he is left there alone. 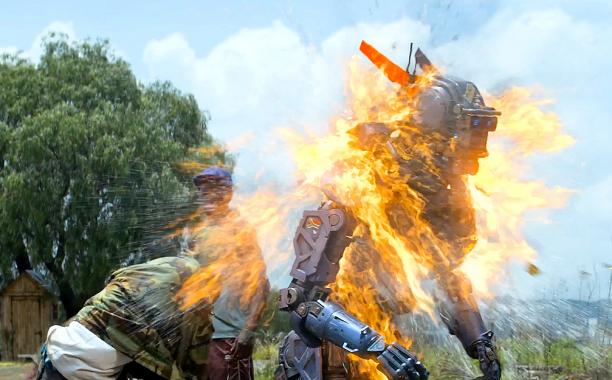 Even though he escapes the neighborhood, he does not manage to make it back home safely. Vincent has been keeping an eye on Deon’s movements and has learned about CHAPPiE. He kidnaps CHAPPiE in order to take the driver that Deon left in him. Vincent needs this driver in order to make his own moves against Deon and is willing to do anything to get it. Despite CHAPPiE’s desperate questions and pleas, Vincent cuts off CHAPPiE’s arm in order to make sure that he cannot fight back while he obtains the driver. After the driver is taken out, CHAPPiE manages to escape. He returns home extremely damaged. He is terrified, sad, confused, and hurt. He looks for comfort from his mother. Yolandi and Amerika use the spare parts that Deon stole in order to replace his arm and fix him up. Ninja sees the shape that CHAPPiE is in and begins to feel sorry about it.

This scene started CHAPPiE’s pain. It is the first time he is introduced to the evil side of humanity and it puts in motion a series of events that eventually alter the way CHAPPiE thinks and views the world around him. After this, Ninja tries as hard as he can to remain calm and patient with his robotic son. He trains CHAPPiE in various martial arts techniques with the help of Amerika. Of course, CHAPPiE refuses to handle guns. He knows that guns can kill or severely injure other people. In order to convince him to use other weapons, they tell him that doing so only puts people to sleep. 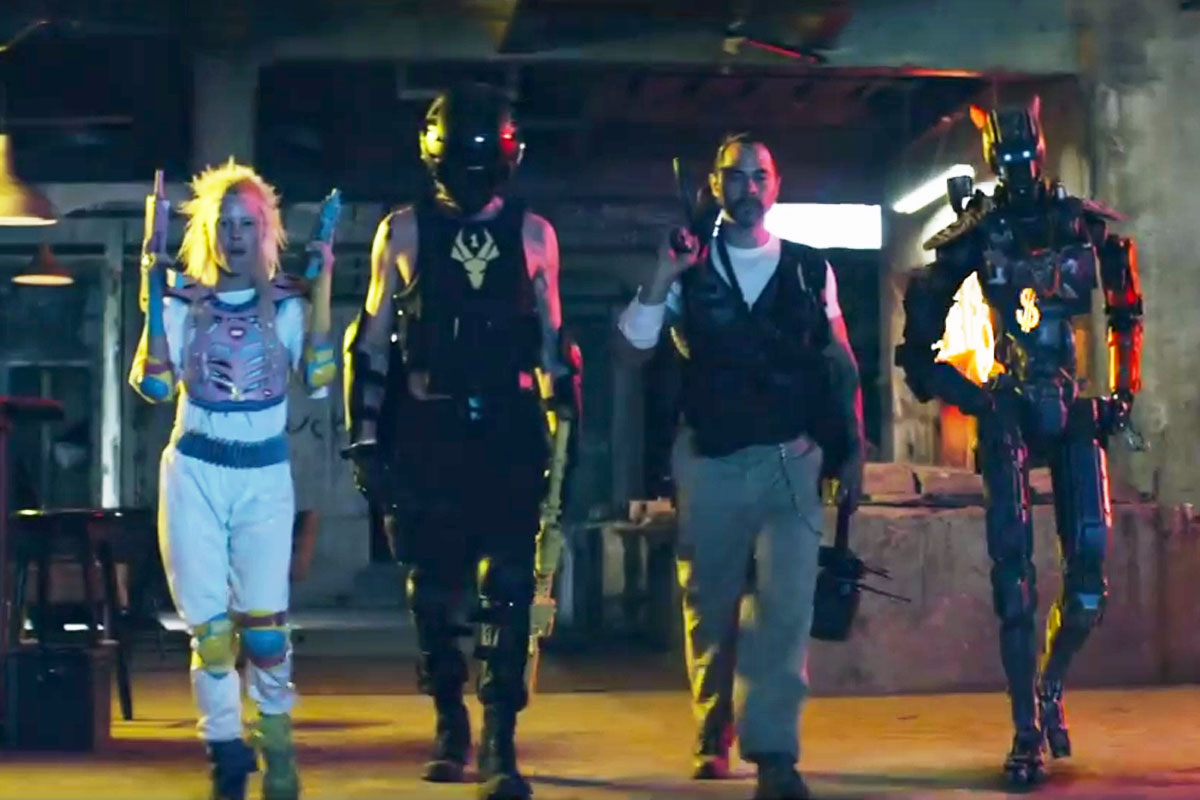 There is also a significant confrontation between Deon and CHAPPiE. Are there Christian undertones in this film? During this confrontation, CHAPPiE screams at Deon, wondering why his maker` made him just to die. CHAPPiE is clearly upset and feeling rebellious. He no longer wants anything to do with Deon. He would rather spend his time with the people who have offered him the chance to survive. During this confrontation, Vincent uses the driver he took from CHAPPiE to install new software that causes CHAPPiE and every other scout to shut down. Despite the few days of life that he has left, Deon takes CHAPPiE to Tetravaal headquarters in order to save his life and turn him back on. He even stops Vincent from deleting CHAPPiE’s software. While they are at Tetravaal headquarters, CHAPPiE finds the helmet Vincent created and learns that it might have the ability to transfer his consciousness to another robot. Deon refuses to believe that it is possible for CHAPPiE to be able to transfer his consciousness because he is a robot. Despite telling him that there isn’t anything that CHAPPiE cannot do, Deon himself has no hope. CHAPPiE seems to be the only character in this film with any real hope. Does it have something to do with his innocence? He trusts everything he is told until it fails to be true. However, this is one time that CHAPPiE refuses to believe what he has been told. He steals the helmet in order to work on his idea later.

Deon escapes as soon as the police and other members of Tetravaal find them. The two find each other and make their way back to the hideout where Ninja is waiting. He is heartbroken and burning Yolandi’s possessions. He finds a hard drive that has Yolandi’s consciousness inside. CHAPPiE has already ensured that he can save her in case something happens to her. They are eventually able to hack into the computer system of Tetravaal. They create a female robotic body with an eerie resemblance to Yolandi. They are also able to use the computer system to transfer her consciousness and all is well with the world. 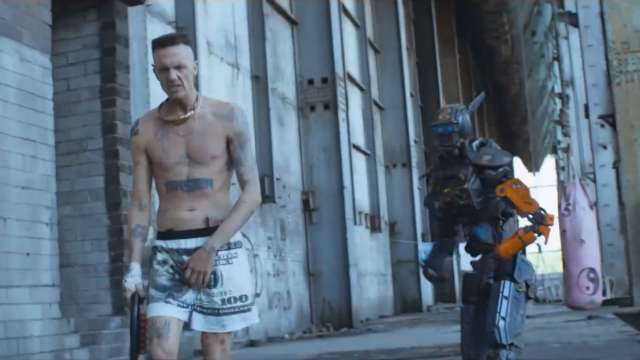 Blomkamp uses CHAPPiE to make his viewers think about the concept of artificial intelligence. However, he did not make it as terrifying as other science fiction films have done. In addition, the film explores the innocence of humans and the evil nature within all of us. There is one scene in which CHAPPiE asks the people around him why they must always lie to him. The film makes us think about why so many men and women have the need to corrupt and manipulate others.

Although he makes very valid points throughout the movie, he makes it difficult to prove his points with the cartoonish criminals in the film. Some of the guns that are used by the Die Antwoord members are even bright colors. The characteristics of the various criminals are larger than life as well. Even though this is the case, he still did a great job of making it seem interesting and it provided a bit of necessary comedy. For example, Ninja takes his time trying to teach CHAPPiE how to walk, talk, and act like a gangster in order to seem cool and tough. They even spend time providing him with the necessary bling and graffiti art. This film is a fantastic look into humanity. CHAPPiE is an extremely loveable character and Blomkamp has succeeded in making us feel sorry for him. He has the ability to feel every emotion in its purest form. As long as you can look past some of the plot holes and one-dimensional characteristics from some of the less important people, there is no doubt that CHAPPiE will be worth a watch for you.