Vincent D’Onofrio joined us on the Twitterverse for a Q&A about his upcoming role in Daredevil!

“Hello everyone! Throw some questions at me. I’m here in Mexico and ready.-Vince #AskFisk

Q: Is Vanessa making an appearance?
A: Oh, yes. She has everything to do with the Fisk origin story.

Q: You’re invested physically/emotionally in characters. (Was it) mentally draining to play Wilson Fisk?
A: Depends on (the) scene. Intense stuff (is) draining.

Q: How does it feel to be a part of Daredevil?
A: I’m in super cool company. A great feeling.

Q: What superpower would you personally like to have?
A: If we’re talking about me, to rid the Earth of evil.

Q: Is Fisk a monster? Or just a guy (who) became that way to survive?
A: That is for the people of Hell’s Kitchen to decide.

Q: What is the best part of joining the MCU so far?
A: (The) opportunity to work with the creative minds of Marvel.

Q: How do you describe your stunt double?
A: Extremely handsome.

Q: What (was it) about (the) Daredevil script that made you want (the) Fisk role?
A: How Steven DeKnight approached the characters as real people.

Q: Did you read comics as a kid, if so which?
A: I read many. But for me, Marvel was Spiderman and Captain America.

Q: How much physical prep did you do for this part?
A: Mostly interior prep, which was a heavy load.

Q: The Owl, is he an associate? A rival? A pawn? Complicated?
A: I’d love to tell you (the) whole story right now, but I can’t. 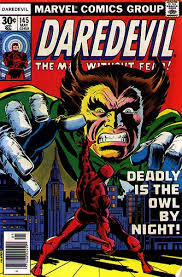 Q: What is it that Wilson Fisk admires most in Daredevil?
A: He admires his tenacity & his small size. Ha!

Q: How does Fisk compare to other villains you’ve played in films like Men In Black/The Cell?
A: All unique. Nature/Nurture.

Q: How much of (the) show will be essence of a Crime/Drama?
A: The task is balancing crime drama and action/adventure 1/2.

Q: How is it replacing Michael Clarke Duncan?
A: MCD was an awesome actor. Not taking over. Reinventing.

Q: Can you summarize Wilson Fisk in three words?
A: Child and monster.

Great questions. You’re all going to be a great audience on April 10th. Thanks again everyone! Can’t wait for you to see Daredevil! Later. V.”

Be sure to check out Daredevil beginning April 10th! The full series will be available on Netflix. Stay tuned here for all of your Daredevil and indie news!