Double trouble is definitely what we got in this episode! 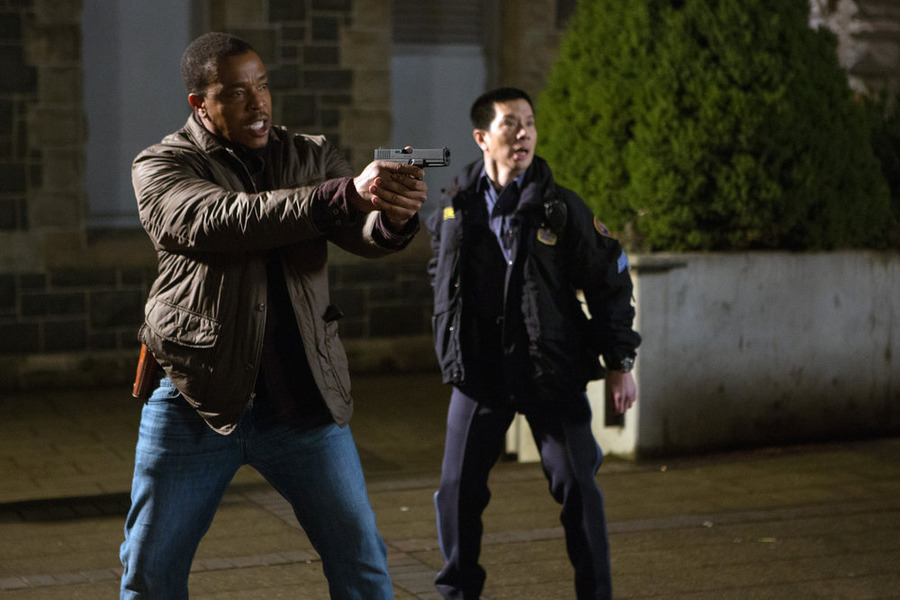 So Adalind is definitely pregnant, and apparently she forgot that she’d slept with Sean not long before she’d slept with Nick, because she was trying to figure out who to make the baby daddy. Or maybe it’s too boring for her to use the same man twice? Her comment to herself about how she can’t have another baby when she can’t even find the first one was spot on, so I suppose she gets some credit for realizing she’s not ever going to be up for Mother of the Year. I’m still unthrilled by another baby plot arc, but I’m still hoping they’ve got something really interesting coming for this one. Her brief interlude with the King made me go hmmm… a new Royal is coming to Portland and they’re shipping Viktor home. Maybe he didn’t get results fast enough to suit the King? We’ll see what happens with the new guy… and does anyone else think we should be introduced to a female Royal sometime soon? That would shake things up! 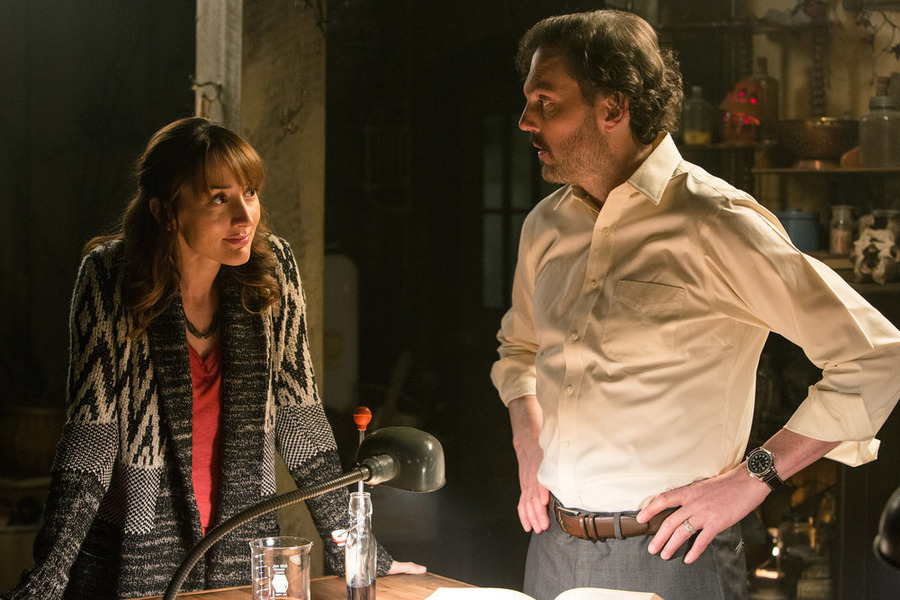 Speaking of Sean Renard, the side effects of his mother saving his life – memories/dreams/visions of his shooting and then waking up covered in blood when all the wounds are closed – are getting worse and happening more often. His human doctor can’t find any problems (who’s not shocked?), so he gets Adalind’s spell book from Monroe and Rosalee and then gets Juliette to open it, hoping he can find something in the book that will help. Why doesn’t he just call Mom?? Juliette, of course, is very interested in this book… something that seems more than a little dangerous for both her and everyone around her. I can’t blame her for wanting more knowledge, considering Sean and Henrietta weren’t much help – that Sean pointed out that a Zauberbiest is not the same as a Hexenbiest was very curious, and I wonder if we’ll see that come up again soon. This is one of the few examples of a Wesen species that manifests differently in males vs. females, and so far, we haven’t seen anything that speaks to the differences in their powers. I’ve always assumed that Sean didn’t have many powers because he’s only half-Zauberbiest, but what if all Zauberbiests are relatively weak compared to Hexenbiests?

On to other powerful Hexenbiests, Juliette has decided that she needs to move in with Sean, because he gets her. Sean thinks this is a bad idea but gives in. For some reason, when Sean asks if she’s told Nick that she’s now a Hexenbiest, she lies and says no. I’m not sure what the point of that lie is, but no doubt it’ll cause problems at some point. Juliette is refusing to return Nick’s calls, and he’s really worried about her and the situation, while she is more concerned about who she is now. This is understandable but still surprising, and really doesn’t bode well for their relationship. 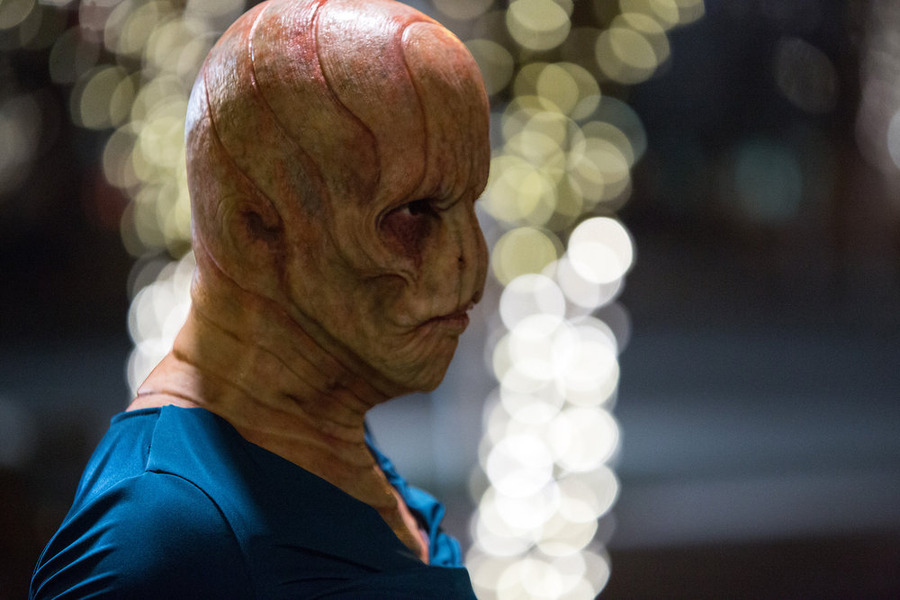 The Wesen of the week, the Huntha Lami Muuaji, is a worm-like Wesen that has acid-secreting skin when woged that can kill, but more importantly, they have a dual nature that allows them to become both a man and a woman, each with a separate personality. Stacy and Linus have the perfect con game going until they end up killing someone, which brings Nick, Hank and Wu on the case. I love that Wu is pretty much taking things in stride now. The books in the trailer don’t have all the info needed on Huntha Lami Muuaji, so they ask Monroe – and Rosalee – if he’s willing to be the next mark, which is pretty amusing overall – but it also leads them to discover the truth about Linus and Stacy. The hormone solution that Rosalee concocts leaves Linus unable to woge to the dangerous worm-like state or turn into Stacy, so they could arrest him. But considering they pretty much killed Stacy (they did this without even knowing how long it would last), it was really a shame that the only way they addressed that was with with Monroe pointing out that it’s an, “ethically ambiguous, morally grey area type situation.” It would have been better if the writers hadn’t just swept that under the rug.

Still, I can’t wait to see what happens next week – do you feel the same? 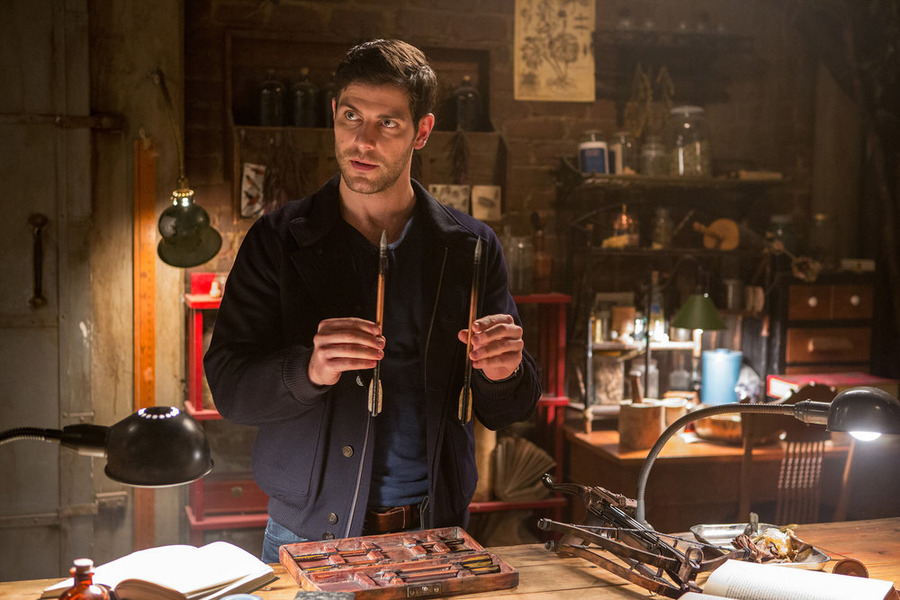