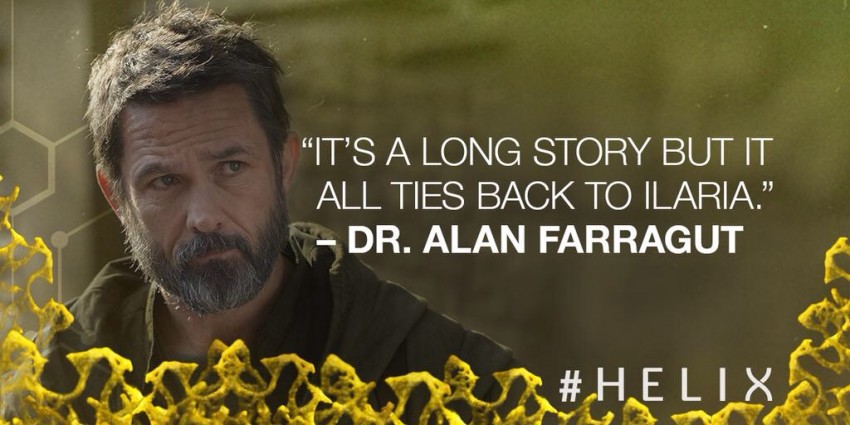 Once again we are left wondering #WhatTheHelix?! They’re keeping us on our toes!

The show starts with a Pete Seeger song called Plow Under playing over a horrific scene of everyone who has died at the Abbey. 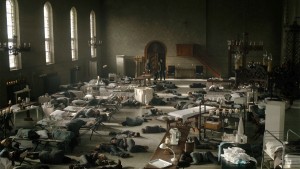 This song was written in opposition to Americans fighting in Germany during WWII, referring to the casualties of an unwanted war.  The lyrics fit the tragedy on the island of St. Germain too well.

Here’s a link to the song.

Remember when the AAA
Killed a million hogs a day?
Instead of hogs it’s men today.
Plow the fourth one under.

Words and Music by Lee Hays and Pete Seeger (1941)

This episode was under Sister Amy’s control all the way through.  Her “Machiavellian” plans are well underway. Sarah announces to Alan her belief that her baby is still alive and that she is going to find it.

Michael (Stephen Weber) returns to his botany lab to talk to Amy after his successful Jim Jones-style “thinning”.  Amy lets him know that she will join with him and bow to his will.  He takes her out of the case she has been locked in and tells her he will begin the “planting ritual”. 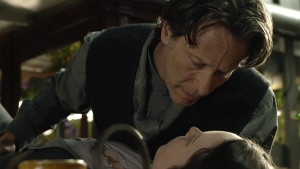 His incestuous relationship with his daughters is just beyond disturbing!  Yuck!  Landry arrives just in time with his men and stops Michael from any kind of “planting”.  Amy had a plan all along with Landry to double cross Michael.  She is so devious. Alison Lauder is doing a great job with her sarcastic, angry and manipulative actions and expressions.

Michael tells Amy, “I made you and I can end you,” taking the tongue in cheek parental saying “I brought you into this world, and I can take you out” to a whole new level by actually doing it!  Amy is not impressed and tells him that she will “enjoy not having to hear you chirping in my ear”.  He reminds her that he will live forever, she’s counting on it. She’s definitely up to something.

When we see them again, Michael is down in the oubliette saying “I’ve killed thousands of my children and I will make thousands more and I will kill them too”.  I can imagine that it could be easy for an immortal to lose track of reality after hundreds of years.  Amy is not concerned, she’s not planning to kill him!  I love her expressions whenever she talks with him.

Her goons appear and they build a “monument” to Michael over the opening of the oubliette. 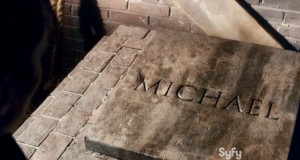 While all this happens, the CDC doctors are having their own dramas. The worst is the discovery of all the dead people in the dining hall.  I’ve seen a few comments by the actors saying that when they read the script, they were shocked that the show was actually going to “go there” in the story.

Lt. Commander Winger of the Coast Guard arrives with her troops in full riot gear.  She announces that the island is under quarantine and they all have to leave immediately. The pathogen seems to have spread to another island; the CDC doctors guess that the bees took it to the other island.  The idea that quarantining the island to contain the pathogen is completely inaccurate. This is proven by the fact that it has spread to another island.  Poor Lt. Commander Winger, she cannot think for herself, she seems to only be able to repeat her orders.  Am I the only one who wants to shake her?

Anne does not want to leave the island – it’s her home and she wants to honor the dead. Peter follows wanting to help her. It looks like there’s a possible relationship between these two after they bonded in the pit.  Will we see more of them together? 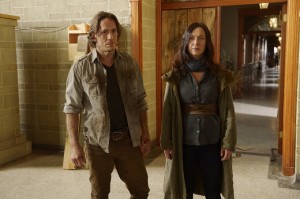 The CDC docs want to continue their research; they are so close to some answers that leaving now would be a mistake.  Kyle and Sarah head back to the lab to get some work done.  Kyle shows Sarah the book he found while in the balcony. 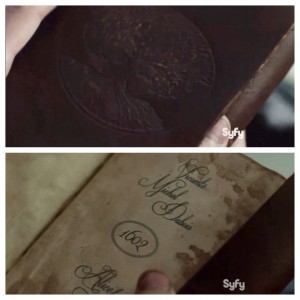 It’s a genealogy going back hundreds of years to the 1600s.  Michel Dubois is listed as the father on every single page.  Sarah tells Kyle that this is Michael.  I find it surprising that Kyle was not aware of the immortals, but apparently he wasn’t. He soon learns that Ilaria is also run by the immortals. I’ve heard that we will have access to the entire genealogy by the 12th or 13th episodes.

A potential cure is discovered after an autopsy of one of the infected dead people from outside the Abbey.

Im Michael’s office, Amy is rearranging furniture and she has added a picture of Michael to the portrait wall, where all the dead wives are placed. 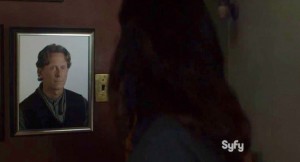 Sarah finds Amy and demands to know what was done to her.  Amy tells her they did not abort her baby, they induced labor!!!  What??!!  The episode ends with Amy opening up a cabinet and showing Sarah her baby in an incubator.  She tells her she can have the baby back if Sarah gives her immortality!!

The “immortaletus” turns its head, opens its eyes and looks at Sarah, with SILVER EYES!! 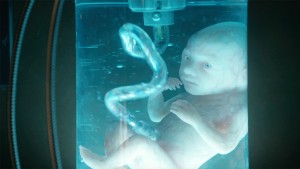 During the last few episodes we have not jumped forward in time. In this episode we again go ahead to see what Julia is up to in the future. 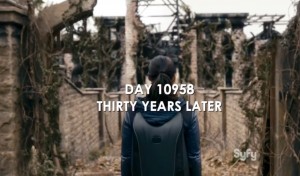 She is at the burned skeleton of the Abbey, holding the pendant from Mlle Dumont. 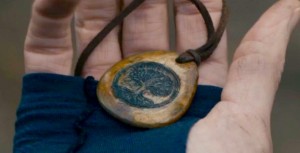 While she looks around, she hears a tapping sound.  She follows the sound down through the Abbey’s basement tunnels and finds the “monument” to Michael. Despite the viewers yelling at their televisions telling her not to, Julia goes ahead and breaks it open.

She shines a light down and a hairy, disheveled but very alive Michael cringes from the light after 30 years in the dark pit. She came 30 years ago and she needs help now to find something – a child.  A disease is killing the immortals and they believe that this child’s cells might be the cure that the immortals need.  He tells her he cannot tell her about the child but he can show her where it is.  Really, Julia?  You’re going to go with him?!

Michael takes her to a cliff and pushes her over the side.  She somehow grabs on.  While she struggles, his head has been sliced off. Caleb saves the day with her sword, I guess the sword works! 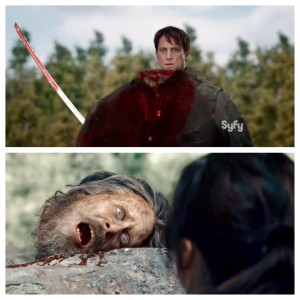 My last thoughts on this episode: Is Caleb — the baby??!!  Will we see Amy again?  I wonder if we will see Michael in flashbacks, I like Stephen Weber.  Will we see when and how Julia comes to the island in the present time?