Tokyo Ghoul Root A: City in Waiting starts with the raid on Anteiku. Everyone at CCG is trying his or her best to prepare for the upcoming raid. Most of the raids on various ghouls end with many casualties, so I can only imagine how these men and women must feel during their preparations. Members have to work on their testament. This gives them the chance to leave behind a message for their loved ones in the event that they do not make it out of the raid. It also gives them a chance to wrap up any affairs that need to be taken care of.

Throughout season one of Tokyo Ghoul we have become accustomed to seeing various CCG members die. However, we never really had the chance to see how things happen from their end of the story. This is the main difference between the anime and the manga and it is one of my favorite things about Tokyo Ghoul Root A. We always viewed the CCG as the bad people and now we know that they are not that different from the other main characters of Tokyo Ghoul. They live and they die. They have hopes, fears, dreams, memories, and they have suffered just as the ghouls have suffered. They feel loss, they feel pain, and they feel anger.

The newer members of CCG are not sure what they should write in their testament. It reminds each of them that they could die at any moment during the raid. This fact makes them uneasy and extremely terrified. In fact, Juuzou is the only person who is not afraid of death or the raid. He has never feared death and he no longer fears the ghouls.

Before the raid, Akira and Amon both decide to pay their respects to the other members that have passed away. Akira attempts to kiss Amon. I had a feeling that would happen after seeing how close they have become over the past few episodes. However, I did not expect Amon to stop her. Amon is a character with a true sense of morality. Whenever it sways, he punishes himself more than he expects others to. Even when he faces death, he refuses to lose his dignity.

When the raid begins, the CCG are caught completely off guard. They did not expect to find two different gangs at Anteiku. They are forced to battle the Black Dobers and the Devil Apes. They were only targeting the Owl and Anteiku but continue to fight despite the shocking appearance of the two gangs. 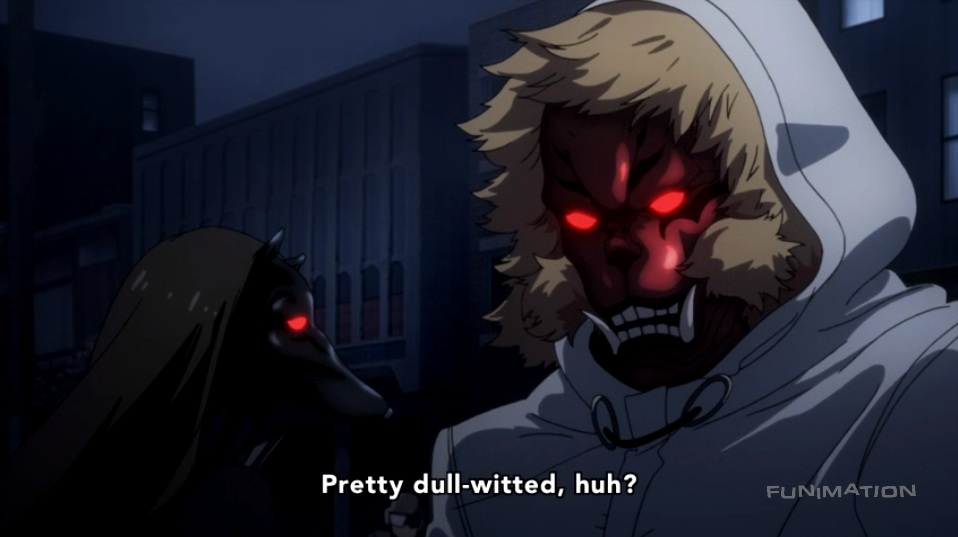 This is the one thing that the CCG have in common with other ghouls. Tokyo Ghoul Root A puts a very strong emphasis on how hard a person has to fight in order to keep what they love. Tokyo Ghoul is full of men and women who refuse to back down, no matter what. Yoshimura is one of those people. He has changed his ways and has tried to live his life in peace. He has even tried to pay for all of the bad things he has done. However, that does not mean that he is willing to lose everything that he has fought to keep throughout his life. He refuses to let the CCG take his entire life away and will defend Anteiku to the death. He continues to fight as the Owl. He is protecting more than Anteiku. He is protecting his son.

Touka does not want to stay hidden while her home is being obliterated. She has lost so many people and does not want to lose more. She feels like she has to go fight with her friends and family. However, everyone stayed behind in order to protect other members of Anteiku. These people feel as if they have lived too long and want to give the younger ghouls a chance at a good life. If Touka decides to fight with the rest of them, her comrades will have died for nothing.

Kaneki left Anteiku because he thought he was protecting them. He believed that he could get the strength he needed by joining Aogiri. However, it seems as if his plans were for nothing since Anteiku has been targeted by the CCG. Kaneki has a tough decision to make. Does he run away like the others or does he stay and fight for Anteiku? Nishio tries his best to convince Kaneki to run away. He thinks that the best thing to do would be to try to move on and have a life. He believes that everything they had at Anteiku is over. Tsukiyama, on the other hand, has a different argument to make. We all know that he is obsessed with Kaneki. Throughout the season, we have watched the way Tsukiyama does what he can to keep Kaneki safe. He does not want Kaneki to leave him behind. He tries to show Kaneki just how much he means to Tsukiyama and other ghouls, but Kaneki will not change his mind. He left to become a stronger ghoul. Now that he is stronger than other ghouls that have previously defeated him, he is determined to fight for what he loves. He does not want to watch as everything falls apart around him. He is finally ready to act.

The first half of Tokyo Ghoul episode nine gave us the setup for the raid that we needed. It showed us the seriousness of the situation. However, I loved the fact that it showed us everyone’s feelings on the situation. We didn’t just see it from the CCG side or from the ghoul side. We saw both. We were able to watch as Takizawa completely fell apart at the prospect of dying during the raid. I felt his helplessness and his gripping fear as he attempted to work on a testament. We saw Kaneki’s own reaction to losing everything and we saw the resolve in his eyes once he made his decision. Even though the raid has just started, we can already feel the tense emotions that are flying everywhere. What will happen in the next episode? Will the ghouls finally come together for a final showdown?

Some things in the anime were not as serious as they were in the manga. For example, Tsukiyama’s attempt to keep Kaneki safe did not carry the same weight that it did in the manga. Tokyo Ghoul Root A portrays Tsukiyama as an insane ghoul obsessed with eating Kaneki. However, in the manga Tsukiyama was there for Kaneki throughout his journey. They were extremely close friends. In addition, the anime has not mentioned Aogiri in quite a while. Kaneki has not had anything to do with Aogiri since the raid on Cochlea. It could not have been an easy task leaving the group. I wonder if this will be brought up in the future. There are still a lot of loose ends that need to be tied up and I hope that it can be done by the end of the season.