Coppelion is an anime that is based on the manga written by Tomonori Inoue. The manga was released in 2008 and has more than 20 volumes for the anime to take full advantage of. The entire series only has 13 episodes. Go Hands, the same group that did the animation for K, has a hand in Coppelion.

The show takes place in the near future. An accident happened outside of Tokyo that forced the government to evacuate all civilians from the city. It became overrun with radiation. In fact, men and women are no longer able to set foot in Tokyo without wearing hazmat suits. A couple of zones in Tokyo are so full of radiation that these suits do not offer any type of protection.

Since no one is able to enter the deserted city, the government created a solution. We are introduced to three extremely special young girls who are a part of the Coppelion class. These teenagers have been genetically engineered and are not harmed by the radiation in the city. They have been tasked with the job of searching the city for any potential survivors. Quite a few different people have stayed behind and have found a way to survive in the wasteland. While it may be hard to understand the reason to live in a forgotten wasteland full of radiation, most of them have reasons that make sense. We do not get too much detail about the full storyline. However, we do get enough information about the lives of the people who still live in Tokyo. We are able to follow each episode easily. Each of the three girls has different abilities that are designed to help them survive in the wasteland.

Click here to purchase the complete season on Amazon.

The Blu-ray and DVD combo pack for the complete series of Coppelion offers fans the new English language and the original Japanese language track in stereo. It was encoded with the Dolby True HD codec. Although some anime shows can get boring or not interesting enough by having too much action or too much dialogue, Coppelion has found an even balance.

The video has been transferred in 1:78:1 in 1080p with the AVC codec. The Blu-Ray and DVD combo pack for Coppelion: The Complete Series comes with two Blu-Ray discs and two DVD discs. The Blu-Ray discs feature a complicated view of abandoned Tokyo while the DVD discs are plain and only show us images of two characters from the show. However, each disc shows us what they contain clearly. The animation for Coppelion is beautiful. The colors are vibrant and it is not difficult to see what is going on during the action scenes. In addition, everything is extremely detailed. It can be extremely difficult to make a character’s surroundings seem deserted and torn apart. However, we can see scenes of nature taking back the city as other events unfold. The animators did not sacrifice attention to the characters for attention to the background. Everything has been created with a lot of hard work. 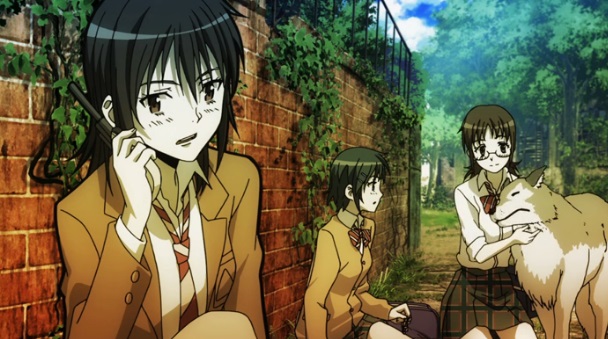 Coppelion: The Complete Series is packaged in a thicker Blu-Ray case than other Blu-Ray series packs. This makes it easier to hold all four discs. An O-card comes with the case. It provides detailed images of the cover and the back. The front of the cover features the three main characters in the ruins of Tokyo. The burned Coppelion logo is featured at the top.

The artwork on the case itself depicts Ibara standing in Tokyo by herself. Although it is not as colorful as the O-card, it still looks good. A couple of scenes from various episodes are shown on the back. All of the special features and technical specifications are listed clearly on the back of the case. In addition, it is possible to change the artwork for the case. The reverse side shows a pushpin board with various photos of scenes in the show. 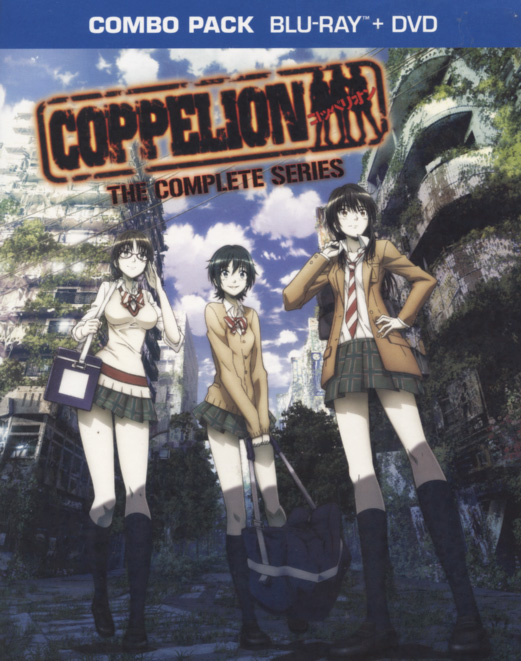 There are not too many different special features in this combo pack for Coppelion: The Complete Series. Special features include clean versions of the opening and the ending for the show. In addition, we have access to a bonus art gallery, and original trailers.

The makers of Coppelion had plenty of material to use for the complete series of Coppelion. There is an entire world that can be explored in this story. The first half of the series gives us a collection of stories as the girls meet different people and try to rescue them. The second half of the story sends us deeper into the huge storyline that is offered. We learn more about how everything started and everything seems to fall into place. However, this does not mean that some of our questions will be answered. As long as you do not pay too much attention to certain scientific explanations that do not make much sense, you will enjoy yourself. I especially liked the 80’s animation style.