Daredevil: How Marvel Kicked Even More Butt With This One

Wow! So, I’m sure everyone has binge watched and/or slowly taken their time with Marvel’s newest achievement, Daredevil. It’s incredible, the writers handled it with such ease and grace that it flowed so well!  Here’s my review, I started watching it at 12AM on its release day and finally finished it Saturday *Shakes fist at work getting in the way of my binge watching*

*SPOILERS* And some pretty big spoilers at that, please don’t continue reading if you haven’t seen it all yet! 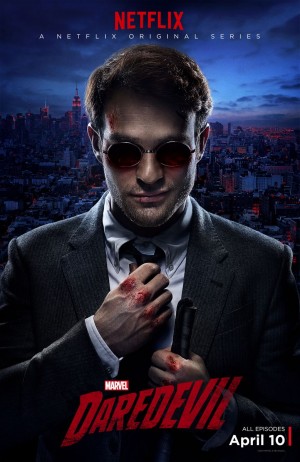 Daredevil’s origin is not much of a secret to those who are slightly familiar with the character and how he became blind is even less of a mystery. I’m sure it was a daunting task to put this to the screen again, but holy crap did I get chills when young Matt was screaming “I can’t see!” The young actor, Skylar Gaertner, is also something to talk about. In a show with big names, (Vincent D’Onofrio and Rosario Dawson come to mind) he definitely handles his own in this role.  Everything that he does with his father and with Stick later in the series really shows his acting chops. When we first see “The Mask”, as they call him in the beginning, he’s kicking major butt on the docks of Hell’s Kitchen.  The show has a good sense of humor, and I especially enjoyed the one baddie who was sitting in his chair eating while the fight was happening. 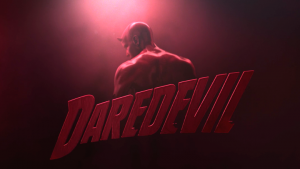 Another thing I have to rave about a little is the opening credit scene. I didn’t skip it once and I’m one of those people who hates watching the same stupid opening credits every time I want to watch the show.  I didn’t even use that time to do something else like check email or text, I literally watched it all 13 times. It’s gorgeous, it’s strangely seductive, and it’s really genuinely cool… Okay, I’m done raving. 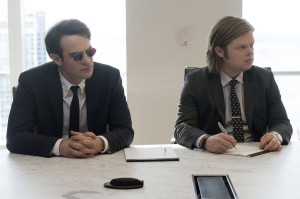 The show starts off at a nice pace, starting right in with an interesting case and a good balance between Matt’s life as a lawyer and his life as “The Mask”.  They have a fun time with Foggy, who has some wit to him and showcase the friendship between the two really well.  You can definitely tell that they’re yin and yang to each other, Foggy being the crazy “act-on-impulse” one and Matt being the “calm, cool, and collected” one.  They chose two lesser-known actors, Charlie Cox and Elden Henson, who are exactly as the characters should be. 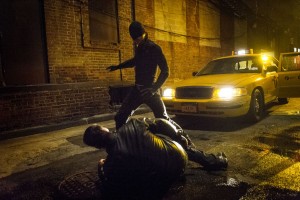 The Mask himself is a exciting character, the way that they use his heightened senses is just another testament to the fact that Marvel nails their characters.  I was curious about how they were going to show his ability to read people and the heartbeat detection for lying and they made you feel as though you felt the same things as he did.  The fight sequences are also something to rave about; the choreography is damn-near perfect. I mean, the way they handled Matt’s abilities is so flawless.  They show how Daredevil uses his surrounding and the other enemies as leverage if he’s losing a fight.  The show continues at a quick pace, with episodes introducing new characters, such as the big bosses who each have major roles to play, and an even thicker plot with Fisk. WILSON FISK! 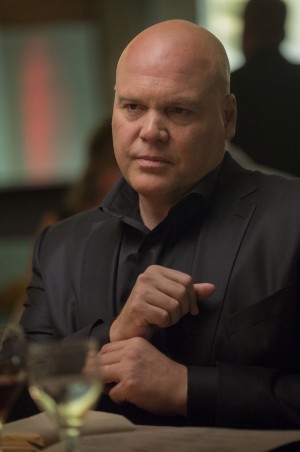 Let’s talk about Fisk for a moment shall we? I’ve been a bit in love with Vincent D’Onofiro since I was 14 or 15, I watched Criminal Intent after school every single day. I wanted to be a criminal investigator because of Vincent!  Marvel pretty much solidified my desire to watch this show when they announced that we was playing Fisk. I love how the little intricacies show his soft side; for example at dinner with Vanessa when he reminisces about his childhood and the feelings he had about his father, then they turn around in the same episode and he bashes the Russian’s head in the SUV door because he interrupted his nice evening.  How absolutely great was that?!  Then, he turns around and is a softy again.  Some of my favorite Fisk moments are shared between Fisk and Wesley.  They show his vulnerability and his dependance on Wesley, and prove that without him, he can’t fend much for himself.  Fisk is such a dynamic character and watching his transformation from his first appearance all the way to the bitter end is a beautiful thing.  Vanessa helps him come out of the shadows, she makes him stronger than he ever imagined and when they show what he looks like through her eyes you can see the confidence he feels. 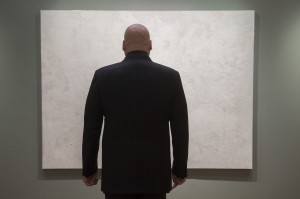 The meeting of Murdock and Fisk was bloody perfect.  The show made it seem as though Fisk knew exactly who and what Matt was, of course they didn’t say that but how hesitant Fisk was and how he observed Matt made me feel that way.  There are a few silly things, for instance Matt having a touch screen as his personal phone is a bit odd, though I guess he could use voice commands.  I love that they didn’t tone down the subject matter, which is brilliant because his reason behind becoming The Mask really hits hard. 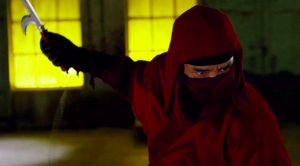 An epic battle went down between Nobu, our good friend Peter Shinkoda, and The Mask.  Proving once again the fight sequences are just impeccable.  It hurt to watch The Mask get taken down and then taken advantage of by Fisk.  Nobu met an untimely and unfortunate demise at Fisk’s hand and this shook the tables as far as the big bosses went.  I mean, taking out the Russians had been discussed with everyone, taking out Nobu came as a big surprise.  This epic battle set up a huge event in Murdock’s life, and that was when Foggy found out who he was. 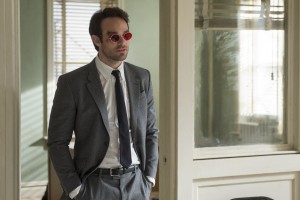 That really shook things up for Matt. Not only had Claire left, Fisk won, and he had witnessed a man burn to death, but his best friend found out that he had been lying to him throughout their entire friendship.  Episode 10 was a gut wrenching one, they mixed the present and the past together going between Matt’s memories of his friendship with Foggy and then coming back to Foggy’s anger at him.  Then Vanessa was poisoned and watching Fisk break down was really upsetting, even though he is the baddie.  Again, the writing on this is top notch.  Each character gets their own spotlight and they show so much depth in every one.  Even Karen, Wesley, and Ben have exploration to them.  There are little nuances in every character: the way Fisk talks, Wesley’s facial expressions and the way he holds himself when he takes authority vs. how he is with Fisk, I love it.  I love how they make Wesley shine before his demise, he finally becomes his own person taking care of a Karen, but dies protecting Fisk.  When Fisk can’t find Wesley is when you see how dependent he really was on him. 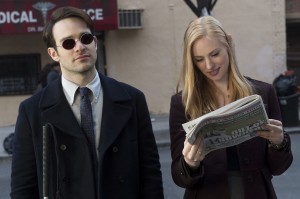 The ending of the show was great too.  From Fisk to the Daredevil costume debut it was exactly how everyone hoped, incredible.  You walk away, emerging from a 13 hour binge, a week later taking your time, or after a few days of 4 or 5 hours of watching, feeling as satisfied as you ever have been with a show.  I mean, what a triumphant ending, Fisk is locked up, Foggy isn’t angry with Matt anymore, and Daredevil has a badass suit that he won’t he ripped to shreds in! 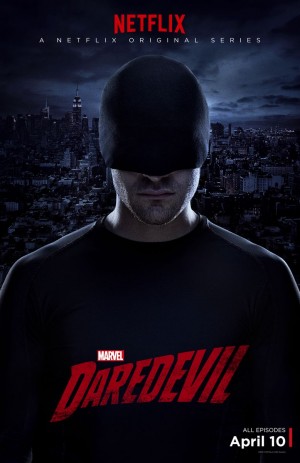 I give this show a 10 out of 10 and it’s moved itself up into my top 5 list.  The writing is impeccable, the acting is top notch, and the story never lags.  For a 13 episode show the fact that each character has such depth and screen time that you really feel like you get to know them is pretty impressive.  They left you wanting more and hoping that they have more to release sooner rather than later.  What other characters will they introduce? What villains are they going to have Daredevil face now that Fisk is in prison? How does Fisk become Kingpin? I can’t wait for all of these answers to be told.

For more Daredevil news stay tuned, as soon as we know anything, you will too!

The Locke family uncovers more magic within Keyhouse, while a new threat -- the most dangerous one yet -- looms in Matheson with plans ...

END_OF_DOCUMENT_TOKEN_TO_BE_REPLACED

The Sandman I'm not going to sugarcoat this. If you have not watched The Sandman yet, you need to change that. This show is not just f...

END_OF_DOCUMENT_TOKEN_TO_BE_REPLACED

Over the weekend during San Diego Comic-Con Marvel didn't pull any punches with their announcements! One of these announcements was the...

END_OF_DOCUMENT_TOKEN_TO_BE_REPLACED

It wouldn't be a San Diego Comic-Con without some fantastic Marvel news, and this year's triumphant return was no different! Marvel not...

END_OF_DOCUMENT_TOKEN_TO_BE_REPLACED

The drops keep on coming at Comic-Con. Revealed today during Netflix's panel on The Sandman, was our first full trailer for the series....

END_OF_DOCUMENT_TOKEN_TO_BE_REPLACED

Netflix has embarked on its most expensive and ambitious film premiere on the platform to date. The Gray Man, based on a book by the sa...

END_OF_DOCUMENT_TOKEN_TO_BE_REPLACED

Taika Waititi is back at the helm in the MCU. With this being his second Thor movie, comparisons to the first are certain to happen, an...

END_OF_DOCUMENT_TOKEN_TO_BE_REPLACED

It feels like it's been an eternity since Stranger Things was on Netflix with a new season and you wouldn't be wrong. Season 3 premiere...

END_OF_DOCUMENT_TOKEN_TO_BE_REPLACED

Ryan Reynolds seems to be able to do no wrong when it comes to picking and creating entertaining movies, whether starring in them or pr...