Things are coming together in this series. Hopefully, you are a little less confused. Lucy was the focus of this episode. We find that she is a drifter of sorts, who just happened upon our little town of Caldwell. One year ago, she arrived. Quickly finding a job at the local bar and quickly zeroing in on Camille’s father. Deep in his drink and loads of cash in his pocket was all Lucy needed to take advantage of him. 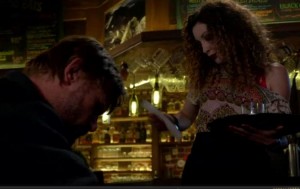 Now we find Lucy in the hospital, in a coma after being attacked in the tunnel. We now know it was Tony’s returned brother Adam, who is responsible for all of the vicious attacks. Lucy hasn’t gotten better and codes and actually dies, as the doctor tries to bring her back. As soon as the doctor records her time of death, she returns, with no ill affects of the attack and no scars from where she was stabbed! No one can understand what has happened here, and she has no memory of the attack at all.  Sheriff Tommy, shows her a picture of Simon and wants her to identify him as the attacker in the tunnel. She refuses and says she isn’t sure. Soon she starts hearing voices and murmuring! Has she really gotten a gift of clairvoyance, now that she is returned? Jack comes to visit her in the hospital. Lucy tells him she really can hear the voices of the dead now. She tells him his dead father was really killed while driving drunk and that he has a message for Jack. “He is scared for you” 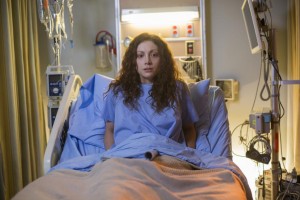 Peter drives until he finds Victor (Henry). He now knows who the little boy is. The boy he and his friend helped murder years ago. Back in his glory days, Peter was somewhat of a dirtbag. A failed robbery attempt left poor little Victor (Henry and his mother murdered! How is Peter going to atone for that? He takes the boy to a cemetery and confesses to the crime and points out that it was his crime friend who actually did the shooting, but that doesn’t take away the guilt that Peter has felt all these years. Peter pulls out a pistol and wants to offer himself up to the boy, but then has a crazy vision of a younger self in ski mask that walks up, points the gun at his head and pulls the trigger! Whoa, that was creepy! he is still standing, the vision is gone but the gun is still loaded! Victor/Henry just turns and walks away. 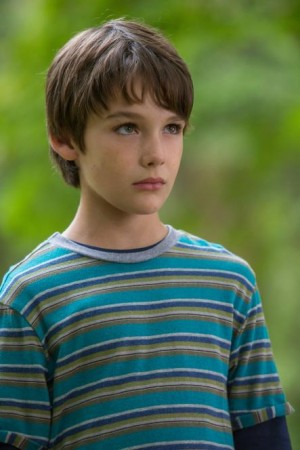 “I know who you are, you killed my mom! You killed me! 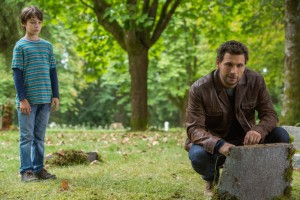 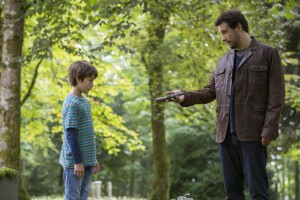 Claire and Jack are frantically looking for Lena. Even Claire has ideas that Camille has something to do with this. She and Jack argue and she tells Jack to leave and never come back.Later, Claire turns her sights back to Peter and ends up in his arms.

Lena has run from the hospital. She really has herself believing that Camille is trying to kill her because of Ben. She thinks Camille is punishing her for skipping school the day of the accident to have sex with Ben. She is so sick with fever from the large wound, that she passes out near the river. Adam finds her and brings her to the cabin. She wakes up scared and he calmly talks her down. He mixes a concoction of herbs to help her wound. 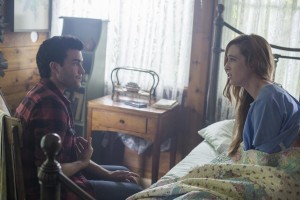 He tries to soothe her, tells her he was a bad person and Tony shows up! He hides Lena and goes to confront Tony. He tells him that their mother is inside, that she came back and she is mad at him! This is enough to scare the wits out of Tony and he leaves. Inside, Lena dons a new outfit, courtesy of the dead mother and feels total sympathy for Adam. She feels she needs to repay his kindness, doesn’t think he is so bad and starts kissing him! 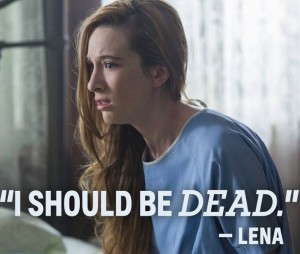 Camille, whose emotions are running wild, decides to give Ben a try. She calls him over to her house. He goes thinking that she is Alice the cousin. When he arrives, Camille tells him the truth. That she is, in fact Camille. He is surprised and scared and runs for the house.

George Goddard’s wife Helen, died 29 years ago. So why is she sitting in a interrogation room, eating a candy bar, talking to Julie? Julie recognizes her from the photos on the wall in George’s house. Julie is in awe, but seems to believe Helen. And she realizes that Victor-Henry is also a returned. But why? Julie wants to know how you know that you are dead, Helen replies, “there’s only one way to find out.” Creep factor off the scale! Taking this to heart, Julie argues with Nicky, saying that she believes Helen and thinks she herself is a returned. and leaves to find out! While Julie is on the verge of stepping off the damn to see if she is really dead, Victor/Henry shows up. She asks him is she is like him. He tells her that she is the fairy that his mother said would protect him. She agrees to be whatever he wants her to be.

What is happening here? Why have they all returned? Are they here to right the wrongs others have done to them or to impose guilt on them? Why are they all so voracious when it comes to food? Keep watching to find out more of the secrets held by The Returned!

Inside the Episode 6 – Lucy

Connect to the Show The Returned