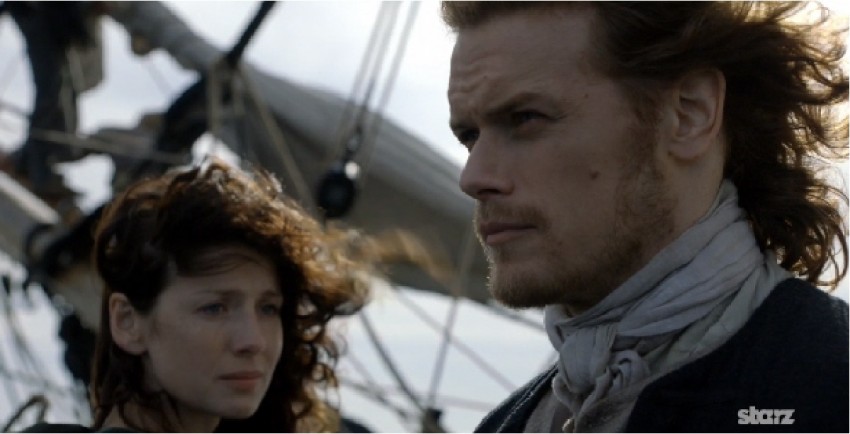 It’s been a real ride, this premiere season of Outlander. By car, by horse, and through the stones – we’ve taken a trip that’s been both wonderful and difficult – so glad we went, but at least for these last two episodes, we never want to go through that again.

Along with Wentworth, this has been a real tour de force for our actors. I’m in awe of their ability to convey the depths of so many emotions – rage, grief, lust, pain, and most of all love, in all of its positive and negative ways. And whatever the shortcomings of the script – and there have been shortcomings – Sam, Caitriona, Tobias, and the others have been magnificent. I’ll be happy to be part of the charge for #EmmysforOutlander – every acting award possible should be laid at their feet. Later on this summer, we’ll have a discussion about the season as a whole, but for now, let’s talk about To Ransom a Man’s Soul. 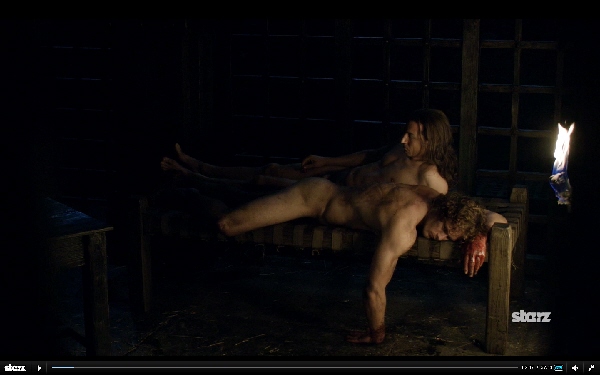 The rescue, from stampeding cows to Rupert’s wagon driving, was excellent. Spare and graphic, no need to show more than the moments of grief on Murtagh’s face as he saw his beloved Jamie lying bloodied and tortured on the floor of the cell. There was no need for dialogue – from Randall leaving Jamie to find out what that unearthly noise could be, to Murtagh carrying Jamie’s unconscious body out of hell. Small moments – Angus twirling his dirk in his impatience to leave; Claire standing in the road, unable to bear the wait another minute. And even the touch of graveyard humor – Rupert asking, “Pardon the interruption – will you be wanting tea, or can I get this wagon moving?” This scene was perfection. From the dark to the light, I cheered their swift and safe rescue. 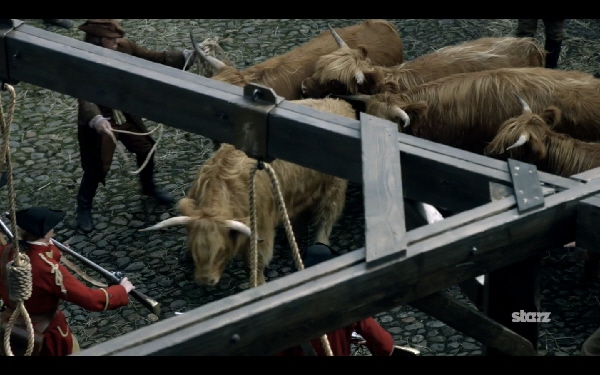 I’m happy that Randall’s rapes and torture of Jamie was no more graphic than it was. With the exception of one scene (which I’ll talk about below), the obsession we’ve seen building over the season came to a horrifically satisfying climax (sorry). Tobias Menzies’ performance was restrained but depraved – yes we do believe that he “can control the darkness within.” And Sam Heughan’s answering descent – from defiantly spitting in Randall’s face and telling him “do what ye must,” to his capitulation and final surrender – was frighteningly beautiful.

Even the scene between Murtagh and Jamie, all in Gaelic, was wonderful. Yes, it would have been nice to know what they said to each other, but did you really need subtitles to figure out that Murtagh was asking him to find it within himself to come back, and Jamie telling him that there was no possibility? Both actors have wonderfully expressive faces, and told us all we need to know about Murtagh’s anger, both over the treatment Jamie endured and his refusal to fight, and Jamie’s soul sickness and loss of his will to continue living. 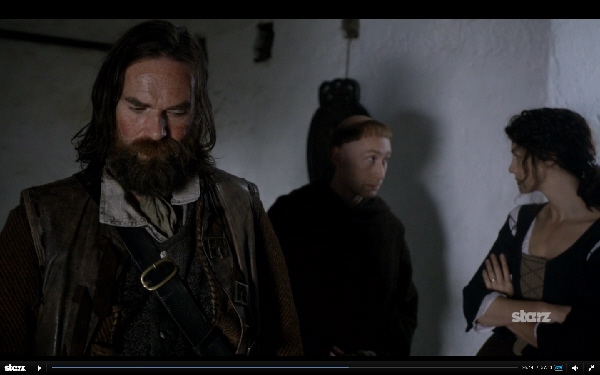 And Claire’s fight? Caitriona displayed a great range (and has made huge leaps in her abilities as she’s settled into this part), desperately trying to find something for Jamie to hold on to. She’s willing to take on any challenge, if it will possibly help Jamie. Murtagh tells her “I’m saying that maybe the only way to save Jamie is for someone to step into the darkness with him,” and Claire doesn’t hesitate to grab on to anything, no matter how much of a long shot it will be. And that leads us to –

Shortly before this episode aired, Diana Gabaldon tweeted out her personal thoughts about the episode, the actors, and comparing the book to screen. “Put down the book,” she said – but it’s not that easy. Had I not read the books, and loved everything about them, I never would have watched this show (first, I wouldn’t have had Starz – which would have been a major obstacle). And taken solely as a TV show, without any knowledge of source material, I think the show is beautifully designed, and masterfully acted – but lacking. I’ve said many times in my reviews that I’m perfectly fine with adaptations, with changes from the source material – and some of the changes have been quite effective and interesting – as long as the scripts remain faithful to the emotional honesty of the original material. And in a couple of major ways, this episode has demonstrated a lack of understanding of that emotional quality, of which scenes truly embody the spirit of Diana’s books (and I’m not talking about the hot springs scene, although I would have loved to have seen that).

Throughout the season, I haven’t felt that Ron Moore and the writers have thoroughly understood the basic qualities that have made Claire and Jamie resonate so strongly with readers. The TV Claire has been too emotionally fragile and too humorless. TV Jamie has not been mature enough, too adolescent. And the relationship between them, which is the heart and soul of this remarkable series, hasn’t been given the time to develop. The viewer hasn’t seen enough of their growing love to completely buy into their soul connection. We didn’t see enough of Claire’s struggle at the stones – or enough before that to understand why she would have such a struggle. It’s not at all on these wonderful actors – they can only act to the best of their ability within the script they are given. 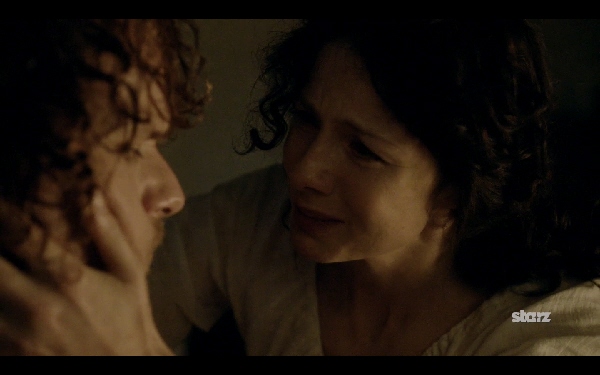 The first scene that I have trouble with is Claire’s “ransom” of Jamie’s soul. It starts out fairly faithful to the book, but doesn’t go far enough. Jamie’s soul is destroyed; Claire’s love won’t be enough to bring him back. The show wants us to believe that just by telling Jamie that she will die with him if he leaves her, Jamie is set on a path to healing; in the book, Jamie must believe that he’s overcome the devil that’s stolen his soul, and must be pushed to the brink to find the strength to fight. In the book, Claire becomes Randall in Jamie’s deliberately drugged half-consciousness; in the show, she merely recalls Randall to him, and appeals to his protective nature – the instinct that got him into this in the first place – and he makes huge strides toward recovery. Is that honestly enough? To go from zero will to live to ok, I’m ready to get up and fight, in one conversation?

Issue 2 is with Randall’s final assault. Why in the world would he try to get Jamie to believe that he, Randall, is Claire? He even pulls the tie from his hair. Randall hasn’t demonstrated any interest to this point in gaining Jamie’s surrender in that way – he wants to prove to Jamie that his “love” is superior. In the book, he demands of Jamie, “Can she do this for you? Can she make you feel this way?” Randall is, among other sins, a completely ego-centered being. He would never want Jamie to surrender under a false assumption – that he is actually surrendering to Claire – and this is a jarring note. 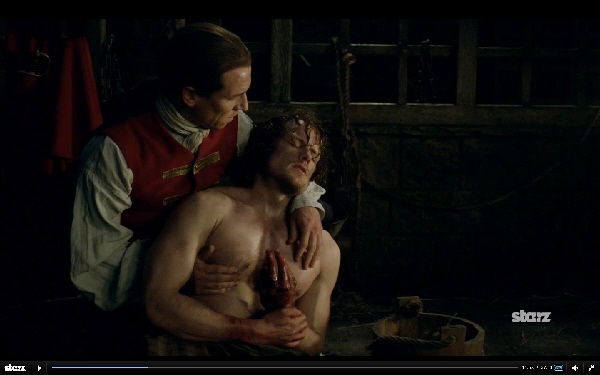 And my final “bad” scene is the show’s last one. The pregnancy announcement felt rushed and incomplete. At least that we have seen, Jamie and Claire have not rediscovered their emotional connection, and I think it was important for the viewer to see and understand that they now face the future together – there will be setbacks, for sure, but they see they can now have hope that their love is intact, and the pregnancy is the visible demonstration of that love. Instead, we get a hesitant, unsure Claire coming to a hesitant, unsure Jamie with the news.

Really, Angus? And Ron Moore, was this necessary? Wouldn’t it have been better to see the side of Angus that we have had brief glimpses of – to have him recognize Claire’s bravery and determination with a respectful kiss? Instead, we’re pulled out of the moment for a quick, unneeded bit of what passes for humor.

(Oh, and shouldn’t Claire have remarked on Jamie’s black thumb sticking out of his bandages? Isn’t that a sign of gangrene?) 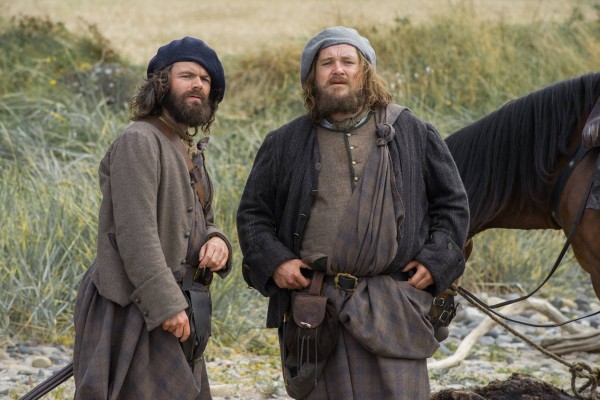 This episode would have been much better with a little more time. Claire’s confession to Father Anselm was serviceable, but time didn’t allow for an honest reaction to its miraculous nature; and while they weren’t absolutely necessary, the book’s scenes of Claire’s spiritual healing through Anselm’s discussion about her lack of committing a sin by loving and marrying Jamie, and the lovely scenes of the Adoration – and of course, the hot springs (ok, if you don’t know what I’m talking about, read the book – yes, I finally said it) would have helped the viewer ransom their own souls, coming off the blackness of the past two episodes. Had we had less creative filler – the addition of the Watch, the stretched-out Search – we could have had the past episode end with the rescue, and given this episode at least 10 more minutes to create a more uplifting ending. I loved the final view of Jamie and Claire, sailing off to what we can only hope (at least until next year) is happiness – but I would have liked to have had more to hang on to, over the coming months of empty Saturday nights. Now, I have to wait with the rest of you for our next fix – even with its shortcomings, I’m still thankful to Ron Moore, et al for this wonderful gift of a show! 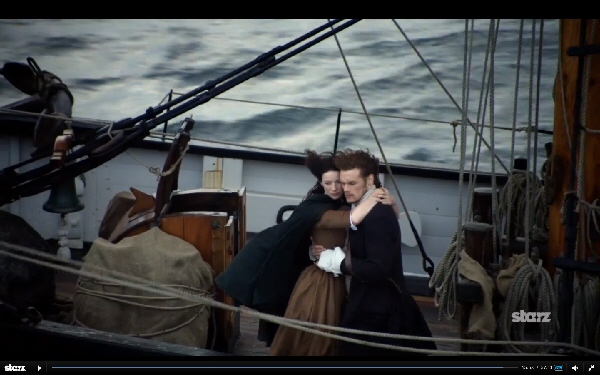 For an excellent interview with Ron Moore, and some info about Season 2, read this article from Deadline.com.

Stay with threeifbyspace during Droughtlander – I’m expecting to complete a big interview next week, and to have some fun and exciting contests coming up!

What did you think of this episode? Was it what you were hoping for? More? Or not enough? Leave your comment below!