The season finale of Supernatural is a true cliff-hanger, will Castiel kill Crowley and will Rowena get away and more importantly what will happen to Sam and Dean. 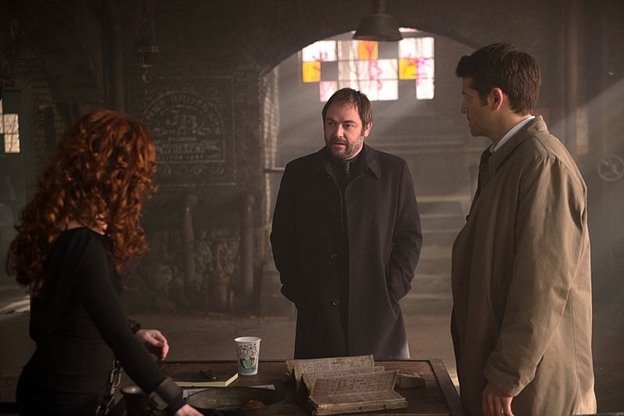 We closed the season with a newly reaffirmed Evil Crowley, a restored Angel Castiel who does not seem to be as powerful as when we first met him and a mark free Dean.

Dean killed Death, not to certain how that happened ~ killing Death seems like a foolish idea. Maybe it is all just a dream, kind of like the end of Dallas. That would be lame but efficient.

This episode showed us a dark Dean, definitely not the slightly soft Dean we know and love. But that was to be expected given the progression of the mark.

Sam’s character has been very weak these past few episodes, I put that on the writers not being able to adequately create the dynamic between the brothers that would convey both the inner resolve to help and the badass needed to call the shots.

I am glad the season is over and I hope next season delivers better writing and fewer character deaths. We want to root for Team Winchester not be disheartened by them.

I hope that Rowena gets caught up in the evil magic she unleashed and that the mark finds its way onto a strong being who will go live on another planet.

I would like to see Castiel as the powerhouse he is, in full glory Rowena could never have hurt him if he were exhibiting is full powers.

And where is the development of the Good side ? I am disappointed at the neglect of the writers to instill the idea that good is out there in greater force than just Dean and Sam.

Maybe I am too posh for Sam and Dean and the adventures of Supernatural, but I honestly feel that the show could be so much more than it is. Sharper wit, stronger portrayal of good as being good, and vanquishing the evil as needed.

This namby-pamby mix of Zen philosophy, religious ideologies, and evil really wants to be good muddies the lines of the original vibe that Supernatural gave off. Bring the viewer back to the roots and make the show strong again.

I shall close by saying I have been challenge this year in writing reviews on a show I enjoy. It made me angry and frustrated when all I could do was regurgitate the plot, but here, toward the end I have discovered the freedom of expressing my opinions about where the show should go. No one is really reading these so I am fairly happy with my opinions. Have a great summer everyone!! And thank you immensely to those who have read my reviews.