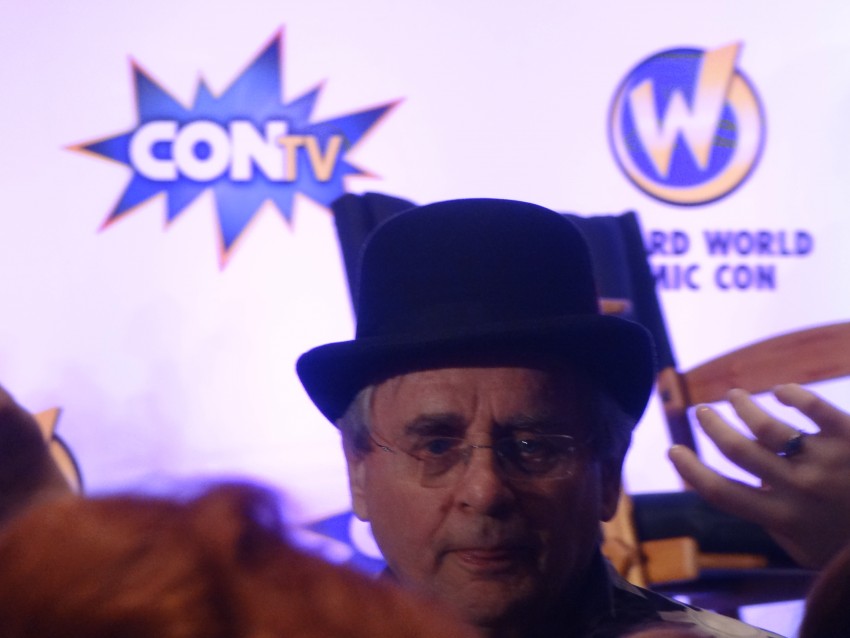 Sylvester McCoy started as a busker and ended up in Grand Opera. He’s played Low Comedy and High Comedy. Play and musical parts have been written for him. A producer once looked at his CV and told him he’d done everything in show business except ballet. McCoy once played the Fool to Ian McKellen’s King Lear for the Royal Shakespeare Company. He’s been on television for 36 years almost continuously. Many of his roles were for award-winning children’s TV and programs of great renown. The role he’s most known for is the Seventh Doctor on Doctor Who. McCoy played the harrowing role of the kidnapper and murderer in Channel 5’s opening night film, Beyond Fear. He has also worked extensively in film. His first was Dracula with Langella and Olivier and his most recent was Radagast the Brown in The Hobbit. His career in Doctor Who continues in audio stories through Big Finish productions.

Sylvester McCoy walked out to hearty applause with a fancy cane in hand, ready to answer questions from the audience–close up and personal! He never sat during the panel, instead he chose to spend his time out among the audience, weaving through aisles to greet each fan face-to-face (which of course made filming a bit difficult!).

But before he traveled out into the sea of fans, McCoy pulled out a selfie-stick to take pictures of himself in front of the crowd. He then proclaimed, “Splendid!” with a whistling emphasis on the S. With his talented tongue, he can also roll his R’s superbly, especially when saying “Rrrrrradagast the Brrrrrrown.”

Most of the questions posed were related to Doctor Who, but McCoy also spent a lot of time discussing his career as a whole and what got him into show business. He admitted that he’s not the real McCoy; the real Sylvester McCoy was a stuntman (also known as “the Human Bomb”) who, in part, helped McCoy become successful. He also explained that being an orphan was one of the biggest reasons he decided to become an actor. He wanted the people around him to notice him more because he lacked a true mother and father.

McCoy also discussed his time on The Hobbit and how he was upstaged by the cute CGI animals (rabbits and hedgehog, specifically) with whom he shared scenes. He shared a few stories of his time with Ian McKellan and other people who worked on the The Hobbit movies, as well.

McCoy also answered questions about some of his side jobs related to Doctor Who, specifically the Five(ish) Doctors Reboot and the Big Finish audio stories that feature him as a voice actor. And to the fan who asked who should follow Peter Capaldi as the next doctor, he responded, “Me.”

Sylvester McCoy was a big hit with his charm, wit, and humor. Minneapolis was delighted to have him visit!