Tomorrowland’s hopeful message is enhanced by a simple but wonderful Cherokee legend called The Two Wolves.

An old Grandfather said to his grandson, who came to him with anger at a friend who had done him an injustice, “Let me tell you a story.

I too, at times, have felt a great hate for those that have taken so much, with no sorrow for what they do.

But hate wears you down, and does not hurt your enemy. It is like taking poison and wishing your enemy would die. I have struggled with these feelings many times.” He continued, “It is as if there are two wolves inside me. One is good and does no harm. He lives in harmony with all around him, and does not take offense when no offense was intended. He will only fight when it is right to do so, and in the right way.

But the other wolf, ah! He is full of anger. The littlest thing will set him into a fit of temper. He fights everyone, all the time, for no reason. He cannot think because his anger and hate are so great. It is helpless anger, for his anger will change nothing.

Sometimes, it is hard to live with these two wolves inside me, for both of them try to dominate my spirit.”

The boy looked intently into his Grandfather’s eyes and asked, “Which one wins, Grandfather?”

The Grandfather smiled and quietly said, “The one I feed.”

Tomorrowland opened on Friday May 22nd.  Unfortunately, Tomorrowland’s first weekend was disappointing, bringing $40.7 million.  It feels crazy to call that number disappointing.  It cost $180 million to make the movie.  There are doubts that Disney will end up making a profit on this one.  It has been rumored that Disney would like it to become a new Indiana Jones type franchise, we’ll see what happens.  Hollywood likes its safety net of sequels and this weak performance will reinforce this habit.

The movie begins with what appears to be the traditional opening of Disney films, Cinderella’s Castle and fireworks.  Instead of the Castle, we see the silhouette of Tomorrowland with the fireworks above it.

George Clooney is Frank Walker a grumpy somewhat frumpy inventor who is speaking to someone and describing the dim and hopeless future that he sees.  In the background we hear Britt Robertson’s character, the energetic and hopeful Casey Newton, telling him that he is doing it wrong, that he doesn’t have to paint such a bleak picture.  As they tell their stories we learn how they ended up together.

George Clooney gave a good performance; it was similar to many of his characters, a bit grumpy and sarcastic.  He is definitely an actor who is aging well, and still looks sexy playing grumpy and frumpy.

I feel that Britt Robertson’s portrayal was believable and I like Casey.  I enjoyed watching her.  Her character in Under the Dome, Angie, was also a strong young woman with attitude.  I think she is an actress who seems to have a strong hold on who she is.  I hope she stays that way.  I will watch for more of her work for sure.

As expected, the movie is full of connections back to Walt Disney and the ideas he had for his utopia.  He designed the Carousel of Progress and It’s a Small World for the 1964 New York World’s Fair.

Young Frank is a genius kid inventor who brings his jet pack to the Fair to be looked at in the Hall of Invention.  Hugh Laurie’s character tries to discourage him by telling him it isn’t good enough. But next to him is his daughter, Athena, delightfully portrayed by Raffey Cassidy.  She likes Frank and gives him what we learn is a Tomorrowland pin.  The pin is the key to get into Tomorrowland.

Casey is an idealistic young woman whose father is a NASA engineer.  We see her on what can only be described as a badass motorcycle wearing all black as she is breaking into a NASA facility where launch pads are being demolished.  She doesn’t think the government should stop exploring space. I appreciate this young woman being portrayed as a strong, capable person, rather than the weak “princess” needing to be saved that we so often see in Disney movies.
Athena (who we later find out is a robot) ends up giving Casey a Tomorrowland pin.  When she picks it up she sees Tomorrowland.

There is a fun but short and wonderful comedic moment with Keegan-Michael Key and Kathryn Hahn as the proprietors of the funky shop where Casey goes to learn about the pin.  It might have been fun to have seen Key and Hahn do more.

Athena helps Casey find Frank then helps them get to where they will be able to transport back to (forward to?) Tomorrowland.  They end up in Paris on the Eiffel Tower (another World’s Fair wonder from 1889), apparently it is a rocket that will take them “there”.  There is a great little moment while they look at the display in the tower when Frank begins to wax poetic about the men shown there; Nikola Tessla, Jules Vern, Thomas Edison and Gustave Eiffel, four brilliant forward thinking inventors. 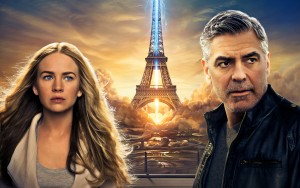 When they finally arrive there, it is desolated, dark and empty.  Nix shows up looking somewhat menacing.  Casey learns that Frank had invented a device to monitor the world and it has predicted that the world will end in 58 days. Casey learns that she is the one who can fix the world.  Her optimistic view of life is what will change the prediction and save us all.

As she is shown the disastrous future of earth, she and Frank come to the conclusion that the negative message of doom that is being shown on the monitor is in turn sending the message to earth, becoming a self-fulfilling prophesy.  They are feeding the wrong wolf!  They believe that a positive message would change the direction of things.

Nix is resistant and wants to keep the monitor going.  He used to believe that if people would see their demise that they might be “scared straight” into saving civilization.  He says that people have given up; it is not the monitor’s fault.  There are some who feel that this was a pretty slow moment in the film and that Nix spoke too long.  Nix does everything he can to keep them from changing things.  They realize that if they disable the monitor it will change the paradigm.  Nix will not bend, as they try to disable the monitor there is a fight.  I think that this fight scene was longer than it needed to be.  It might have been nice to have seen a bit more of the new positive Tomorrowland rather than so much of the fight. 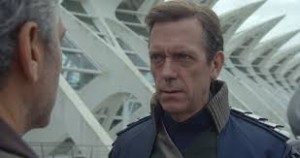 Along the way we learn that young Frank had fallen in love with Athena.  Frank was disillusioned when he learned that Athena is a robot, leading to the grumpy man we see in older Frank.   Athena tells Frank the reason he never could make her laugh, “Because he is not funny”, this is a sweet moment.

The movie ends with Frank and Casey talking with a group of people telling them how they got to this point.  (The beginning of the movie.)  They are talking to a new group of kid robots designed to find the dreamers on earth to keep them dreaming for the future.  They are going to feed the right wolf.

All in all, I enjoyed Tomorrowland, the concept of “feeding the right wolf” is one that we can all use in our everyday lives.

Tomorrowland coincides with the 60 year anniversary of the opening of Disneyland.  In 1955 “tomorrow” was set at 1986.  The Tomorrowland we see in the movie is definitely designed after this now antiquated optimistic techno-futurism.  Can it hold up after 60 years?  Can kids and teens feed into this vision, or is it only going to connect with an older audience? 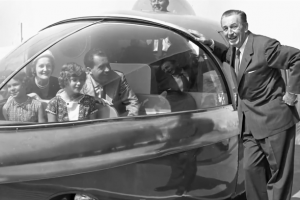 At the opening of Disneyland, Walt Disney unveiled  a plaque with the following quote:

“Here age relives fond memories of the past – and here youth may savor the challenge and promise of the future.” 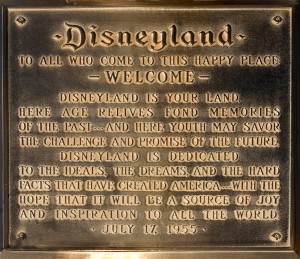