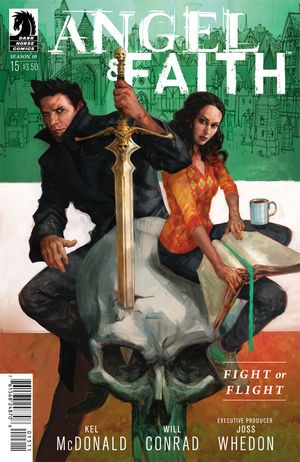 Angel & Faith turns into Angel & Fred in this issue, where two two former Angel investigations employees  go for a trip to Ireland. This review contains scenes of mild peril and some spoilers

In this Issue of Angel & Faith we are having the pleasure of a guest writer, Kel McDonald (Misfits of Avalon from Dark Horse) and you can tell that someone else is behind the pulling strings. But it isn’t bad at all. Faith is rather lacking in the whole issue apart from a mention at the end.

So what actually happens then? Well Fred is a bit worn out after having a god trying to take over her body for most of her time, so Angel suggests she should go away on a break. Angel himself is also rather worn out from having very strange dreams about killing people. Somehow she ropes him into coming along on her trip and they go to Galway in his old home country Ireland. Angel figures maybe going back to where it all first started would jog some memories and explain the odd dreams.

In Ireland they encounter some strange tour-guide witches that prey on fear. Eventually the witches attack them and Illyria steps out and beats them all down. Then after all this is over Angels phone rings and it is Spike, calling from the other comic, Buffy Season 10 wanting his help to take down Archeus, who if you have been reading Buffy know is behind the wacky dreams Spike and Angel have been having. The comic ends with Angel leaving for the States and Fred going off to get Faith to help investigate if there are any mysterious death by vampire cases in London.

I am aware I haven’t touched much of the story-line here, it feels pretty secondary to the fact that Fred is back, investigating things with Angel, she even mentions calling themselves Angel Investigations again. It is nice to have Fred back, but it makes me want Wesley and Gunn back too, if this will happen I don’t know, but a lot seems to be forgiven and forgotten when this new magic core popped up. So who knows…It is either way very enjoyable. I am just hoping Angel won’t ruin things for Spike and Buffy in the cross-over in next Buffy issue .

Just a quick note on the artwork, I think it was stunning this week, and sorry (not sorry) it may have something to do with Spike popping up in this issue, but that particular eye candy aside, all characters are beautifully drawn as are the surroundings.