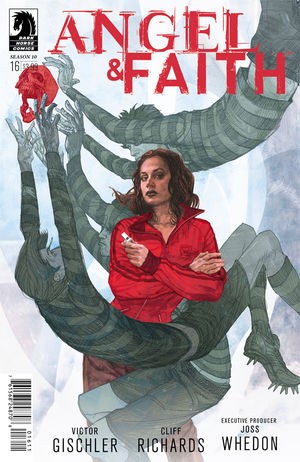 red are flying solo in this issue, while Angel is out of town, they embark on a 21 jump street-esque caper. This review contains spoilers.

With Angel out of magic town Faith ends up being the go to man-errr-slayer for policeman Brandt after she runs into him at a cafe. There is quite a lot of flirting going on here, specially whe she gets him to help her move her new bed in to her new apartment. A bit coy as of late is miss Faith, the old her would have had him “popping like a cork” whilst having coffe. Instead he enlists her to look into some naughty vampiric on goings at a school.

Fred on the other hand is trying to gather some information on Archeus for Angel, but when she approaches Faith for help, Faith tells her she thinks the two cases are connected. As they sit in a bar close to the school, some young men try to hit on Fred. She tells them off and goes to powder her nose. In the bathroom the boy comes after her, not taking no for an answer. Fred gets angry and the boy turns out to be a vamp. Lucky for him Faith stakes him before Fred turns into Illyria and would have ripped him into tiny pieces. The two meet up with Brandt afterwards and the idea of Faith going undercover as a gym teacher is born…

The comic also follows a nasty girls that is making life hard for a girl called Mary. Mary also is being approached by a bunch of odd girls wanting her to stand up to her tormentor and they tell her they can show her how to be strong. Fangy-alarmbells going off here.

The comic ends with Faith teaching her first lesson, where Mary and her nemesis Meredith end up in Faiths office for being naughty. Faith tries to tell Mary she can talk to her, but Mary runs off, Faith goes after her only to find her standing over Meredith’s dead body…

It is nice to see Faith again, I would say that there has been far too little of her in this series of Angel and Faith. I am also enjoying this more grown up calmer Faith. But she still is a tough cookie. Fred is lovely as ever, I did think it was a bit silly that Faith had to come to her rescue as she is quite capable of kicking ass herself.

The artwork is stunning again, the characters are absolutely beautiful, with lot of close ups of Faith face you can see a lot of level of detail here..

So all in all, good job, enjoying this issue a lot