Blood Blockade Battlefront’s newest character is completely mysterious. The only one who seems to understand him is Zapp. This is because Zapp spent a lot of time training under Shizuyoshi. He’s here now to help fight off the army of Blood Breeds that are on their way. However, that’s not all he is here to do. He’s also here to teach Zapp a lesson. Because Klaus isn’t as hard on Zapp as Shizuyoshi would have been, Zapp has fallen into an endless routine of drinking, women, gambling, and fast food.

Shizuyoshi is known as the Blood Battle God. He even invented the “Big Dipper” fighting style that Zapp is known to use frequently. Shizuyoshi has sacrificed everything in order to become the ultimate killing machine. In fact, there isn’t much humanity left in him. It was even hard to tell the difference between him and one of the Blood Breeds. He doesn’t look very human anymore and he can no longer speak English. Zapp is the only one who understands him so he must act as a translator. Since he has lost most of his humanity, he doesn’t do much to try to keep civilians safe while he is fighting monsters. This means it is Libra’s job to keep everyone safe during any battles in the future. 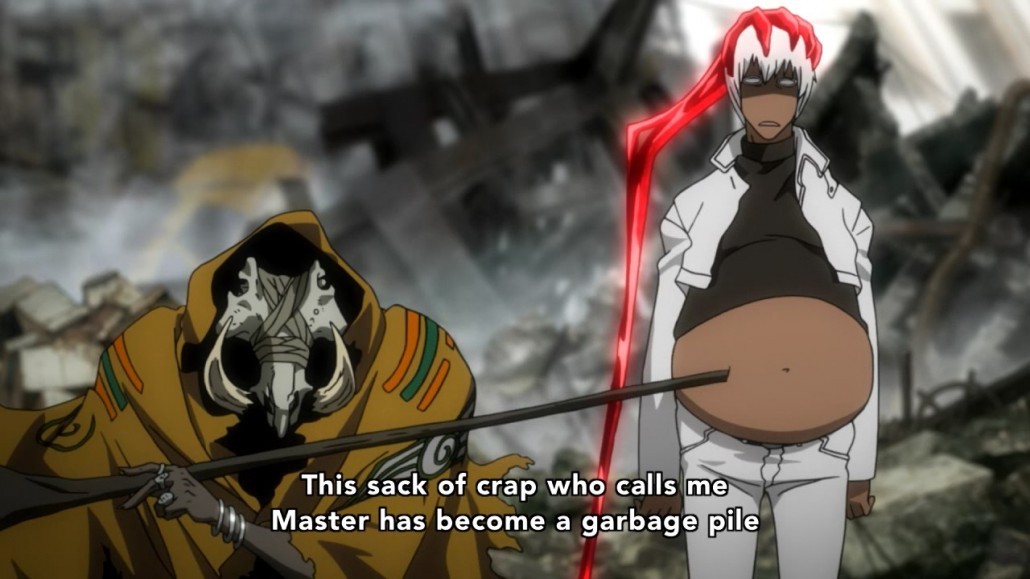 Despite Zapp’s protests, he is given a test. Shizuyoshi has made sure that the Blood Breed creature he was fighting remains still while it tries to regenerate inside of a dark egg. This egg attacks anything that could threaten it. It has six different eyes that can see all around it. In order to kill it, all of the eyes have to be taken out at the same time. Zapp has the task of killing it. If he can kill it in one shot, he can continue his life of leisure. If he can’t, the vampire egg will likely kill him. If he can survive the attack from the egg, he must go back to his training with Shizuyoshi.

For a while, Zapp just stands there freaking out. He doesn’t know how to complete his task and he can only focus on the horrible time he had while training under Shizuyoshi. Shizuyoshi does not understand that desire can often do more than fear in terms of motivation. Fortunately, Chan Sumeragi makes a promise of women to get Zapp motivated. With this promise, Zapp effortlessly takes out the egg. Even though the egg has been dismantled in a sense, it still has not been destroyed. What’s even worse is the fact that they have only taken out half of the vampire. Leo is still unable to read the true name of the vampire by looking at it since it is only the bottom half of the vampire. Shizuyoshi tells the gang that another student is bringing the rest of the Blood Breed by plane. They have another battle coming soon. In addition, it seems that Shizuyoshi was not aware of the tentacles around Hellsalem’s Lot that destroys all aircraft.

This episode of Blood Blockade Battlefront also gives us more information about Black and White. We learn that their real names are William and Mary. Their parents were casters; they risked their lives to stabilize the barrier between the Alterworld and Earth. When the Great Collapse first took place, it threatened to destroy both worlds. Everyone is alive because of the casters. Shortly after they lost their parents, they experienced something horrible and something similar to what Leo experienced when he received his God Eyes. We don’t know exactly what happened. However, we do know that White isn’t sick anymore. She stays inside in order to avoid something that is outside. We also know that Blood Breed Black is a part of the human Black. Is it possible that the entity that possessed him has something to do with this? Blood Breed Black also has plans with Black’s sister that we do not know the full details about.