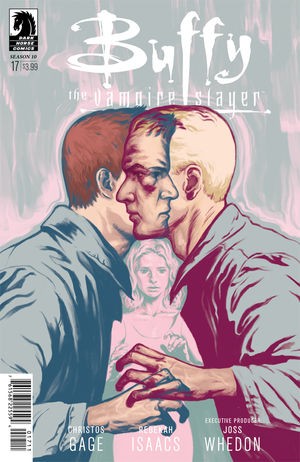 Buffy, Spike and the scoobies are joined by Angel in a hunt for Archeus. But their expedition turns into an quest into their own feelings for each other. This review contains spoilers.
WRITTEN BY: Christos Gage
PENCILS: Rebekah Isaacs
INKS: Dan Jackson
PUBLISHER: Dark Horse Comics PRICE: $3.50
RELEASE: July 22nd
Buffy has decided to split the group into two in order to pursue Archeus more effectively. Spike and Angel end up in different teams and spend most of their time grumbling about the other. Angel quizzes Xander about Spike and Buffy, and if Spike actually makes Buffy happy, which Xander seems to think he does. Angel then switches topic to Dawn and her artificial memories, he compares them to his son Connor and why he decided to give him false memories to protect him. But in the end Angel muses, the best way is to go about creating new real memories.
Angel also has an exchange of wisdom with Willow, but in this case it is Willow that stands for the great insight. She says there are some fundamental errors in the human/immortal relationship. Humans constantly change, immortals don’t, something Willow learnt from her own relationship with her snake-wicca girlfriend. Angel mutters about Spike being the same as him, but Willow interjects with that Spike got a soul fairly recently and that did change him. Angel grumbles that he too has changed, he used to be dark and brooding and now…Oh right…
Meanwhile Spike is annoying Buffy with comments about how him and Angel are very different, him English, Angel Irish for starters.
Eventually both teams meet up and run into Archeus, they question his tactics of this devide and conquer, and mock him a bit. This they probably shouldn’t have done as the demon Lord makes Angel make Shish kebab of Spike with his sword.
Oh…Oh..Oh..please don’t kill Spike!?! You knew that Spuffy wouldn’t be a happy ending as this is Whedonverse after all, but don’t break ours and Spike’s already please! Stupid Angel and his easily led soul…Anyway, counting the days til the next issue, well played Dark Horse, well played!