Dominion’s angels certainly aren’t the little cherubs we’re used to seeing, are they? From sexual morals to their propensity for violence, it almost makes you question whether the lessons religion has taught us aren’t really what God has intended. But then you remember that this is a fabulous work of fiction, and we shouldn’t abandon our teachings in case God doesn’t really mean for us to be “angelic.”

I apologize for not getting a review done for this episode earlier – I was out in San Diego for ComicCon, where I had the chance to attend the screening of the 1st and 2nd episodes, along with a couple hundred other fans, and with Vaun Wilmott, Dominion’s Executive Producer. You can see the introduction Vaun gave us below! 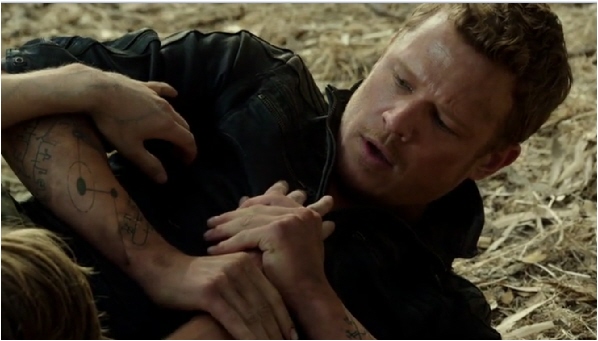 The Season 2 premiere gave us some really enticing glimpses of a new location – a small town in Alabama, seemingly protected by God as long as they keep a huge fire burning in the town square. Michael is soul-weary; his burst of murderous rage has shown him that he has a long way to go before he can really come back to being useful in the fight against Gabriel. And here is this town, peaceful and untouched. “How does this town exist?” he asks. “Untrained sentries at either end of town, a meager security force. Even with your weapons, the fact that you’ve survived all these years out here alone is impossible.” Could his Father really be present? Can Michael find some peace and regain a little of his angel sanity? (And what’s with the woman who sees him as he bathes in the sea?) 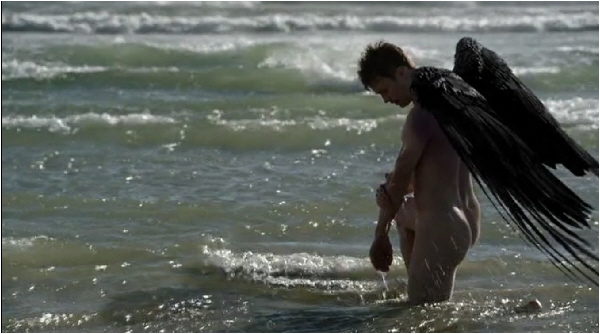 So we’re set up for many of the major conflicts – Claire’s disastrous attempt to take out Gabriel will have repurcussions; Alex’s powers are increasing, as we saw with the eviction he was able to perform; David Whele has gone over the edge – were you as startled as I was by the hole in William’s head? I wasn’t too surprised to see him sitting there talking to his father, but it got weird toward the end, and now we know why – he really didn’t exist! Dead William, though has good advice for crazy David – “Careful what you wish for, Daddy, it might bite you in the ass.” 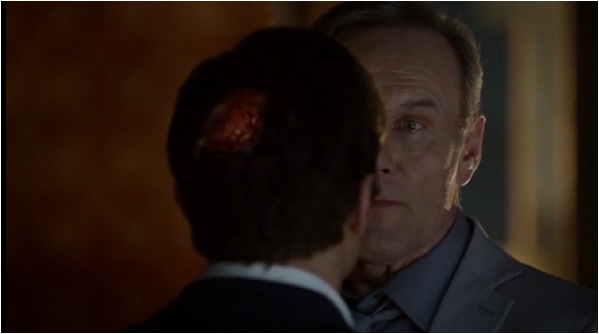 I really loved the little touches of unexpected humor, and Alex and Noma’s escape from the aerie, and then from the school were terrific. Alex wasn’t necessarily my favorite character last season, but in one episode, I got him – his ability to handle pressure, his growing willingness to take on responsibility. His powers are strengthening, as we saw with the effects of the eviction. During a Periscope Q&A session early last week before ComicCon, Vaun said that he has thought the show through for about five seasons – and this premiere episode gave us some fantastic hints that yes, there is plenty in this world to occupy many more years!

In Thursday’s episode 2, that world expands a little more. Think you know the lower angels? Maybe not! Be prepared.

Revelations: Life Since the Angel Apocalypse