Outlander at SDCC: Part 4, Ron Moore Talks Emmys and Playing to the Fans

For the final part of my Outlander at ComicCon coverage, I and a group of intrepid reporters got to chat with Ron Moore, the show’s executive producer. I had not had a chance to talk with Ron in the past – at the second half premiere in New York, he didn’t have time to stop and chat with bloggers. There’s so much to ask him that I could have monopolized the entire pressroom roundtable! (but of course, I’m much too polite to do that…) Ron was relaxed, joking with us that it was important to have his name tag with him since we’d have no idea otherwise who he was. He’s very passionate about Outlander, and that came through as he chatted.

A subject very close to all of our hearts was the lack of Emmy nominations for this terrific show. I asked Ron about that.

Q The Emmy nominations will be coming out soon (they were out on July 26), and Starz made a big push to have fans tweet out and promote Emmy nominations. Your wife has made no secret of the fact that she doesn’t care for this, she doesn’t think that Emmys mean a lot. What do you think that awards mean to the show or to your career?

A What it means to me is that I like being able to go back to Scotland and say, “you know what, your work matters. The fact that the TV academy recognized you, and your peers…” I like those people and all those different departments, and the cast… they all work very very hard. They all work harder than I do. Trust me. They’re out lugging cameras around in the middle of the night in the snow. That’s tough. So to be able to go back and say, hey, here’s some gold, or here’s this recognition, I think it matters for the morale of the show, I think it matters for people to be acknowledged. If you don’t get it, ok, it’s fine. Battlestar was ignored year after year after year. We were still very proud of it, and we were like, screw the world! We’re know we’re doing a great show, and we always felt that way, and it was always really annoying that Edward James Olmos never got a nomination – here’s one of the greatest actors, not getting an award, I could not believe that year after year he was ignored, those things are kind of frustrating, you know. I don’t think that Terry cares a lot one way or another, but I want them to recognize her work, I think that she’s done a fabulous job. Same goes for the cast, and same for the cinematographers, and on and on and on. These people do really good stuff, and I think it would be nice to have that recognition. 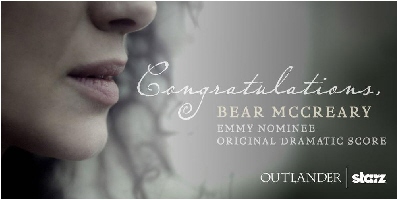 And the other reporters at the table asked about the look and feel of the second season,  how he keeps both fans familiar with the books and those who haven’t read them interested and entertained.

Q With so much of Jacobite history being intertwined with religion, was it a conscious decision to downplay Jamie’s faith versus Claire’s nominal Catholicism?

A No, it wasn’t a conscious decision. I think it was just a question of emphasis. We didn’t try to play it down, I guess it didn’t quite play into the story as much. We just didn’t write it, we could have, it wasn’t a strategic choice, or a creative choice, it just sort of evolved that way.

Q With the timeline changing in book 2, how difficult was it for you to adapt that and make sure that fans who haven’t read the books understand what’s going on?

A It’s a big challenge. The second book is much more complex, it’s a more difficult book to adapt, it shifts point of view, plays with time, it’s more political, dealing with the Jacobite rebellion, which most people in the country had never heard of, so it’s a challenge. We’re always trying to play to two audiences – there’s the book fans, and then the general audience who have no idea, and we have to play fair with both. Fans are looking forward to certain things, and you want to satisfy that, and at the same time you want to surprise them, you want to catch them off guard, you want to scare them, like “Oh my God, Frank’s going up the hill! If he goes through time, I’m quitting watching the show!” People across America are losing their minds. That’s fantastic. I enjoy that.

Q The teaser, where it was actually Claire’s dream –

A Fans of the books should also have discovery, they should be surprised. You want to engage their emotions as well. But then there’s the other half of the audience that has no idea what the books are about, so you have to tell them the story clearly, they have to be able to follow along.  I always make the comparison to Game of Thrones, I’ve never read those books, so that TV show has to stand on its own. It has to work for me, and it doesn’t matter if that scene is in the book or not, if I don’t get it, I’m not engaged any more. So we’re always trying to sort of keep both ends of the audience involved.

Q Since Tobias is not here, I’ll ask you – how are Tobias and and Laurence (Dobeisz, who will play Jack Randall’s younger brother Alex) getting along? Is he trying to mimic Tobias’ mannerisms at all?

A I don’t think he is, actually. We’ve shot some scenes with him, and we try to stay away from that. In the book, they’re so close together that she literally mistakes him for Jack from the first season, but … He looks pretty close, but I didn’t want to play that gag twice. There’s no way to really do that. Tobias couldn’t play Alex. That would be going too far. He’s not trying to pick up any of his tics.

Q Tease some of the new characters we’re going to meet this season for those who are not familiar with the books.

A There are several actual historical figures from the books who we’ll see for the first time. There’s Louis XV (Lionel Lingelser), the Comte de Sainte Germaine (Stanley Weber) is a real historical character who’s one of the villains in the show. There’s a gentleman named Master Raymond (Dominique Pinon) who owns an apothecary shop in Paris, he meets Claire and he’s got some mystical things going on. There’s Mother Hildegarde (Frances De La Tour), who’s a nun who runs a hospital in Paris, she’ll meet Claire in the show. She has a dog, Bouton, who the fans love – trust me, Bouton is in the show. There’s a boy named Fergus (Romann Berrux) who becomes very important, especially as the book series goes forward, and he’s introduced this year. Bonnie Prince Charlie (Andrew Gower) we’ll meet this year, a real historical figure here. I’m sure I’m missing somebody. Those are the key players, I think. Louise de la Tour (Claire Sermonne) is a friend of Claire’s in Paris, who plays an important role. Jared (Robert Cavanah), Jamie’s cousin, is a new character. 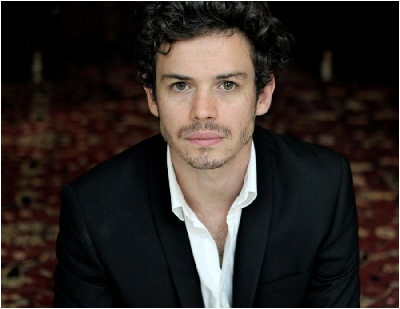 Q Scotland was obviously such a major part of the first season, the culture and everything, it almost became a character in and of itself. For the first half of the second season taking place in France, do you try to mimic that sensation in a way, do the same thing where with Claire and Jamie there’s so much discovery and wonder that matches the audience?

A Yeah, we’re plunging them into another world. There were no costumes, props or sets that we could use. We had to create a new series for the second season. The audience will go, “wow, this is Outlander?” It doesn’t have any of those elements in it other than the three characters who came over. Everyone else is left behind. It’s a whole new world, a whole new story, and eventually we get back to Scotland, so we regain a lot of that stuff from Season 1. The rhythm of the scenes is different, the way it’s shot is different, the fabrics are different, the color palette is different, even the most basic – candles are different. The heavy, big candles in Castle Leoch are now fine, tapered candelabras. There’s a lot of gilt, a lot of fine china and silver, it’s just a completely different world. 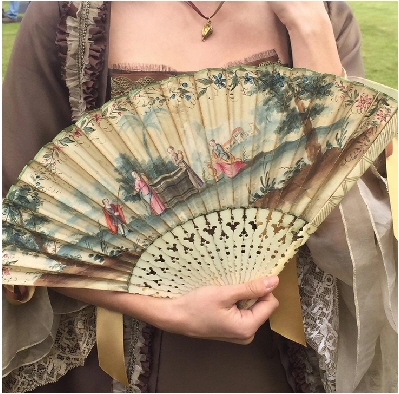 Q Will the show address the time-traveling aspect and how it affects the future?

A Their story in season 2 is that they’re trying to change history. That’s a pretty big deal. Her knowledge of the future helping inform them to figure out a way to stop the Jacobite rebellion, stop the disaster at Culloden, forms the mission statement for season 2. There’s not a lot of time travel, like season 1, in the show, but it’s still such a key idea that it still propels a lot of the action in terms of what people are doing.

Q Does Claire think about that the future she knows might be gone if they succeed in this?

A A little bit. It’s tricky. We don’t try to pick up too much of – we don’t call them different time lines, we don’t want to get too far into the science fiction aspect of it, we try to play enough of it so the concept is clear to the audience, but there are definitely some things she worries about that could be changed by her actions in the past, but we try not to get too bogged down into the butterfly effect of this or that,  or God knows what now – Europe is taken over by Nazis .

Q Since there are three fewer episodes, was it a challenge to fit as much as possible into the season?

A Definitely. Another three would have helped, but that’s just the gig, you know, it’s still more episodes than Starz typically shows. I’m fine with it. I knew going in that there’s 13. Fortunately, it’s the thinnest of the books, not like the next one, that book (Voyager) is a whole different animal.

Q Is there talk of maybe splitting (Voyager) into two seasons?

A We’ve talked about it, but no decisions have been made. I haven’t really focused on that yet. I don’t have a third season pickup, so I don’t have that problem yet. Eventually we’ll have to have that discussion. I don’t know what the answer is, maybe, maybe not. We’ve always talked about generally doing a book a season, but these are books that are just big and complicated, but once you do that, ok, are we ever going to get to the end? You start thinking about how many years we’re talking about, I don’t know. I really don’t know the answer to that. 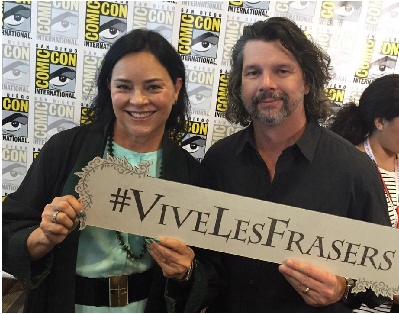 Q The season was split into two, and the key art was decidedly split into the glowing, beautiful hues of Scotland into the grittier, more dangerous, darker, second half. In season 2, the first part is in Paris, and then they return to Scotland. Has the look been decided for it, as far as the look you want to give it?

A Scotland will be a war-torn Scotland, so it’ll be a darker, heavier more threatening sort of environment when they story gets back to it. And the Parisian part is much richer, romantic, a different world, we play that different – it’s shot different, it has a different mood and feeling to it.

Click each part to see the rest of our coverage: