Terminator Genisys Review: Round and Round and Back Again

My head hurts now. Twisted, fractured, doubleback, and branching don’t even begin to describe the timeline put forth in Terminator Genisys. But with a little bit of reality suspension, it all seems to work. Sure, there are critics who have not liked this fifth installment in the Terminator movie series (not including the TV series The Sarah Connor Chronicles) (in fact, just now, the CBS Sunday Morning show called it “terminally lousy), but if you have enjoyed the series of movies, you’ll most likely enjoy this one.

Starting on the eve of what should be the final battle against Skynet, TG brings us resistance leader John Connor (Jason Clarke), with his battle-scarred face, now the mentor to an adult Kyle Reese (Jai Courtney, The Divergent Series). Connor brings his forces to a work camp, having learned that Skynet has built their “ultimate weapon” here – the time machine that launched the original Terminator to kill his mother, Sarah (Emilia Clarke). 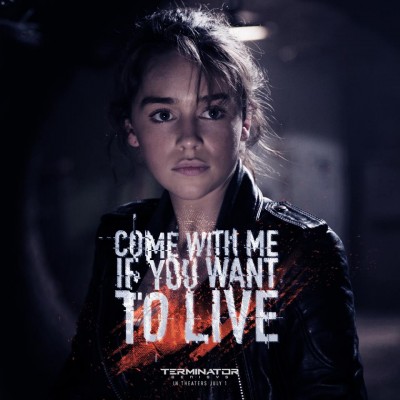 They are just minutes too late to prevent T1 (as I’ll call the original Arnold-face Terminator), and John says that someone will have to go back to save Sarah. Kyle, of course, volunteers – from everything he’s learned about her from John over the years, he’s already fallen in love, he believes. And of course, from the original movie, we know that Kyle is actually John’s father, but at the start of TG – and through most of it – he doesn’t know that. But as Kyle is hurled back in time, a Skynet-created human/machine hybrid (Matt Smith, Doctor Who‘s 11th Doctor, who is now billing himself as Matthew Smith) attacks John Connor.

I watched the original film this week, preparing to review the new film, and if it’s been a while, I strongly suggest you do the same. TG starts at the point where T1 arrives in the past, and does a great job reproducing scenes from the original film – the punks at the observatory, the bum in the alley, the clothing store that naked Kyle races through. So T1 arrives and is confronted by – himself! An older-looking version of T1 shows up, saying, “I’ve been waiting for you.” Here’s the first of the timeline skews in this film – at some point, another Sarah-protecting Terminator (another version of the terminator sent in the second film) arrived to protect a 9-year-old Sarah from yet another killer T, who murders her parents. Old T raises Sarah, preparing her for what her life will become – by the time Kyle arrives to save her from T1, she already knows that she will bear the child that will become mankind’s saviour, knows who that child’s father will be, knows how to protect herself, has created bunkers and plans for defeating the Ts, and calls Old T “Pops.”

Pops is a little different – Sarah explains to Kyle that she’s been trying to help him fit into society. His machine “smile” is slightly frightening, but really funny. Having had no other parental figure, Sarah has become very attached to Pops, and as much as a machine can, he is attached to her, beyond his programming to protect her. This was a great vehicle for Schwarzenegger’s return to film – I’ve never been sure whether I’m a fan or not; I’ve liked a lot of the films he’s been in, without really liking his performance, but Terminator seems to fit him. Even the still-strong Austrian accent works.

And the “cop” Terminator from the second film shows up as well – of course – and so Sarah, Kyle and Pops are fighting several enemies at once. But this time, they’ve got the advantage – Sarah and Pops know what’s coming, and have had years to prepare for this moment – and for the years while John is growing up.

So, you’ve got all that? Let’s count the time travelers in TG – we’ve got T1, we’ve got the bad T from the second film, we’ve got Pops, and Kyle, we hear about the killer T who attacks child Sarah’s family…. and Kyle, and of course, in another twist, John Connor himself.

JK Simmons played a great supporting role here – as a former cop who had been supposedly saved by Kyle Reese in the original events, he’s been tracking the events since that point in his life, 30 years before, and shows up when he starts hearing of events that sound suspicious. Of course, nobody believes him – he’s a old drunk guy with delusions, right?

This film has some terrific visual effects. The CGI used to reproduce a young Arnold’s face on T1 was terrific (a body double was used). The bus flipping over and over on the Golden Gate bridge was spectacular – we’ve seen huge car crashes done on this landmark bridge, but I don’t recall a school bus – or anything else of that size – going end over teakettle on top of a traffic jam. My favorite effect was the John Connor man/machine hybrid being splintered into the MRI.

TG is the first in a planned 3-film arc, with the next films to follow in 2017 and 2018. There’s a rumor of another TV series being developed, tentatively called “Terminator: Project Skynet,”

If you’re a Terminator purist, this may be heresy for you, but I thought it was a lot of fun – exciting battles, great effects, and I always enjoy when something is pulled apart and put together differently. I’m not looking to dissect movies – I really just want to know that when I spend my money to sit in a movie theater, that I’ll have fun. And that’s what TG was, a lot of fun.

Oh! And when some big company announces a comprehensive operating system for your phone, your computer, your entire life – don’t go out and buy it. What? You already have? Uh oh.