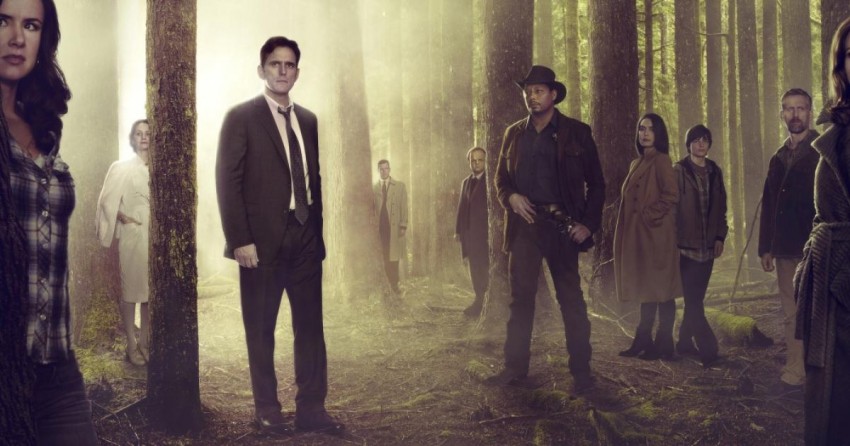 Boy howdy! Things are obviously falling apart in Wayward Pines. Pilcher wants peace via keeping the people of the town in the dark. Ethan wants peace via the truth, that everything should be revealed to the residents. The teacher wants the kids to rule the world, and Kate and her cronies wanted to blow up the damn fence! Geesh, what are they all to do?

Pilcher has become so paranoid, after the bombing and enlists Pam to see if any of their workers can be trusted. Pam interviews many and finds one who has not been reporting all he sees on the creppy cameras. It is not because this man is involved in any wrong doing, it is just because he thinks its kinda creepy to see people’s privacy violated. Pam lies to Pilcher about this and the young man is taken away and locked up. 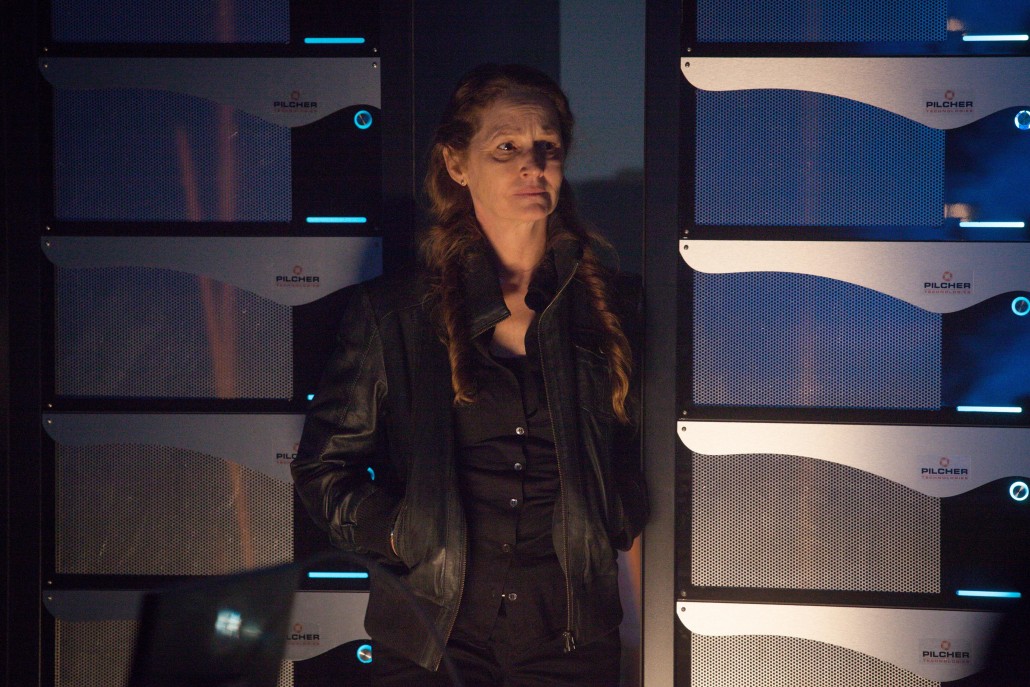 Pam is all too aware the her brother is simply losing it. She is becoming more and more concerned about the outcome. What will Pilcher do if he doesn’t have it his way? Will he snap or will he be taken down off his pedestal? 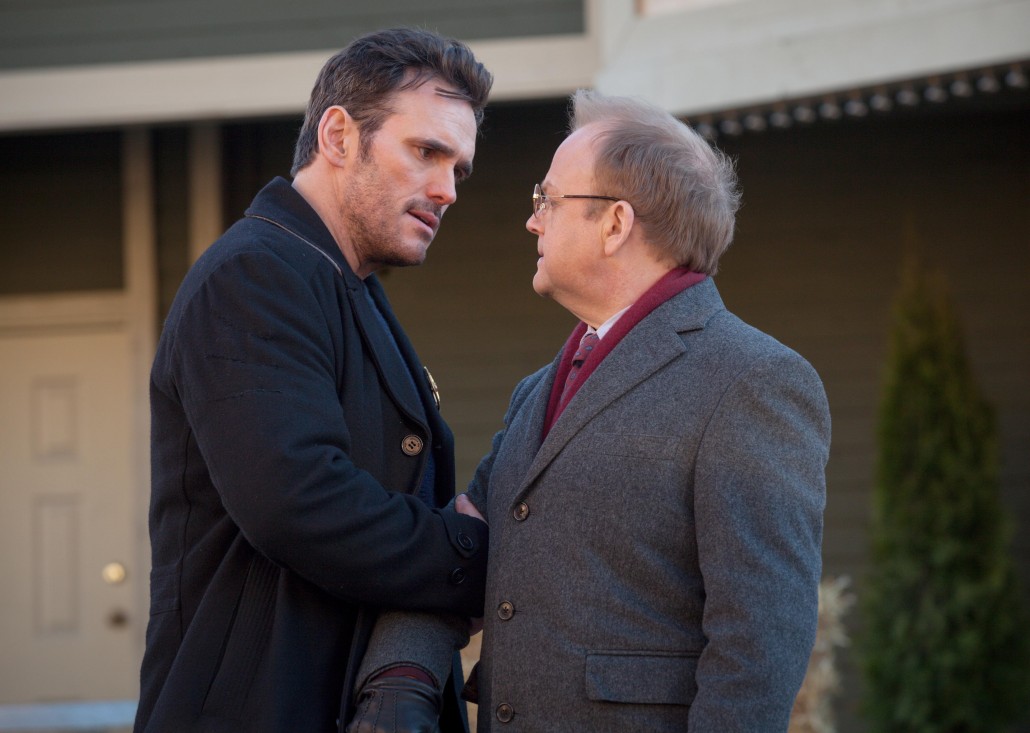 And what about the teacher? Has she brainwashed the children of Pine’s to believe in the all holy Pilcher and his wishes for a better future? Do you think this will have a backlash in days to come? Will the meek really inherit the earth? 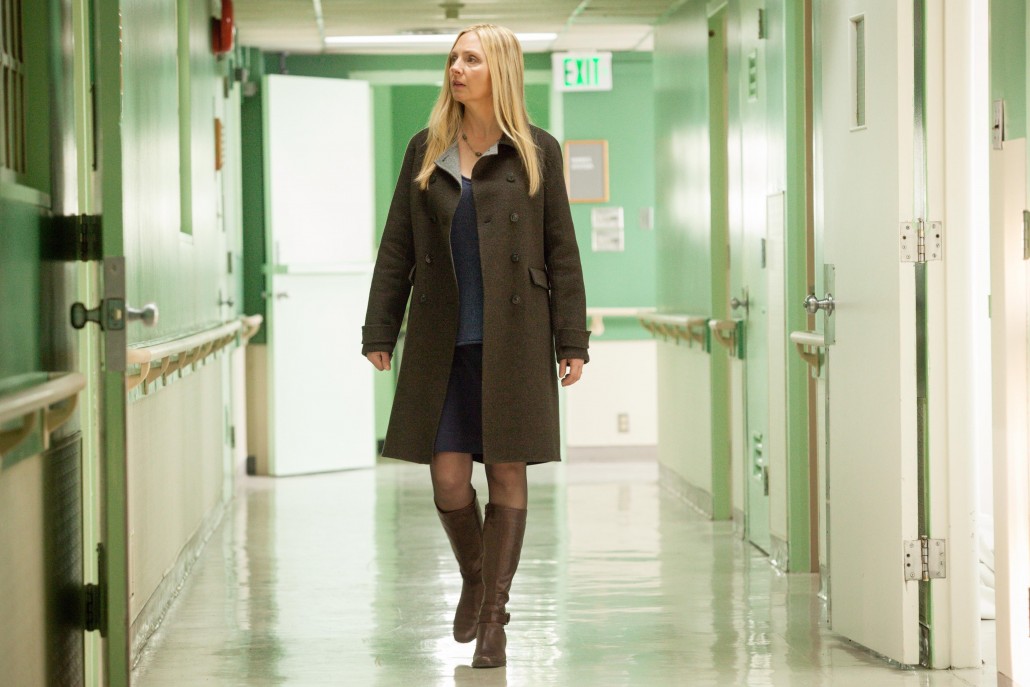 The Executive Producer of Wayward Pines, Chad Hodge, says it best in his guest blog at EW.

“The title of this eighth episode of Wayward Pines is “The Friendliest Place on Earth.” Not a bad title, but we also could have called it “All the World’s a Stage.” Now that you’ve seen both sides, isn’t that what Wayward Pines really is? It’s one massive piece of theater. Think about it. The town is the stage and the residents are the actors. The superstructure is the backstage and its employees are the stage crew. David Pilcher (Toby Jones) is the director, his sister Pam (Melissa Leo) is the stage manager, and together they have created the world’s largest (and now only) piece of immersive theater. 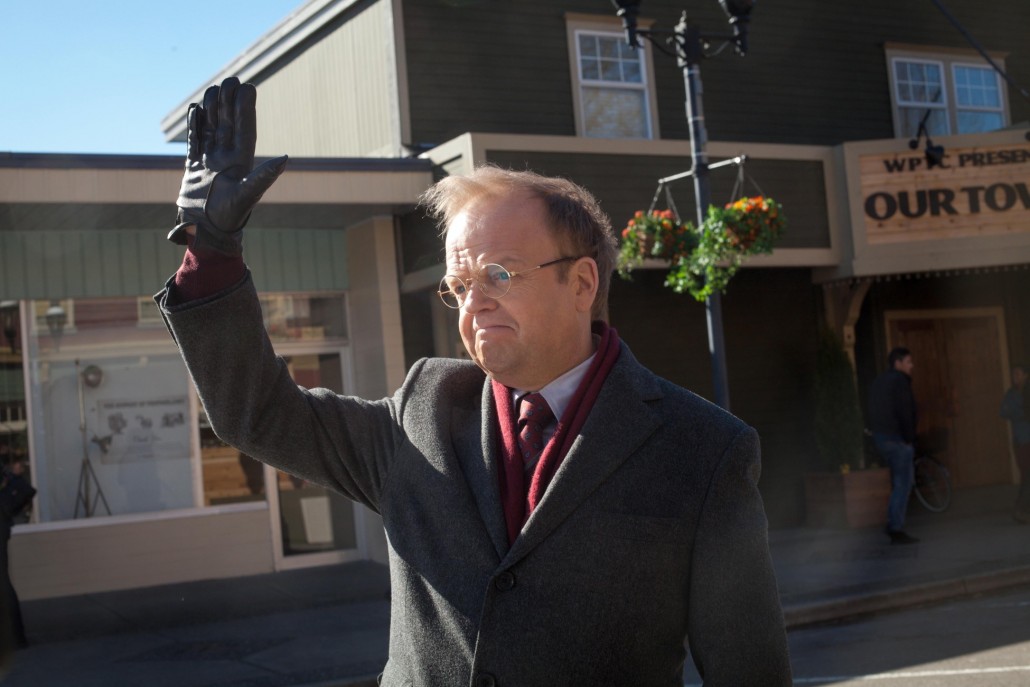 Ever been to a Renaissance Faire? You know how everybody wears tunics and chain mail and does their best Cockney accent between bites of turkey legs? It’s an immersive world with shops and shows and when you run into Jill from accounting she’s in a purple rope dress with cleavage down to her navel screaming “The Queen is coming! The Queen is coming!” And she grabs your hand and you high-tail it through the crowd to get a glimpse of Her Majesty.

The biggest structure on Main Street is the theater, which is a nod to the idea that the town is the stage and this is all one big performance. When the residents are “on” and the microphones are live they have to say their lines. Kate and Harold (Carla Gugino and Reed Diamond) play the parts of shopkeeper and toymaker. Arlene (Siobhan Fallon Hogan) plays the part of the sheriff’s secretary. Theresa (Shannyn Sossamon) is trying to play the part of a realtor. When they’re off-stage they whisper to each other about where to go next or what they really think of that other actor they just had to kiss.

There’s something kind of fun about it, right? If I could buy a ticket to immerse in the town of Wayward Pines for a day, knowing I could leave, I absolutely would. Who doesn’t love dressing up and pretending to be someone else for a while? I think I’d want to work at Pine Cones & Candy, the sweets and ice cream shop. Maybe Beverly (Juliette Lewis) would come in and we could freestyle-improv about the ’90s and the importance of Salt-N-Pepa (in whispers of course).

The best actors find a real truth with the character they’re embodying. Same goes for the resident actors in the production of Wayward Pines. I think this is well-exemplified in one of the flashbacks in this episode. It’s the scene where Kate is in a therapy session with Dr. Jenkins. Obviously “Dr. Jenkins” is David Pilcher’s in-town persona. Behind that role he’s also the director of the entire production, which Kate doesn’t yet know. Kate is also playing two roles: 1) the woman who has assimilated and found a kind of happiness with her husband and her toy store and her Prozac prescription; and 2) the leader of an underground group who will stop at nothing to get out, who crumples that prescription in her purse. What I love most about Carla Gugino’s performance here is that we feel a real degree of truth to Role #1.

Check out their dialogue in this scene. And by “scene” I don’t mean a scene in this TV show. Think of it as a scene within the big ongoing play that is their reality in Wayward Pines.

Kate: In my life before I was always running… searching… fighting. But the questions I had then are no different than the questions I have now. Why are we here? Why do we breathe in and out? Is there a God? But if I’m honest, in my old life there was also a great degree of fear. There was terror everywhere. It’s what my job as an agent was all about—and I won’t lie, I fed on that adrenaline. But here… I don’t know, it’s like I’ve been forced to live one moment at a time. I’m still asking all the same questions, but the answers are less urgent now. Maybe because I feel safer.
Dr. Jenkins: Have you and Harold thought any more about children?
Kate: [Smiles] We have been talking about it, yes.
Dr. Jenkins: You’d make a great mom, Kate.

They’re both acting. But they’re both telling truths. Which is why the play works.

Behind the scenes in the superstructure, the crew is very proud of the production they’ve mounted. They get to watch it on the cameras like a never-ending reality show. “I love it when they let something juicy slip,” says one of the surveillance techs. Big Brother, anyone?

Is it possible to pretend forever? No. It’s not. That’s why people get divorced. Or quit a job. Or come out of the closet. Or drive a truck through a fence.

Lucky for us, we don’t really live in Wayward Pines. Or do we? Don’t we mostly move through our lives playing different roles?

The greatest playwright of all time said it: “All the world’s a stage. And all the men and women merely players.” In Wayward Pines, that is quite literally the truth.”

I have seen the next episode. It will make you think. What are we afraid of? Is it the abbies or the residents of the town that we need to fear the most? Tune in and watch tonight. There are only 2 episodes left to the series. All in all, I think it has been a great show.Full of drama, secrecy and great characters. There are 2 more books written in this series by Blake Crouch. This series was only slated for 10 episodes. But who knows, maybe we will see a 2nd and 3rd season somewhere. I hope so. I would like a finality to the story if one isn’t given at the end of the last episode. How about you? Tell me what you think.

Enjoy this preview of Ep 9 “A Reckoning”

See photos and videos on Instagram by following @Wayward Pines.