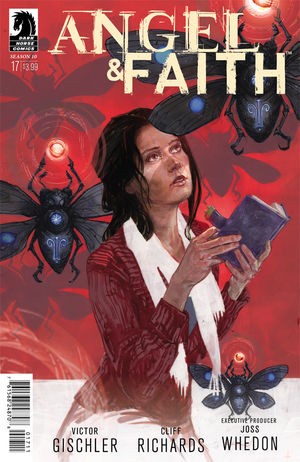 With Angel playing the 5th wheel in over in Buffyland, Faith and Fred are 21jump-streeting a Catholic school in London. This review contains spoilers.

Well actually before you point it out, yes Fred is a lunch lady and Faith is a gym teacher, none of them have donned a schoolgirl’s uniform thankfully. Anywhoo, Faith is skyping with Angel telling him about the naughty school girls, picking on Mary and how one bully is now dead. Angel still believes that the school killings has some connection to Archeus. If you haven’t followed the plot, Archeus is the vampy demon that sired the Master. The Master then sired Darla, that made Angelus her partner in crime, Angel then made loony Drusilla, who then finally bit the tasty neck of William the Bloody. Alright, history lesson over, they are all connected to the great granddaddy Archeus, hence the dreaming and him being able to mind control them.

Faith doesn’t seem to be too interested in this really, but is more amused by Buffy and Spike being an item again. And quite frankly aren’t we all? Pardon me whilst I daydream a bit….

So Faith heads back to the school where she finds Mary, even though she was meant to be hiding at home. Mary is being bothered by the vampire school girls that wants her to join their club. Faith intervenes, which makes the vamps very annoyed. So angry that the at the end of the issue attack Faith trying to figure out what Mary and her were talking about.

Mary on the other hand is meeting up with her former bully’s boyfriend, to let him know that his girlfriend is indeed dead. Oh he knows, as he happens to be in the fangclub too. A rather special Catholic school fangs club ruled by a certain Drusilla….ding ding connection to Archeus made!

Let’s talk about the artwork a bit shall we. It is just so lovely, the details are fantastic, the faces and close up expressions are wonderful. It is quite different from Buffy season 10 Rebekah Isaacs artist who was in charge of the last season of Angel & Faiths artwork (and my favorite I’ll have to add) but I think Cliff Richards is making an absolute stellar job, it is pure pleasure to look at.

The story line is moving forward as well, I think it will be better when Angel comes back as I do like the dynamics between him and Faith and him and Fred, but saying that the combo or hard-ass Faith and brainy Fred are quite enjoyable too and now with the addition of Drusilla, we should have a trio of very interesting brunettes!