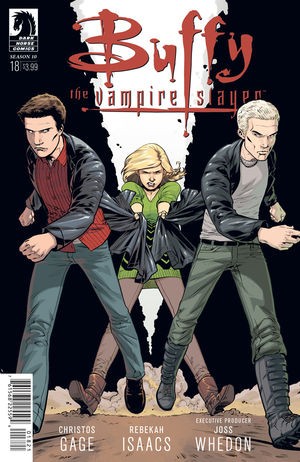 Angel and Spike are hacking each other to pieces whilst Buffy is trying to kill Archeus. The newest issue of Buffy season 10 is out, this review contains spoilers.

Lets recap; Archeus is an evil vampy-uber-demon who was the thing that sired the Master, The Master then went on to make Darla, and the rest you hopefully knows. Archeus is therefor Angels and Spikes great grand daddy so to say, hence he can control them of sorts, but their souls do get in the way, as Spike managed to break free from his control. Archeus is using an artifact that makes our world and the demon world connected. The Scoobies are trying to take the artifact a part whilst Buffy, Angel and Spike are battle Archues. We left off where Archeus had just gotten Angel to stab Spike. Luckily Spike doesn’t die (phew) and stabs Angel right back instead. Whilst the boys bicker and play with swords, Buffy has her hands full. She pleas with Spike to figure out a way to snap Angel out of it, which he eventually does, by comparing Archeus to Angels own dad, this makes Angel very cross and back on track. The scoobies put the whammy on the artifact with magic, Giles firing fireballs like a little Harry Potter look-a-like. When Angel crawls out under Archues claws, the trio of warriors manages to fight Archues off as Willow and co breaks the artifact. Yay and hurrah right?

Actually, no, it seems just as the gang was getting ready to celebrate the win, D’hoffryn pops up and poops all over the party. The artifact remains were stolen by demons and is now in the hands of the Mistress, the Soul Glutton and the Sculptor from recent adventures past. Xander wonders if they can not just use the Vampyr book of magic say-so and write it so that the artifact can’t work, but as things never can be simple, D’hoffryn tells them that won’t work as that artifact is from a different dimension. If I write the word artifact one more time I think I might have to move into warehouse 13…

Anyway, the gang realizes the fighting is far from over and that they better give heads up to other people that things will get worse. Angel will investigate from London and goes to leave. Before he sets off he has words with Spike, he says thank you for helping him and tells him to be good to Buffy. As he heads out with Willow she compliments him on how he handled the Spike situation. Angel tells her that he isn’t worried, Spuffy won’t last, Spike will fixate on Buffy, thinking she can save him and when she can’t he will fall into a pool of self pity.Harsh but true he says and it ends.

So that’s that, cross over-over. I think it went ok, I was worried Angel would come in and break Spuffy right up. But he didn’t and I am hoping his parting words won’t be the truth either. If anybody likes to relax in a deep pool of self pity it is Angel himself, so I am not so sure about his parting words of wisdom. I am a realist so I do know that Spuffy won’t last, Whedonverse happiness is shortlived after all, but I am not just ready for it to end just yet. .