Dark Horse’s An Evening with ‘The Paybacks’ Tour 2015

Dark Horse’s An Evening with ‘The Paybacks’ Tour 2015 is going to be one heck of a time! The Paybacks promises to be a fun and wild ride with unicorns, superheroes, and more! Eliot Rahal, a professional stand-up comedian, is going to show his comedy chops during this tour and Donny Cates has some great stories to share, also there will be some awesome giveaways! If there’s a date near you, check it out! 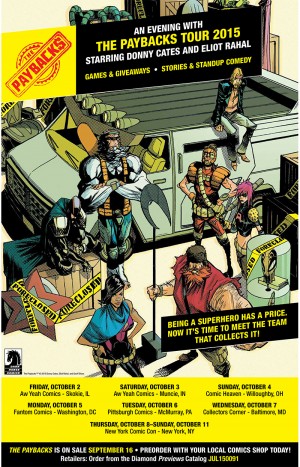 In honor of the occasion, writers Donny Cates (Buzzkill, The Ghost Fleet) and Eliot Rahal (Heavy Metal, Dark Horse Presents) will hit the road on their way to New York Comic Con with their variety show, “An Evening with the Paybacks,” sponsored by Dark Horse Comics!

Each night from October 2 to October 7, Cates and Rahal will visit one of six select retail stores for a signing followed by an evening of storytelling, games, giveaways, and standup comedy.

If you are near any of these locations, stop by and party with The Paybacks!

For more Dark Horse and The Paybacks news be sure to check back!