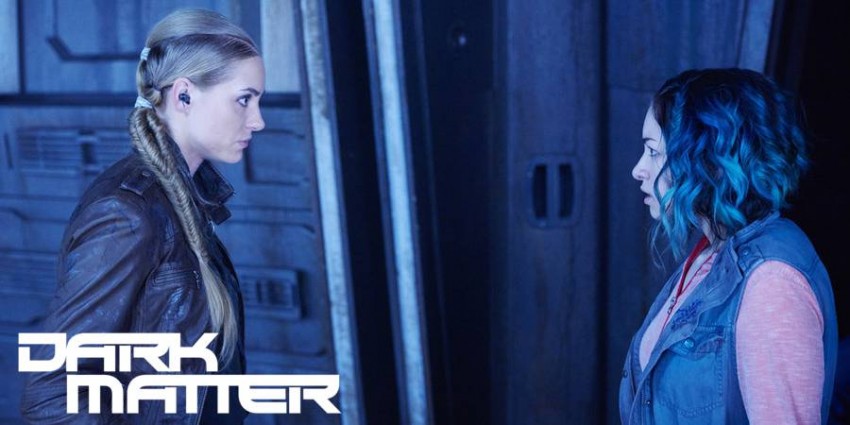 Dark Matter Episode 11 Review – Out with a Bang

Dark Matter didn’t pick up where it left off last week. No, it picked up in the moments before Two was spaced, making us watch the ordeal all over again. That was kinda mean, but it was kinda good, too. After all, it was the biggest WTF ending in a show that’s quickly become known for those huge cliffhangery endings.

Wexler’s Weasels lock the surviving five in the vault behind the Big Damned Door and it’s Five who comes to the rescue again. She’s got a knife in her boot that they use to cut their restraints. Papa Six gets shut down with a word and a look when he asked this:

“Since when did you start carrying a knife?” – Six
“Really?” – Five

Taking Jace Corso’s face keeps landing One in hot water. First, he had to deal with Original Recipe Jace, who tied him to a chair. Now, Wexler thinks he’s the real Jace and he heard a rumor that Corso has a cache of goods worth millions. Two problems: One, he’s not the real Jace and even if he was his memory is wiped so he wouldn’t remember, anyway. And, two, Wexler is threatening to torture (and worse) Five until he gives up the goods. She doesn’t have a bounty on her head, so she’s of no value to the dirtbags.

“You know, the android once told me that when all this caught up with us, I’d be the lucky one … because I wasn’t one of the original crew. It’s kinda funny how it turned out to be the exact opposite.”

They don’t have time to even touch Five when a problem with the FTL drive pops up. The only person able to figure out the problem is the kid, so this at least buys her some time. Hmm … it’s that same coupling issue that Android had to fix a while back. Someone has to go outside and fix it – Vons volunteers.

The airlock gets manually pressurized and inside is a not-at-all-dead Two! How did she do it? Even she doesn’t know, but time in space hasn’t slowed her down. After turning Vons into space junk, she breaks Tash’s neck and rescues Five, telling her to hide in the air vents.

Wexler really is a weaselly jerk. He was planning on selling the mystery device to the Volkov-Rusi Corporation, screwing Mikkei in the process. Where Two only had Wexler and Cain left to take out, she now has about a half-dozen armed and armored Volkov security forces to contend with. She hardly breaks a sweat.

The boys are still in the sealed vault, beginning to suffer the effects of hypoxia, when they discuss what they have to lose. One gives a funny and rallying speech about how they need to band together to kick butt when the door opens. It’s another bonding moment and we see again that these people are at their best together when things are at their worst. Even Four laughs a little. Yeah … I know.

“You see, you have never been put in the position where you hate someone so much that you just want to kill them.” – Three
“I wouldn’t be so sure about that.” – One

Now left with only Wexler and Cain to deal with, Two is caught at gunpoint by the latter. Just as he’s about to see if she can survive being shot in the head, Cain is shot about nineteen times by Five who used the pistol she’d smuggled aboard the Raza.

This is how many times Five has proven she can not only take care of herself, but the others, too? In this episode alone, she unwittingly helped take out some of Wexler’s people by checking on the FTL drive, provided a knife to cut their bound hands, and saved Two from a bullet by providing a hailstorm of her own. It’s time the others started treating her like the capable young woman she is. Five’s no mercenary, nor is she prone to aggressive behavior, but she can hold her own when the chips are down.

The badass ladies of the Raza catch Wexler on the bridge. When Volkov-Rusi hears Two’s voice over the bridge communications device, they immediately bug out via FTL. That seemed a little odd to me. Sure, it’s been established that the Raza, being heavily armed, small, and maneuverable could possibly take out one of the megacorps’ giant ships, but to just leave without trying to negotiate or lobby a hollow threat seemed suspicious to me. You know if it was Truffault she wouldn’t have backed down so quickly and quietly.

Since turnabout has always been fair play, Two puts Wexler in the airlock and threatens to space him if he doesn’t give up the new code for the Big Damned Door. Our boys are slowly suffocating in there, so we’ve gotta be quick. Two tells him that she’ll spare his life if he gives up the code. Wexler’s wary, believing she’ll space him no matter what, but she convinces him she’s not a killer like him and he ‘fesses up.

Five confirms the code is valid by opening the door. Our boys are standing at the not-so-ready to fight the aggressors, but in their weakened state they can hardly fight gravity.

Back at the airlock, Wexler’s expecting Two to keep her end of the bargain, but this is not a day to make deals with Boss Lady. She looks him straight in the eye while she pushes the button that opens the pod bay doors. Where’s HAL when you need him, eh, Wexler?

So, exactly what is Two? We finally get an all too brief bit of Android when she does a scan on their commander. What she finds is that Two is an “advanced biosynthetic organism” with a whole herd of repair nanites running around inside of her fixing any damage she might incur.

Two is basically a designer human. She was assembled from custom-made organs and parts, but she’s still bleeds. Only she’s got those nanites to make her practically immortal. It’s kind of ironic that the one person immune to the faulty immortality virus was the one person designed to never get harmed. Technically, she wasn’t immune – she was infected and the nanites destroyed all vestiges of the virus before it could do any harm. Still, same outcome.

It’s not all good news, though. Android explains that the technology used to create her is outlawed, so if Two’s secret were known she’d be hunted down and destroyed. You just know somebody already knows …

Keeping their end of the bargain, the Raza crew deliver the mystery device to a Mikkei lab located on the surface of a beautiful planet. This shot is my second favorite of the episode. I just love the VFX work on this show – most especially the gorgeous space scenery.

Down in the lab, the device is in a chamber producing some weird energy pulses. As the Marauder is returning, the device’s energy field becomes unstable, causing the planet’s gravity to fluctuate wildly. Android states they need to haul ass ASAP and just as they’re putting pedal to metal, the entire freaking planet explodes!

Okay, THIS is my favorite scene and I’d say it pretty much tops the list of WTF moments. It’s not as personal as when we watched Two fly out into the vacuum of space, but c’mon, a whole planet just went poof.