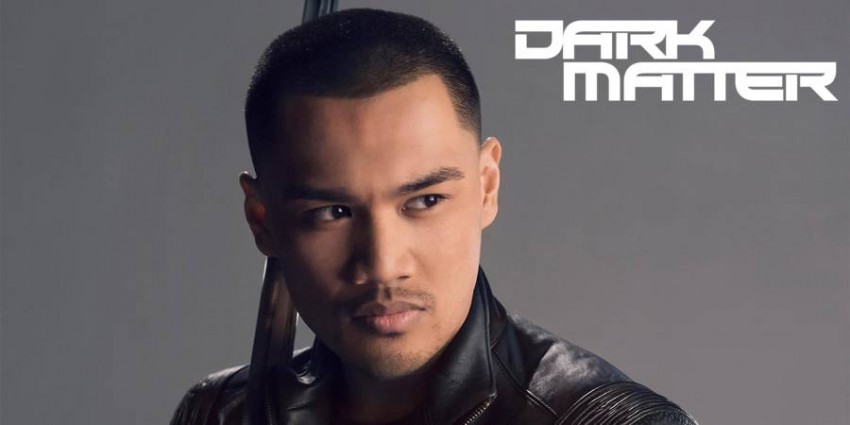 If you’re in space and you want to clear a room full of bad guys in a hurry, the first person you probably think of is Dark Matter’s Four. Serious, intense, and a man of few words, he may not be much for conversation, but thankfully his alter-ego Alex Mallari, Jr. is a much more gregarious person. He happily agreed to spend some time answering our questions, which I’m more than happy to share with you.

We talked naming katanas, more backstory for Four, how to stab someone on TV, and Russia, to name a few subjects. Please read on and enjoy the conversation. And please check back soon, we’re going to have more Dark Matter interviews coming up shortly! We’ll be talking with Joseph Mallozzi, Melissa O’Neil, Jodelle Ferland, Roger Cross, and chatting even more with Alex Mallari, Jr. If you have any questions you’d like answered, leave them in the comments section below and we’ll try our best to get you some information. 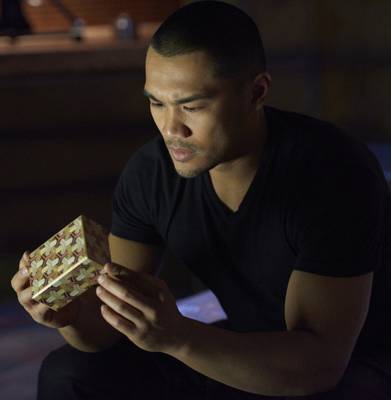 TIBS: Joe recently said in a post-show Periscope session that you named your sword “Monday”, but he didn’t remember why you’d given it that name. Can you please give us the juicy details?

AMJr: Why did I name my katana Monday? Quite simple, nobody likes it when Monday comes around, lol.

TIBS: Four is pretty damned stone cold when he wants to be. His family past is enough of an explanation for that, but is there anything else driving his rage?

AMJr: What we’ve learned about Four is merely the tip of the iceberg. There is surely more to him than his family feud and we’ll be introduced to a little more of him and his backstory in the next few episodes of season one. Until I read the scripts for the final few episodes while filming season one, even I thought it was all about the family feud and the character choices that I’ve made. But then Joe hit me with some extra baggage that makes Four’s story that much more interesting and will surely leave the viewers wanting more!

TIBS: Will we see more about the Ishida Empire or will we have to wait for season two to find out if Four ever gets to meet with his brother? (Fingers and toes crossed for a season two, by the way.)

AMJr: Arguably, Four’s backstory is the most prominent one amongst the crew. It was introduced in the pilot episode, was given a little more detail in episode six, and then got a little more in depth in episode nine. Did I mention there’s still more to be exposed of him in the next few episodes? What I’m trying to say is, there’s no way we open that book and not get to the bottom of it. When we get to see that is an answer we’re all going to have to wait for.

TIBS: When you film the scenes where you run someone through with your sword, what are you actually holding and how is the effect created?

AMJr: Typically, when we film anything with the katana we have three things on deck: the “really” which is a dulled metal version, the wooden one that I use for the fight sequences, and then the stub which is the handle of the sword that we use for stabs and slices. So basically the actions and reactions are timed by myself and the other actor; the rest is up to our guys in post to do all the magic.

TIBS: What did you like the most about filming Dark Matter?

AMJr: This is always a tough question to answer because I loved it all. But if I had to choose something, I would have to say that it was the environment that we had on our sets. The cast and crew just seemed to be in sync, everyone always had a positive and upbeat energy. What was super fun was the conversations we would all have after a new script would come out. An hour or two after we’d receive the new script, you couldn’t turn a corner on set without running into someone who either had new questions or new theories about the storyline.

TIBS: If I recall correctly, you said you lost 30 pounds over the course of filming Dark Matter. Was this from intense workouts for the role or was there another reason entirely?

AMJr: After episode three, I decided to go vegan on top of the intense workout regimen and schedule I had for myself. That said, it was for the character. I have a vision of how I want Four to look and I also want to be more athletic so that I can do more in the fight and training sequences.

TIBS: You recently returned from Moscow where you were filming a new series. Can you say anything about it? If not, when can fans expect to hear more?

AMJr: Unfortunately, I can’t say anything about it yet. But you know me, I’ll be sure to post about it once I’m given the thumbs up to do so.

TIBS: Did you enjoy spending time in Russia? Was it your first time there?

AMJr: It was my first time in Russia and it was an unforgettable experience. The architecture over there is beautiful!

TIBS: If you couldn’t be an actor, what would you like to do?

AMJr: I would be a DJ. I mean, I’m a DJ already, but I would’ve taken that seriously enough to bring it to another level, know what I mean? I love music and it’s such an amazing feeling when you get lost DJ’ing and the crowd is right there with you getting lost in your mix – I absolutely love it! No feeling like it.

TIBS: Can you tell us something about yourself we might not already know?

AMJr: Contrary to Four, I’m a goof and am childish for the most part. I love to laugh, I’m a terrible singer but I sing all the time anyways, I dance when I hear music, I want to be a voice for the animals, I love spontaneity, I’m a gentleman, and I’m a dreamer.