The Expanse at SDCC 2015: Shohreh Aghdashloo and Dominique Tipper 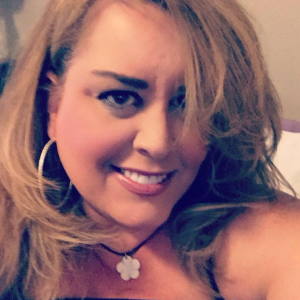 You know who I most want to have tea with at some point? Shohreh Aghdashloo (House of Sand and Fog, X-Men: The Last Stand) and Dominique Tipper (Vampire Academy, Fast Girls). What a delightful pair of thespians and thoughtful and sweet human beings they seem to be. I don’t know about you, but those are exactly the kinds of people I like to drink tea with. Or, I don’t know, maybe wine if it’s been one of THOSE kinds of days. Whatever. My point is Shohreh and Dominique were both incredibly lovely when Three If By Space got to sit down and talk to them recently at Comic-Con about their roles in one of SyFy’s most anticipated new series, The Expanse, coming this December.

First, Let’s talk about Shohreh Aghdashloo, who plays Chrisjen Avasarala in the series. Avasarala is a savvy politician with the offical title of Assistant Undersecretary of the Executive Administration (to the United Nations). What most intrigued me about our interview with Shohreh wasn’t just her lovely voice and expressive face, but also how she really connected why we should all be excited about this series. I’ve heard over and over that The Expanse will not just be a Sci-Fi show about space; rather, it will be a Sci-Fi show about our humanity and all the complexities that go with it, and outer space will be its backdrop. 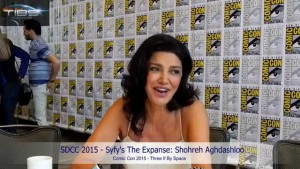 In our interview, Shohreh pretty much confirmed this when she spoke about how very timely and relevant the issues featured in the show will be. She related a story about a conversation that her character will have with another character, a powerful politician from Mars. In the conversation, Avasarala’s friend notes, “We had a garden, and we turned it into a rock.” And then goes on to point out the people on Mars inherited a rock and are turning it into a garden.

Later, when Shohreh returned to her Los Angeles home, she tells a story about receiving a letter from her Homeowner’s Association telling her she needed to dispose of all of her plants; the water restrictions would kill them. She did, and when she finished she says she sat and looked around at her new, rocky garden and realized: this is happening right now. We have a garden, and we are all turning it into a rock.

I’m so sad Shohreh had to get rid of all her plants! But OMG, do I love it when Art becomes Life and Life becomes Art. It’s my whole reason for existence! Shohreh emphasized that The Expanse will come very close to the truth of what it means to be a human. So if you love stories about what makes us tick like I do, listen to me. This show has our names written all over it; we are about to go on a wild ride not just into outer space and adventure, but also a psychic examination of Soul. Sort of like Soul Train, I’d say. But in outer space. Minus the dancing and ginormous bell bottoms (which I really miss, do you?).

Next, let’s talk about our interview with Dominique Tipper. Dominique stars as Naomi Nagata, the ship’s chief engineer. She talked at length about her character’s arc as well as what it was like creating the world of The Expanse. After hearing what Dominique has to say about her character, I’m stupidly super excited to meet Naomi when the show premieres – Naomi sounds just fabulous. One of those characters you wish could be brought to life for really real. And (because I know you’re wondering) not only would I have tea (or wine or whatever) with Shohreh and Dominique, yes I WOULD invite Naomi Nagata as well. And I would invite her simply based on Dominique’s description of her: intelligent, capable, thoughtful, feminine but someone who can hold her own with anybody in any situation, assertive yet elegant yet hardcore, peaceful yet someone with a dark past which gives her a great tenseness. Those are the best kinds of girlfriends to hang out with, you know.

Dominique describes Naomi as a Belter, someone born on Ceres (the Asteroid Belt), and therefore a person who’s never been exposed to real light, rain, soil, fresh air, and all that. And if you’ve read the books, then you’ll also be familiar with the role the Belters play in the world of The Expanse, which are sort of the working class to the working class kind of people. The colonization of outer space has been built on the backs of the Belters, Dominique told us, and so all kinds of issues will arise because of that.

In addition to piquing my continuing excitement and interest in the world The Expanse will portray, Dominique also revealed to us that we’ll get to see her character evolve, which is just classically good storytelling. She says we’ll get to see Naomi go from a brilliantly flawed character with layers (love those!) who is very closed at the beginning and then later will open up due to the extraordinary circumstances Naomi will be placed in, and all the pressures she’ll be under. Dominique also noted this doesn’t just happen with her own character, but with everyone else’s as well. And! She let us know there are lovely surprises awaiting viewers because of it.

So (of course) we tried to convince Dominique to reveal some of the surprises she alluded to while talking to us, but she was too savvy. Ah well. Guess we’ll have to sit back and watch it all play out in December.

If you haven’t already, please have a look and a listen to both our interviews with Shohreh and Dominique. Bet you’re going to want to have tea (or another relaxing beverage) with them both, too. And after you watch, if you aren’t excited about The Expanse‘s premiere in December? Holy Ceres, I don’t even know what to say to you. But I promise you’re NOT getting any tea invites from me any time soon.

The Expanse will air on the SyFy Channel starting December 2015.

Our interview with writer Mark Fergus

Our interview with producer Naren Shankar

You can also share this article if you think it rocks. Use our social share buttons found both on the left and at the top.

Or follow me (@atlanta_amy) for all your The Expanse news and reviews.