Dominion: Ep. 10 Review, House of Sacrifice and a CONTEST!

Today – some quick thoughts on Episode 10, then on to a contest. If you want a complete wrap-up of this (or any other) episode, the photo recaps on syfy.com/Dominion (under the photos tab) are very funny and well done.

So Michael is, what, telepathically back in Mallory? Greeted by the man who told Noma to “bring Alex east,” he tries to figure out what he’s doing there, and who this guy is.  The Prophet confronts Michael about his deceptive attempt to take on Mallory’s sins, when he didn’t really kill himself. “You broke your promise, Michael. You must die. Or else I’ll put the fire out.” Why has this man, if that’s what he is, been protecting Mallory? And what does he want with Alex – that might be a more straightforward question. Michael makes a deal – with the Devil? – one hand of poker. If Michael wins, he’s off the hook, Mallory is saved, he wakes up; if the Prophet wins, Michael takes the Empyrean steel route. Of course, 20 years in Las Vegas, even in its current state, has to rub off. And nobody’s getting rid of an archangel that easy.

The Prophet asks about Alex – says he heard that the Chosen One can be either the Great Healer or the Great Destroyer. Michael, of course, has faith in his like-a-son –  “Alex is the last pure heart. He will heal.” Have we heard this before? I don’t think so – and since Vaun loves to drop clues, is this a clue to Alex’s future? Michael wins the hand – but when the other man grabs his arm, he realizes that there’s a greater connection. “This isn’t over, is it?” he asks. “Not until you bring the Chosen One to me,” the Prophet responds. And Michael wakes up, frantic to find Alex. Turns out, it may be his older brother Lucifer, the Morningstar – the Devil. 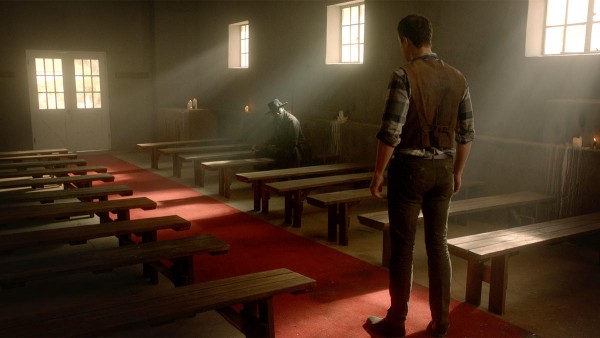 In Vega news, there’s too much coincidence to be believeable! Claire’s two great loves, Alex and Gates, come face to face. Gates doesn’t believe that Alex is “the chosen one,” if there is even such a thing, he tells Claire. The V1s have taken over the city’s nuclear power plant, and they start talking to Ramirez, the V1 holding the nuclear power plant. Right as Gates says that if there’s a problem they won’t be able to take care of it, the warning sirens go off. Uh huh. Very convenient. So now these two macho dudes have to find a way into the power plant and fix the problem that was apparently caused by just mentioning it. And as guys will when they’re both in love with the same woman, they try to out-man each other. “It’s OK, Alex. You can’t always get the girl,” Gates taunts Alex. I kept expecting them to …. you know, measure up… Instead, they sort of stage a fight to fool Ramirez and get control of the plant away from him. It’s only half a fake fight, you get the idea – they’d really probably enjoy whomping each other for dominance.  But they succeed, Alex kills Ramirez, and they’re in control. 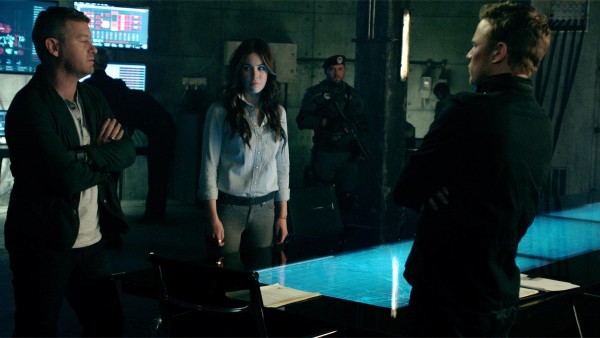 But that’s not the end of it – to fix the reactor issue, someone has to go into the reactor. So Gates sacrifices himself, knowing the radiation will kill him. I’m sorry, I don’t usually feel this way about Dominion, but this is one of the biggest “nuclear reactor plotline” cliches, the noble sacrifice. Was there no other way to do this? Did they need to get rid of Gates for some reason? I thought it was over for Gates last week when Arika poisoned him – apparently this was not a long-term character, but really? The one interesting tidbit in this scene – Gates tells Alex to lead the citizens to a new home, that Vega won’t last much longer. So unless Alex can bring him back (not in this episode obviously), he’s gone…. and Claire suffers another blow. They have a final, heart-rending conversation – about broccoli. And Gates gets the fuel rods lowered, Vega is safe. For now. 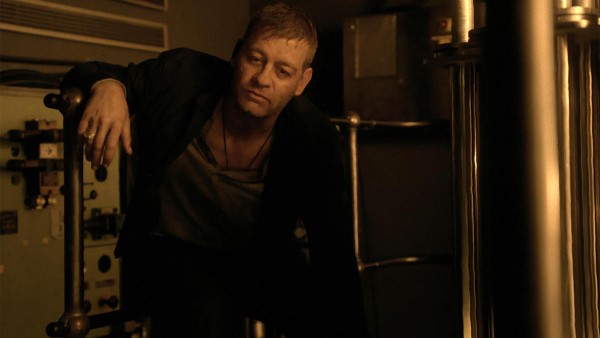 The V1 rebellion has had an effect, though. Lady Reisen talks to the citizens under her care: “Twenty one years ago when the men and women of Vega placed the last brick on the east wall, we knew these walls would protect us. But they’ve also imprisoned us. Pitted us against one another. Our real enemies lie outside these walls. Those who want to destroy our way of life. To silence our humanity. To have all humans die. Citizens of Vega, today I am abolishing the V system.” But are they too late? As Michael tells Alex about Lucifer, and as Claire speaks to the people of Vega, Gabriel drops the amphora, releasing its deadly power. How will they rescue themselves from this grave danger? We’ll find out, next week, on Dominion. 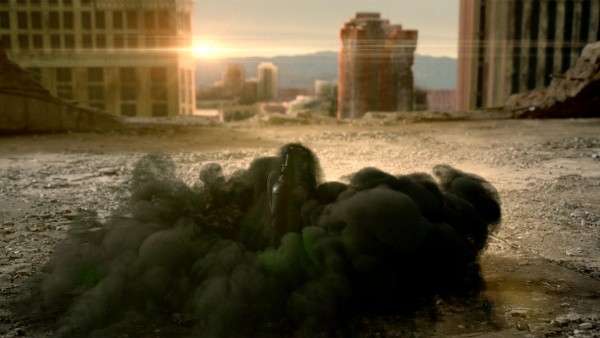 AND NOW, for something completely different:

We’re all making a great effort to get this show renewed for Season 3! Recently, Vaun held an art contest to bring attention to the show. I’d like to hold a #RenewDominion poetry contest! We have 2 great prizes for 2 winners – the Season 2 press kit (minus the DVD of Episode 1 – I’m not allowed to give that away), which includes a character summary and map of the Dominion “world;” and a San Diego ComicCon backpack/tote (2′ x 18″) made especially for Dominion, with angel wings, and SIGNED by Vaun (with his Dominion “V”). 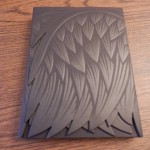 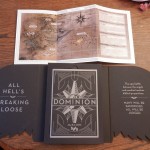 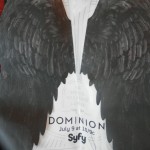 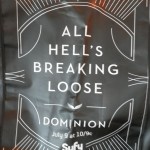 This is how you get in the running:

So start writing! Feel free to ask if you have questions.