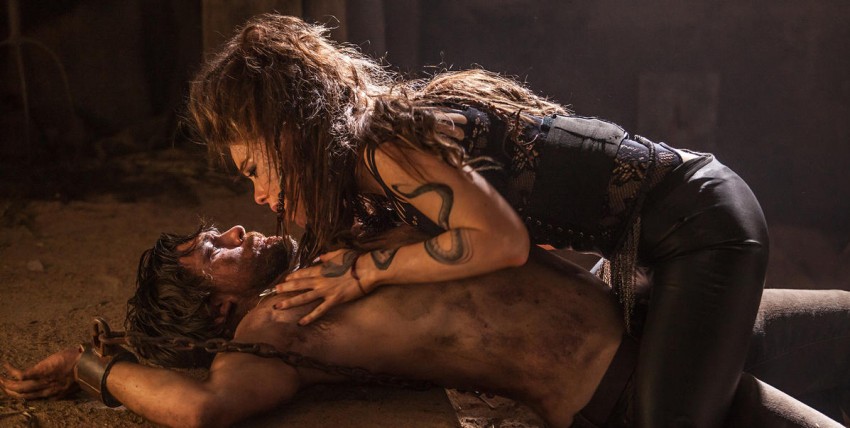 Yea, though I walk through the shadow of the valley of death, I will fear no evil: for thou art with me; thy rod and thy staff, they comfort me.
Psalms 23:4

Truly, Vega has now walked through that valley; but there was no comfort – not from God nor from anyone else. And in fact, it was God’s agents who have created that shadow of death, using one of Heaven’s weapons. Why would God even create such a weapon? Michael says that this has been used for thousands of years by angels – to what end?

Michael tells Alex that the amphora “brings out the darkness inside, it drives you mad with visions to make you hurt yourself or someone else. Some are nightmares and some are dreams, beautiful but fatal, all end in death.” Alex doesn’t see anything, either nightmares or dreams, and Michael isn’t affected yet either, explaining that angels can withstand longer than humans, but that nobody is protected from its effects. “It doesn’t explain you, though.” And as he, Alex and Noma go through the city looking for the amphora, Alex remains unaffected. “Perhaps he won’t be,” Michael tells Noma. “Alex is the last pure heart. There’s no darkness inside you.” This makes me truly wonder – who is Alex? or rather, WHAT is Alex?

The darkness seems to bring out its’ victims’ worst fear – and the visions are all horrifyingly creepy, full of the people (and angels) that were once the most trusted, or the situations that are most frightening. For most of the hallucination victims, they see a perverted version of their tormentor as a really funky, uber-spanked-out 8-ball – William Whele sees Gabriel, with high hair and extremely prominent veins, who had at one time been his idol; he eats a raw rat and then a leather clad, B-52’s-hairdo Claire comes to torment him. And finally, Alex comes to confront him about his claim of being the Chosen One – “your scars are just deformities,” he sneers. “They mean nothing. YOU mean nothing. Your marriage to Claire – means nothing.” This is what William fears most – all of his visions tell him he’s nothing, he’s not worthy of love, he’s an impostor – as David admitted to his own vision, that he couldn’t love William because “it was his crying that got (the rest of his family) killed.” 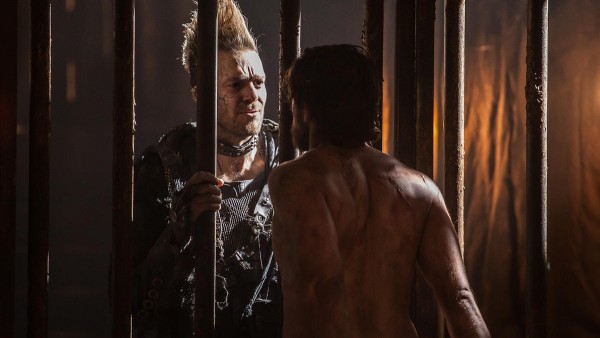 Arika is forced to relive her misuse of the 8-ball Rose, with herself now in the place of the corrupted angel, threatened with her mother’s fate of madness. David Whele sees himself, of course – at once both the person he trusts and fears most. 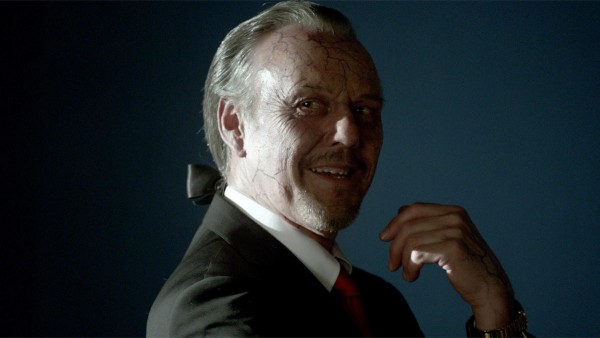 Claire is the only one who has a beautiful dream – at least to start – of her baby and Alex, all three of them in pure white clothing; but it’s marred by small things – a line of blood on the wrist that comes and goes; a cradle that disappears. For her, this is even harder than a nightmare would have been – to have the things she wants most shown to her and then violently ripped away again. And when that’s gone, we see her at the end of the show – what’s happened? She started out the attack in a military control room – and ends up in her apartment, laying on the floor in a pool of blood. 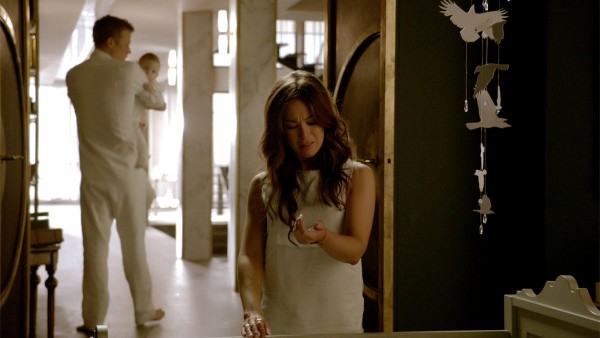 And Alex, Michael and Noma? Noma hears the call of the darkness – she sees blinking lights and feels the power, and it convinces her that her wings have returned and she can fly once more. Of course, she can’t – and has to be literally pulled from the brink by Alex, the only one unaffected. “It’s the darkness. It’s tricking you. Your wings aren’t back.” But as he’s desperately trying to convince her to step off the ledge, he tells her, “I need you. You’re my Nomes. Forever.” Interesting, though – considering that there’s been a bit of a love story between the two of them, he never tells her, even at the critical point, that he loves her. Has seeing Claire reminded him of who his true love is?

Even Michael is affected by the darkness. His biggest fear is obviously losing Alex – he sees Noma stabbing Alex, saying that she should have killed him 25 years ago and that this is the way to end the war. He sees Alex questioning Michael’s love, asking if he only loves him for his markings, and Michael has to admit that at first that was his only interest, but that Alex has grown on him, as he saw the child turn into a good, brave man. “That’s not enough,” nightmare Alex tells Michael, as he puts his gun in his mouth and shoots himself. And still under the influence, Michael finds Noma and Alex on the roof, and rushes to kill her before she can once again kill Alex. “It’s the darkness! It’s not real – none of this is real!” Alex screams at Michael. Alex grabs the amphora – and his markings move, and turn it to dust. “How did you do that?” Michael asks, bewildered. And light returns – and sanity returns, at least to those who have survived. 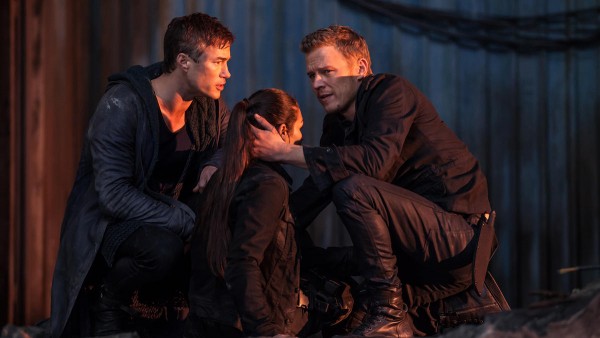 So WHO really is Alex? He has little control over the markings, yet they allow him to do marvelous, miraculous things – evict angels, fight against the strongest weapons his enemies can throw at him. Are there more weapons out there? Michael admits, “The amphora of darkness has served my kind for an eternity. But now I realize it should have been destroyed long ago.” What kind of God creates these weapons, and sanctions his agents to use them? Has He now had a change of heart, and left his Chosen One to find and destroy them? (Learn more about the Seven Wraths of God – the amphora – in this week’s Dominion: Revelations). That will set up an epic battle with Gabriel – who didn’t get the results he wanted from the amphora, but isn’t prepared to give up, either. “It’s time,” Gabriel tells himself. FOR WHAT!?!? Two episodes left! 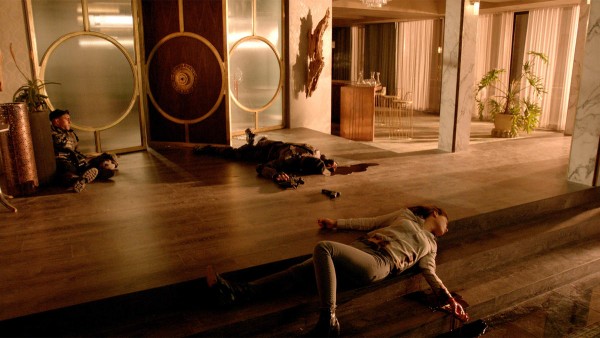 A reminder – my #RenewDominion poetry contest has a few more days to run! Entries will be accepted through Sunday, Sept. 20. Here are the details again:

We’re all making a great effort to get this show renewed for Season 3! Recently, Vaun held an art contest to bring attention to the show. I’d like to hold a #RenewDominion poetry contest! We have 2 great prizes for 2 winners – the Season 2 press kit (minus the DVD of Episode 1 – I’m not allowed to give that away), which includes a character summary and map of the Dominion “world;” and a San Diego ComicCon backpack/tote (2′ x 18″) made especially for Dominion, with angel wings, and SIGNED by Vaun (with his Dominion “V”).

This is how you get in the running:

So start writing! Feel free to ask if you have questions.