Family… can’t live without ’em, can’t kill them more than once. Reeling from the hallucination attacks, Vega is in disarray. Everyone is shaken, afraid, and facing a survival challenge. And then there’s the 8-ball army at the gates…

Right now, I’m going to suggest that if you haven’t seen Legion, the film that Dominion is based on, that you run right over to Amazon (it’s not on Netflix streaming), and buy it and watch. Flashbacks in this episode lead directly into the events in Legion – while seeing Paul Bettany play Michael might be a little disorienting, you’ll quickly get into it (Tom Wisdom’s portrayal of Michael fits in well with Bettany’s. There is one small discrepancy – Michael and Gabriel, in the flashback, discuss the fact that “the child from Raphael’s prophecy” has already been born, before the war has begun, but in Legion, the angels attack before the birth. It’s not a major issue, but be aware).

Seeing the brothers sit at a bar in the flashback (which, ha, since it supposedly takes place in 2016, is actually a present-day flashforward – stay with me here, people), arguing about God’s intentions and the best way to remedy the situation was chilling – we know what’s happened after that. And their relationship hasn’t really improved, not at all helped with Julian’s messing around with Gabriel’s brain. I can’t say that I understand Michael’s refusal to fight with Gabriel – with the Darkness steering him, Gabe means to kill Michael. “We stood together in New Delphi – I haven’t forgotten your sacrifice,” Michael argues, but Gabriel’s messed-up mind believes that Michael is the true enemy. 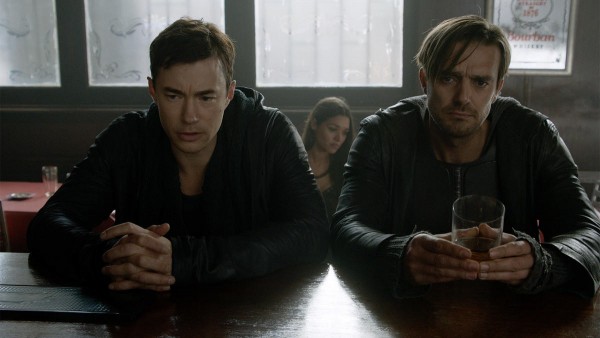 More family tension: David and William. David finds his way to the city’s control room, and is greeted, disbelievingly, by the lone survivor, a soldier named Jerry. “You’re David Whele!” he exclaims. “That’s impossible!” “Apparently, I managed to survive my own hanging, unless this is still a figment of my imagination. God I hope not,” he mutters. David is persuaded to put aside differences with Claire when she finds him there – she seems less than pleased to see him alive. David, finally understanding the depth of the effects of his scheming, tells her, “The day that I left William out in the desert is the day that I destroyed the last piece of hope in myself. I just wasn’t honest enough to lie down and stop breathing. I’m sorry – for everything.” And Claire realizes that killing him would be one too many strikes against her soul, so she allows him to live. She goes off to help Noma and Alex, Whele stays in the control room to help Jerry power up the city’s cannons and then fire them at the 8-balls.

But before they can do much good, screwed-up son William stumbles in. The Darkness has done more damage to William  than to anyone else, it seems – he now believes that he must kill everyone in the city to “cleanse” them. William tells him that Gabriel, Claire and Alex all came to him, and “stripped me of my illusions. I wasn’t saved by God. I wasn’t special. I’m not worthy. It was just a story I made up. That’s OK, It was necesssary. I can still fight evil. The only cure is to kill them all.” And David has to do the hardest thing he has ever done – when he left William in the desert, he was angry and willing to abandon his own child, but now, he understands what his son has gone through and how insane he has become – but he has to kill him to save him from himself and save the city from his insanity. 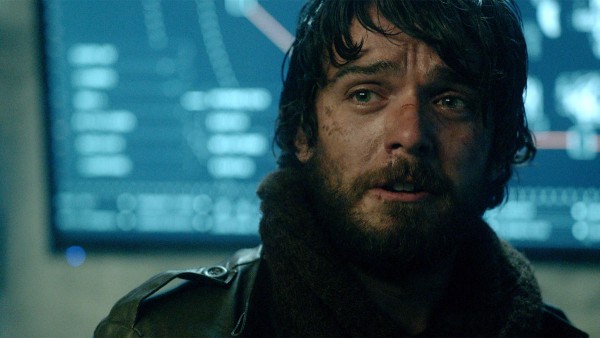 And would-be families have it tough too – two weeks ago, we had a show of masculine bravado between Alex and Gates over Claire; it seems that the women can give it just as good. Noma’s already declared herself to Alex: “If we’re going to die, I’m glad I’m going to go down fighting with the man I love.” And when Claire, Alex and Noma join forces to defend the city, the girls give each other the side-eye; Alex is oblivious and protective toward Claire. Noma truly is an angel, despite her human-like jealousy – she tells Claire that if she dies, she wants Claire to do anything to take care of Alex. That’s truly selfless, as you’d expect an angel to be. Who do you think belongs with Alex, Claire or Noma? Noma’s just not my favorite character – sorry, Noma lovers – and Claire is completely screwed up, but I liked Claire and Alex together in Season 1 – I have hopes that they’ll figure out their way back to each other. I think they’re both stronger together, but if Alex continues to be so completely oblivious (and if he doesn’t shave off that awful little mustache), he may lose them both. 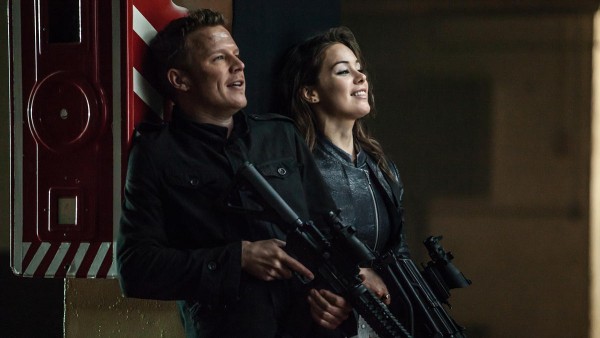 When you left the bar that day, everything changed. My angels had come to wipe out the planet. It was meant to be an extinction event. But oh no, you crossed sides and made it a war. And I get the blame. All my angels came my side but you, my own brother. You left me when I needed you most. You broke our family apart.

Gabriel really holds a grudge, doesn’t he! Were you prepared for Noma being one of Gabriel’s lieutenants? He sent her to find the child – she says the signs pointed toward a house, but she sent Michael the other way. “It serves him right for trusting you,” Gabriel tells her. “This is the only way to bring our Father back. Take me to the child.” “And what are we going to do with him?” she asks. “Kill him, of course,” Gabriel answers. “And when the child is gone, Michael will come back to me.” Except no, they didn’t, and Michael didn’t – and Gabriel has  never forgiven him. But Michael knows something now that he shares with Gabriel – he believes that the oldest and strongest Archangel, their brother Lucifer, is alive. “The Son of Morning – he lives.”

And what does that mean for Michael and Gabriel, and for mankind? Michael fills him in about Mallory, and the prophet, that he thinks Lucifer is responsible. But, and this is interesting – Gabriel reminds him that the rest of the archangels teamed up to “annihilate him.” “I know, but I think he survived. And I think he wants Alex. If I’m right, and this is Lucifer, he will remember what we did to him. He was the first, and most powerful of us. If he lives, then there’s no knowing what shape his vengeance will take.” So!!! Why did God order them to “annihilate” his first son (read this week’s Revelations for the answer, at least according to Vaun!)? We know Lucifer as the ruler of Hell, the angel who fell due to his own pride –  it doesn’t sound like the Dominion mythology goes in that direction. “You can’t just leave Lucifer alone, Gabriel! We must face him together!” “I don’t believe you, Michael. I dare not. But if there is a chance that Lucifer is alive, best I go to this town you speak of and find out for myself. But I won’t be going alone.” And he lifts off, Michael in his grasp. 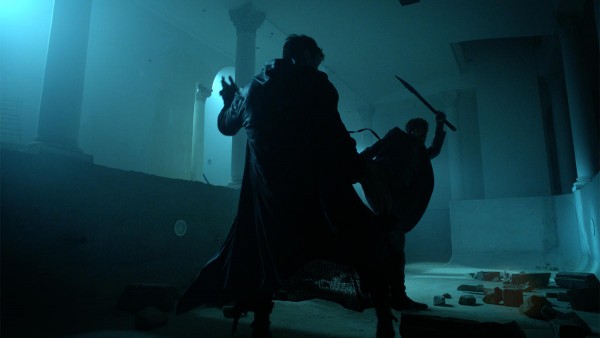 The final image of the episode – Alex walking toward the violent mob of Gabriel’s 8-ball army – leads me to believe that, consciously or directed by the markings, Alex is going to attempt a mass eviction. Will he succeed, or will he be torn apart? Next week’s preview says that “not everyone survives” the finale – who dies? Who lives? AND WHEN WILL SYFY RENEW THIS SHOW FOR NEXT YEAR? 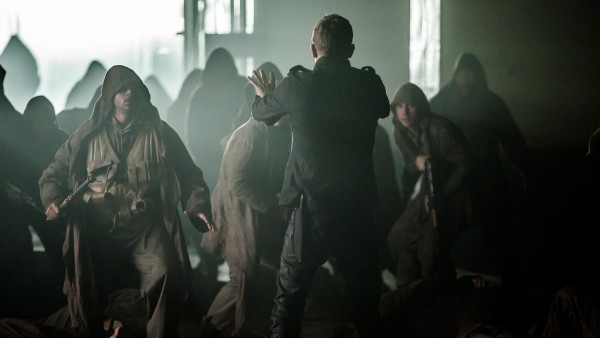 And for fun, this was some cool behind the scenes footage:

See the #RenewDominion Poetry Contest winners and honorable mention poems here
and watch for the other entries to be published!