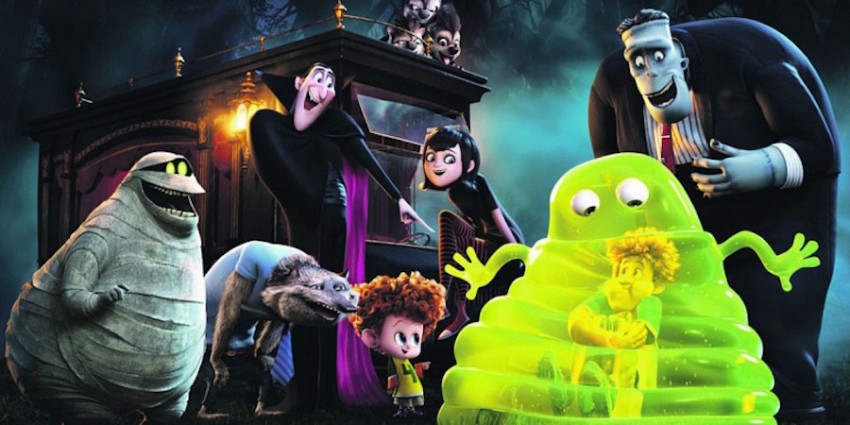 Hotel Transylvania 2 is exactly what I was hoping for in a sequel. The writers kept the adorable horror puns, the cute story arc, and also added in a dash of strong adult humor and themes to the mix! Though the first one had a much stronger story arc, the sequel lived up to the expectations.   The best part about the whole thing was how much it had me laughing; I don’t think there was a scene that I didn’t laugh at (except the ones that you’re not supposed to, of course). There were some things that were a little weird, but I’ll get to that in a bit. 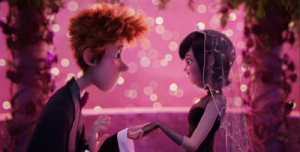 The movie starts out with Johnny and Mavis getting married, the timeline is a bit off because they don’t really explain how long they’ve been together since the first movie, but if you’re the “zing” of each others lives you can get married straightaway, right? Especially at 18 and 21! Anyway, like I said they never explain how long it’s been, but it’s a cute wedding.   Mavis’ dress is outstanding and I love how the animation in her veil shimmers like a real spider-web. Seeing humans in the hotel is a strange turn of events, but after the first one with Drac accepting humans into his life it only makes sense for it to go that way. After a year Mavis and Johnny surprise her dad by telling him that she’s pregnant, for a kids movie to have the main character get pregnant is different, but it goes back to what I had said earlier about the adult themes. (Edit: After some digging it seems as though Johnny is 28 when they have Dennis, so this means they marry at 24 and 27, not that crazy!)

Once they have the baby, Dennis, the whole dynamic between Johnny and Mavis changes, as well as the dynamic between Drac and Mavis. Watching Mavis turn into a crazed first time mom is cute, but she and her dad butt heads a lot when it comes to raising Dennis. Drac doesn’t understand why Mavis wants to raise “Dennisavich” (his vampires name) like a normal human and tries to convince her that she should be taking the “monster-like” approach to it. The other monsters seem to agree with Drac, especially since they give him “Baby’s First Guillotine” for his first birthday present. The little things like that are absolutely adorable dashes of horror comedy that I love about these films. By the age of four, Dennis hasn’t grown his fangs and this is when Mavis decides that she wants to move to California, where Johnny’s annoying family is from, and is really stubborn about it. Drac once again finds himself joining forces with Johnny to pull the wool over Mavis’ eyes to convince her to stay in Transylvania. Johnny agrees to take Mavis to California to show her around, not only to finally spend some alone time with her, but to show her how unhappy she will be there; this is when the hijinks ensue. 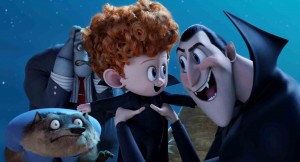 Drac decides that he’s going to put Dennis through “monster training”. He enlists the usual cast of characters, Frankenstein, Wayne, Griffin, and Murray, to get Dennis feeling “fangy”.  They bring Blobby along this time and it adds a lot of humor, the poor blob! They take Dennis to different places to show him their “monster skills” but they quickly find out that they’ve become a bit complacent in not having to scare people. They also realize that they don’t have fun being scary anymore and poor Wayne has to face that first hand.  Drac decides the only way they can get Dennis to fang is by taking him to the place where Drac became the vampy vampire he is today, summer camp!  Drac proceeds to throw Dennis off of the tallest tower (in order to get him to fly) and this is when Drac finds out the hard way that you can’t keep anything from anyone thanks to the online world and soon Mavis returns to Transylvania very upset with Drac. I definitely think she overreacted here, saying that Dennis isn’t safe with Drac is a bit much and I genuinely feel bad for Drac in this scene. Before the young family make the move to California, they throw Dennis’ 5th birthday party at the Hotel and Mavis decides to invite Vlad, her human-hating grandfather which of course is a really good idea right? Wrong. Things get crazy, but I’ll let you watch the movie to figure out what happens next!

Overall, the movie is adorable, hilarious, and follows in the footsteps of the first one with little “skit-like scenes” showing different aspects of castle life and comedic nods to horror movies. The movie touches heavily on social media and how attached to cell phones people have become. Johnny once again leads the way in making Drac “up to date” by adding social media to raise the castle’s business and it seems to work for them. They also have a lot of interesting and slight commentary on political correctness, shown specifically in Drac’s old summer camp, where “songs about killing people” and “hunting for mice” have turned into “vampires can be best friends for eternity” and “every kid is handed a mouse”.  As far as a kids movie goes, I think little kids would probably be afraid of parts, and a lot of the humor will definitely go over their head, for goodness sake Vlad says “those look like my grandma’s boobies”… he says “boobies” in a kids movie!! The adult aspect shows how different relationships are after kids are in the picture by having Johnny be depressed about how little time Mavis actually spends with him. Of course little kids won’t understand that at all, but it’s nice that they added that for the adults.

I give it a 3.5 out of 5, mainly because they could have lessened Mavis’ crazy and focused a bit more on her and Johnny resolving their problems. It was also a bit too convenient to have the resolution happen so quickly as well, but to keep the movie in the hour and a half time frame was a good idea to keep youngin’s attention span.  As far as the music goes, there wasn’t much different about the soundtrack, but it was cute having the monsters rock out to modern day pop, and of course Drac showing off his awesome dance skills is always cute.  I definitely recommend this movie for older children, teens, and adults!