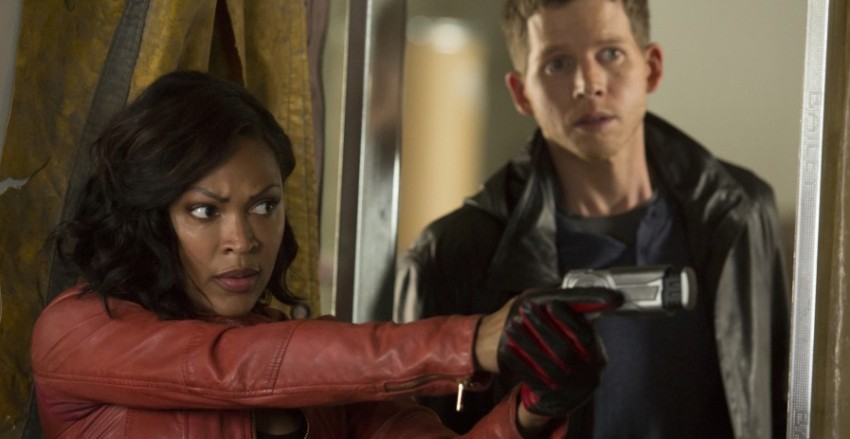 The anticipated series premiere of Fox’s Minority Report is here. The television series picks up 10 years in the future from where the hit movie of the same name ended.

Set in 2065, the show surrounds the three Precognitives, Agatha (Laura Regan), Arthur (Nick Zano), and Dash (Stark Sands), who worked the Precrime unit, providing visions of crimes before they happened, prior to it being abolished.  No longer in hiding, we enter in to their present daily life. Other key characters include Det. Lara Vega (Meagan Goode), her boss Will Blake (Wilmer Valderrama), co-workers Akeela (Li Jun Li) and former Precrime worker, Wally (Daniel London).  Disenchanted Vega and haunted Dash team up off the books to solve crimes together. 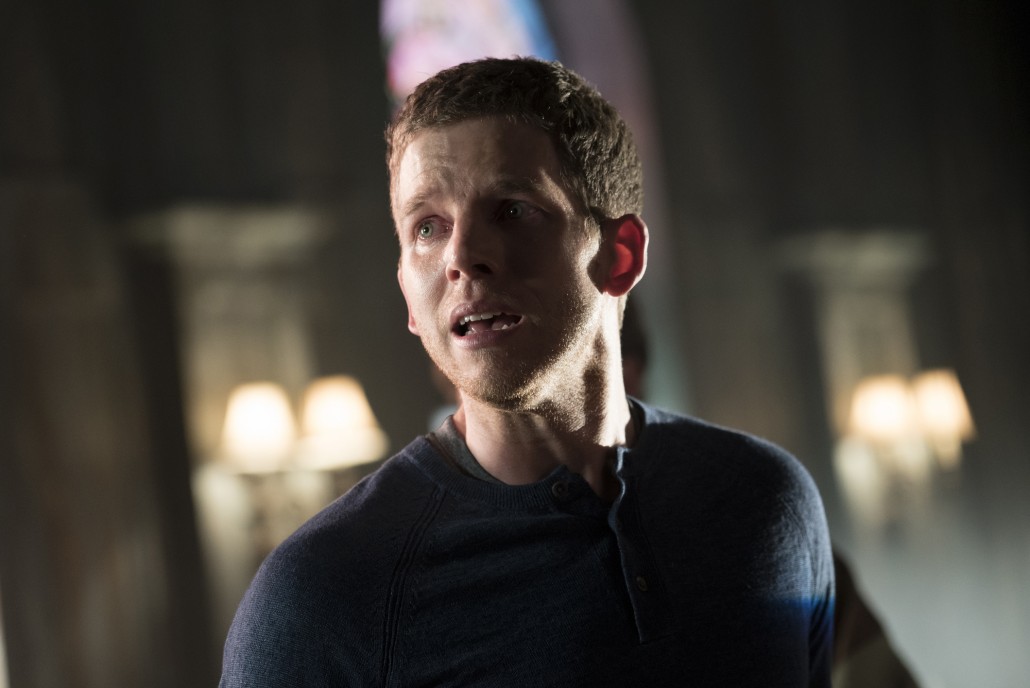 The episode opens with the smart and wise choice of the plot recap recalling back to the film, while setting up the television premise for viewers familiar or unfamiliar with the content. It’s a simple, understandable, and clean transition into their present day.

After that spot on opening sequence, the core relationship structure the series is built around, I found lacking time. The story arc to get Dash and Detective Vega secretly teamed up feels rushed and without solid foundational underpinnings. First off, he follows her back to headquarters and gives her his sketches of the crime she is trying to solve before stabbing her with a medication to immobilize her before running off.  She, then a dog with a juicy bone, aggressively targets him as a voyeur who watches crimes and sketches what he witnesses. Of course, she is jumping the gun and making vast assumptions about him maybe even being a suspect. The Precrime unit only closed down 10 years before. She’s a smart cookie and I imagine she could’ve figured out who and what he is without seeing him go into a vision.  She then has a rapid about face, as soon as she learns he’s a Precog, One minute she wants to take him in to the station, the next, team Precog. Detective Vega is far too eager to jump in and partner with Dash because she is tired of mopping up messes. For goodness sake, she takes him to her home for a meal and treats him like a longtime trusted colleague. Dash and Vega, instant BFF’s for life.  From his point of view, after being off the grid for many years with little human contact, socially awkward Dash is too open with sensitive information and without reservation, immediately joins Vega in crime solving as if it was a planned action. For the complexity of the characters, the closeness of relationship required, and level of trust to be earned between them, the minimal build up leaves me hungry for more depth and background before getting to this commitment between them.  To my surprise, the minimalistic writing proved itself out with this dynamic duo gelling properly and convincingly regardless of the lack of time spent in character growth. 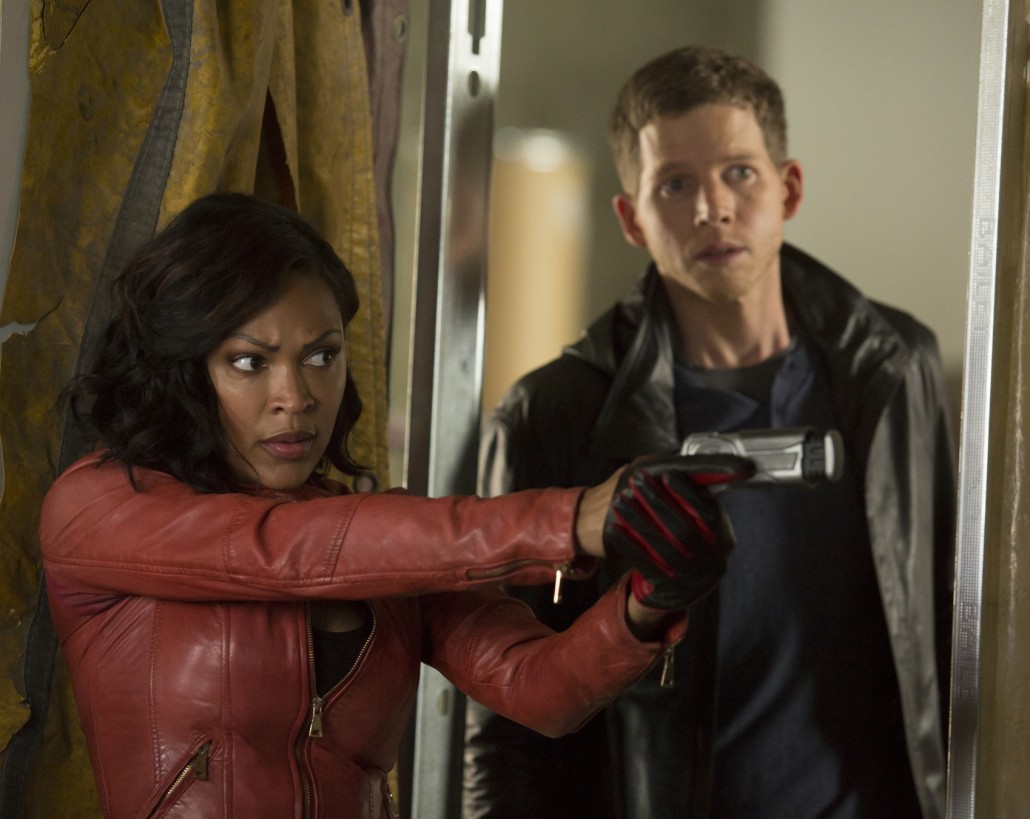 There are a few other players that need addressing. The rest of the police team, Akeela and Will Blake mesh comfortable with each other and Vega exuding a solid chemistry. There’s even the easy go to obviously placed sub plot that Vega and her boss, Blake have a history and tension with each other.  Dun, dun, dun, I foresee snarky competitiveness between them that ultimately is hiding unresolved or unacknowledged romantic feelings.  Stay tuned.

The three Precogs, were a hive unit until Precrime was abolished. They’re distinctly different from each other with the twins abilities split between them. Agatha being complete in herself, is still the strongest of the trio.  Dash is without appropriate social skill to interact with others, he’s a bit nervous, terribly brave, and haunted by his past, so much so, he is driven to help stop the crimes he sees in the present. Arthur is the charismatic, user of his gift to gain power, influence, and wealth.  He’s shown as selfish. Agatha is a solitary who lives away from civilization. She’s fearful, not trusting, and happy away from society. Dash is the only one we get to know fairly well this episode. I like him. I look forward to the other two being fleshed out.

There’s always a comedic relief character. The whacky character in the bunch is Wally. Having worked with the Precogs in the Precrime unit, he has continued to make tech out of his house that undoubtedly will be useful to Dash and Vega. He is quirky, funny, and smart. Along with Akeela, ample humorous asides can be expected to balance the assertiveness and intensity of the others. 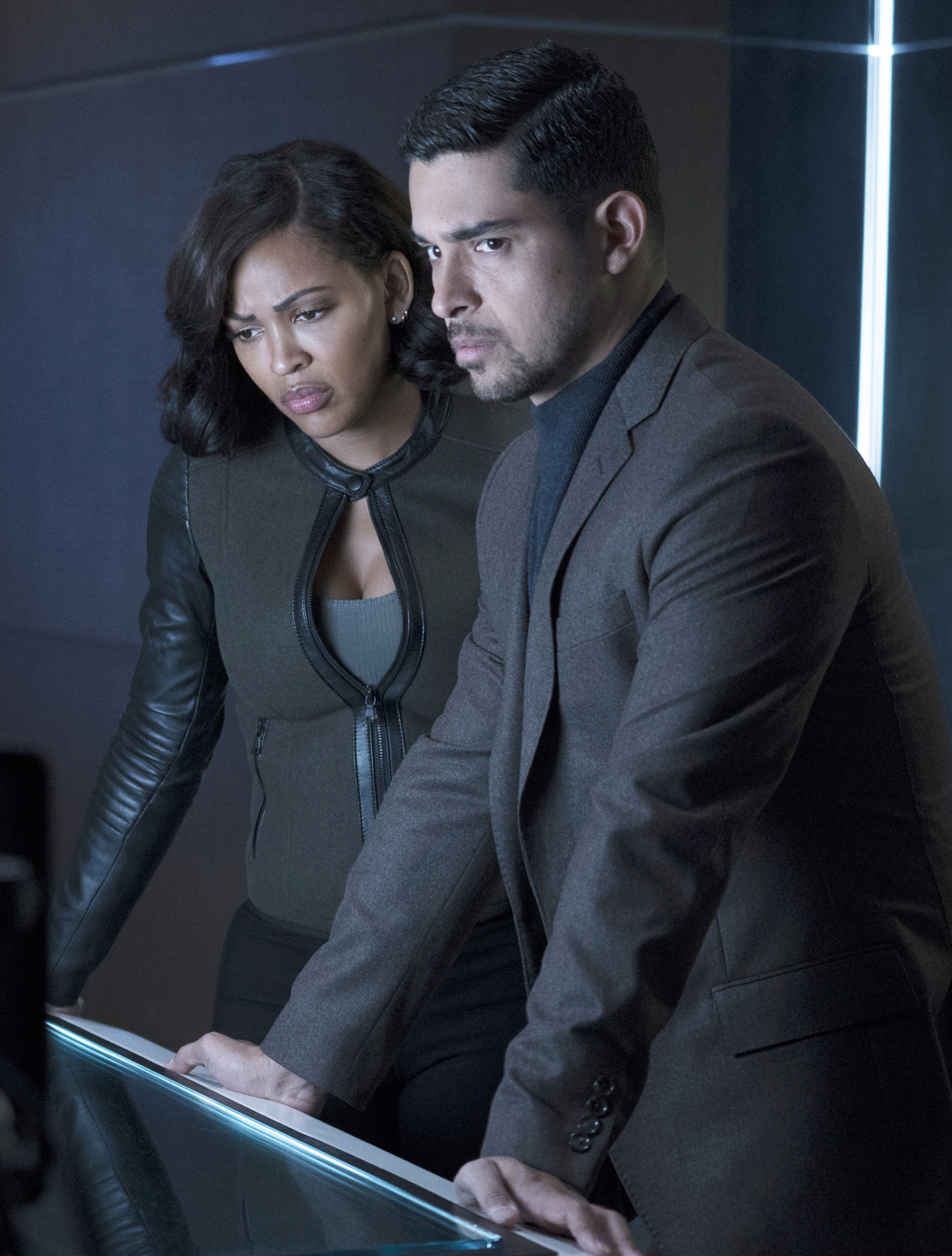 The non-human cast member that cannot be overlooked is the brilliant future tech. It’s well worth the watch to find out we’ll be using in the decades to come.  This show defines what puts the science in science fiction. The technology was developed for the show by experts who predict what is on the horizon for real life application.  Particularly of interest, the camera that floats in midair for amazing selfies, because taking pictures for social media will be certainly still happening in 50 years.  Detective Vega’s contact lenses that create a virtual computer and screen for on-site data analysis, scenario recreation, and a host of other useful tools for police work, is a step beyond the virtual screens and gloves used in the film.  One piece of tech I didn’t like, the injectable muscle paralyzer. It was effective but creepy.

Noteworthy non-tech chuckle moment, is the fact that Vega has her dad’s old vinyl but has not ideas what a CD is when they enter Wally’s apartment.

Based on this premiere episode, the series has the makings of a hit, if it stays away from relying on tech to tell the story.  The characters have opportunity to grow and show the layers over time.