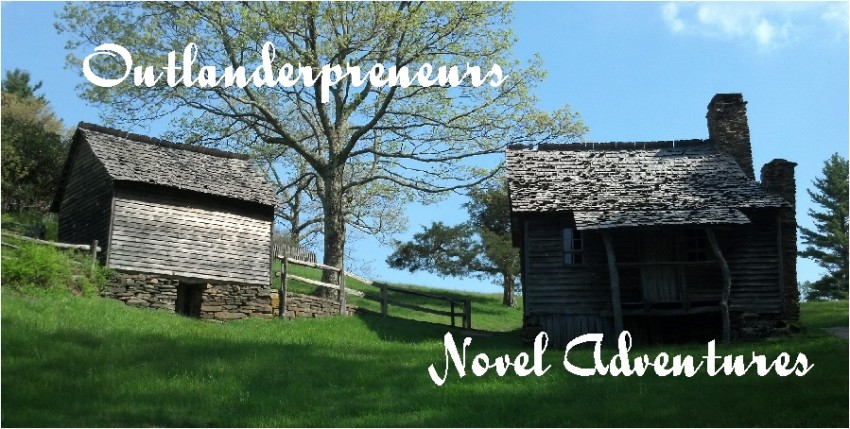 Home » Interviews » Outlander Entrepreneurs: Novel Adventures Will Take You There

Outlander Entrepreneurs: Novel Adventures Will Take You There

Novel Adventures
Part 1 of an occasional series on Outlanderpreneurs

I had the pleasure of meeting Kim Puhrmann, one of the owners of Novel Adventures, first briefly at the Thru the Stones conference last December, when she was an exhibitor, and then again during our trip to New York last April for the Season 1 second half premiere. Kim, I, and Samantha Kraupner, our team’s red carpet photographer, were roommates for a couple of nights. And hearing the story of how her company was formed and what they do was the catalyst  for this series on the exciting and impressive ways that creative people have been inspired, at least in part, by Outlander, and have used that inspiration to build a business of some kind, or to incorporate an Outlander theme into their business life. 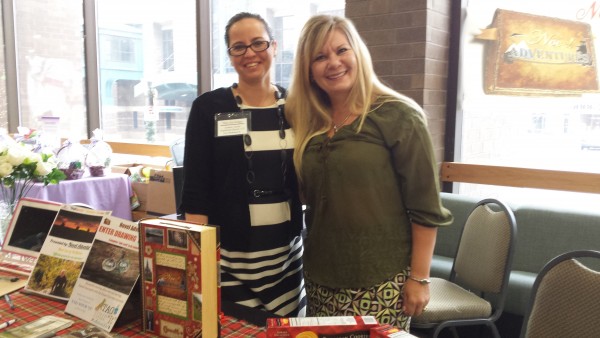 Andrea and Kim at Thru the Stones

Novel Adventures is a unique travel company. Have a favorite book? Would you like to follow in your favorite characters’ footsteps, going where they went, seeing what they saw? “That has become one of our objectives with each Novel Adventure we create; to find real world locations of fictional places in the story. Many other tour companies take you there, but we really TAKE you there!” Kim says.

When Kim and her business partner, Andrea Taylor, met in Colorado through a book club that Kim started, they quickly realized that they both had an interest in visiting Scotland. Andrea suggested reading Outlander for the book club, and Kim had never heard of it. As they began to plan a trip, they discovered that none of the existing travel companies met their needs. “So for the next year we researched and pored over every detail of Outlander and Dragonfly in Amber,” Kim explained, “looking for as many novel locations as we could. Our main mission was to find Craigh na Dun and Lallybroch.” In June of 2012, they took that trip. Using a technique they now call a “novel read,” they mark up copies of the books and “actually read passages from the book that take place in the very spot we are standing. We can see the same sights, smell the smells, hear the sounds and sometimes even feel the very things our characters felt while standing right there!” Both families have since moved from Colorado – Andrea to Arizona, Kim to Iowa, but they still work together on every Adventure. 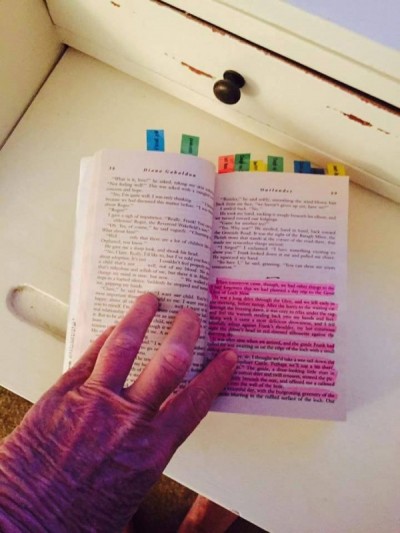 Each trip comes with its own set of “reads” and a brand new copy of the book for which their clients are touring. This summer, Kim took a group on a Summer Solstice Outlander-inspired tour. Typically, Novel Adventures doesn’t really do “group” tours. But they had several people ask when their next “tour” would be, and so they decided to do a group event to Scotland. “We wanted to offer a lot more variety and flexibility so that every type of traveler within our group could experience their adventure the way they wanted. We started with a base package that included at least one excursion every day, but then offered optional excursions at a low, medium and high level of difficulty/exertion, allowing people to build their own ‘itinerary within the itinerary,’ so to speak. It’s very challenging to accommodate everyone, so I can see why no one else does it this way, but to us, it’s what makes us different. We go places and do things no other companies do!” The youngest guest was 19 and the oldest was 70. Activities ranged from a leisurely afternoon at a museum to a canyon scramble where they rappelled down a 65 foot waterfall into cliffs below. “The point is, every single adventure is unique to every person on it. Even couples travelling together had differences in their itineraries.” 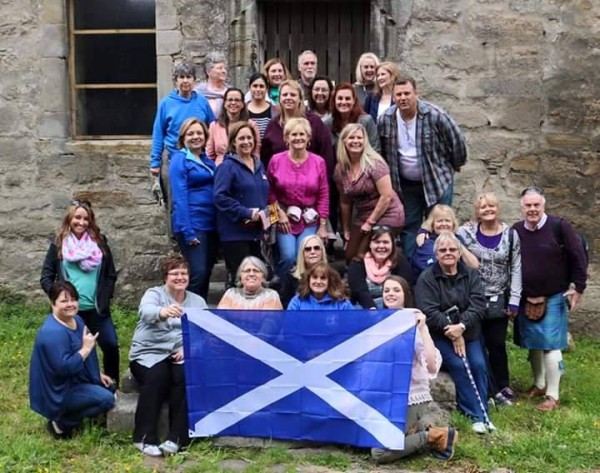 Two weeks after returning from that trip, Novel Adventures hosted their first “Clan Outlander” at A Gathering on the Ridge in Banner Elk, NC. The event, based on Drums of Autumn, was held at the historic Mast Farm Inn in conjunction with the Grandfather Mountain Highland Games. “This place IS Fraser’s Ridge. It’s located within 30 minutes of where Diana has said her Fraser’s Ridge is located. It was built in the early 1800s, so it is a little out of the time period, but truly, as close as you’re ever gonna get!” Kim said. 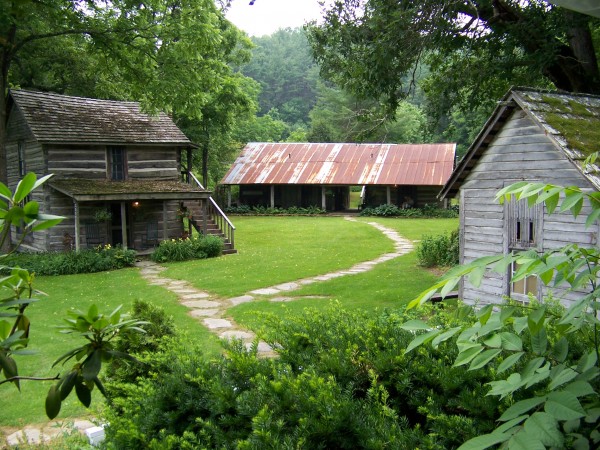 Mast Farm Inn, “A Gathering on the Ridge”

Novel Adventures has quite a few exciting events planned for 2016. Another Gathering is planned (contact information is below), and the pair is creating a Harry Potter tour, designed for only 17 guests. “It will begin in the Inverness, Scotland area, where our peeps check into a castle for the night. We open with a ‘sorting’ ceremony and wand selection.” The 12 day/11 night trip will take place in August 2016, and will include at a London theater where the group will be among the first to see a new play by JK Rowling and Jack Thorne called “Harry Potter and the Cursed Child.”

Other adventures they’ve taken guests on have included Lord Of The Rings in New Zealand; Twilight in Oregon for film locations and Washington for novel locations; Gone With The Wind in Georgia; and Drums Of Autumn in North Carolina. They’ll also do special tours on request – their first special request was a Paris tour based on Anna and the French Kiss, which included a special picnic in the same location that the book’s main character went to. 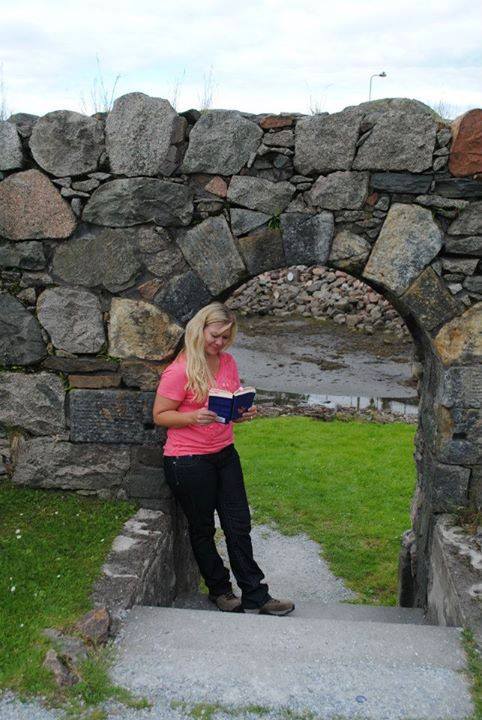 Kim and Andrea try to make it easy on their guests to pay for the trips. “We create a custom  PayPal link for them to ‘bank’ their payments into their own travel account. Little by little, even the smallest of payments add up, making it super easy for ANYONE to go on one of our adventures. People who never thought they could afford it, find that they are soon visiting the places they only dreamed about.” They are independent contractors for a larger travel company called International Tours of Houston, and carry all the licensing required.

They both believe it’s important to give back, as well. They do something they call “Salt and Light” – they take the first 10% of their profits and donate it to a Christian-based charity or to a charity sponsored by the authors and actors of the novel they’re working on. They also sponsor a child from Indonesia through Compassion International. “We feel strongly about giving back,” Kim explained.

For more information on Novel Adventures, their Harry Potter Excursion, or the 2016 Gathering on the Ridge, click here. All photos courtesy Kim Puhrmann.

If you have an Outlander-inspired business (including crafts, jewelry, or any other type of goods or services) and would like to be considered for inclusion in this series, please contact me on Twitter or email me at econrad@threeifbyspace.net!