Ron Moore took advantage of time before Giants vs Padres baseball games yesterday and today to invite fans to ask 5 questions yesterday and 10 today (it actually ended up being a few more than that, nice guy that he is!). This is a look through those questions, and maybe a little more.

Q Wait… is filming done for Season 2?
A No but I’m back in the States for a while.

Q You look very happy.
A This and Disneyland are two of my favorite places on earth.

Q Whisky or beer on hand for the game?
A Martini.

Q When will Bree be cast?
A As soon as we can find her. The search is underway.

Q What S1 scene was most difficult to film?
A Physically the Ft. William scenes in 109 were brutal. Emotionally the 115-116 prison (scenes) were really tough.

Q When will casting news for Roger be shared?
A Once we actually cast him.

Q When does the filming go back to Scotland or has it already?
A Once the Paris section is complete, in the next couple weeks.

Q What’s Outlander?
A It’s a science fiction movie starring Sean Connery. (Editor’s note: Actually, that film is Outland, and it was set on the moon!)

Q Not so much Outlander, but can I run my fingers through your sable locks someday?
A You’ll have to talk to Terry.
A (Terry) Fucking no. No hugging either. Sable locks, LOL!!!!
A (Ron) Just trying to give the people what they want…
A (Terry)  But notice how cleverly he included me in that response…
A (Ron) No fool that guy.
A (Terry) with raven/sable/whatever locks under hat.
A (Ron) in that case sable must be a kind of raccoon. 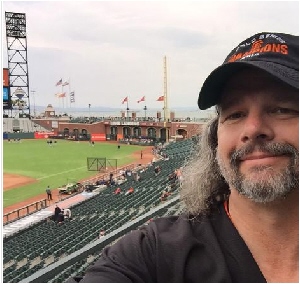 Q But I needed to know ketchup or mustard on your ballpark dog???
A Both.

Q Are you writing or directing any episodes this season?
A I wrote the first ep, no directing this year.

Q What episode are they currently shooting?
A Doing pieces from a lot of different eps at the moment. Will be shooting 209 and 210 in a couple weeks.

Q Will everyone be killed off like in Game of Thrones?
A There’s a thought. Let me check their contracts and see if I still have to pay them…

Q Did you know which episode you wanted Diana to write or did she pick?
A I spoke with Diana about the timing for her and the show.

Q What’s been the most difficult thing while filming Season 2?
A Creating whole new show essentially – Paris is completely different in every way from season one.

Q Why no mention of a Season 3 yet?
A No official pickup yet but I’m optimistic.

Q With the rewrites will we still see Brianna and Roger in Season 2?
A Yes.

Q Are Ira Behr and Toni Graphia back?
A Yes, along with Anne Kenney and Matt Roberts.

Q Are you worried about spoilers leaking from filming locations as more fans become aware of the show?
A Not really. Anyone who wants to avoid spoilers can just not visit those websites with pics.

Q Do you foresee being able to produce all 8 books? *hopeful
A That makes me so tired just to think about – but good problems to have if so.

Q How dies it feel to have such an amazing costume designer?
A The show is incredibly lucky to have someone of her skill, talent and good humor. Not to mention she’s gorgeous. Thus endeth another Q&A session. Thanks for playing. Be sure to pick up the home version of our show.