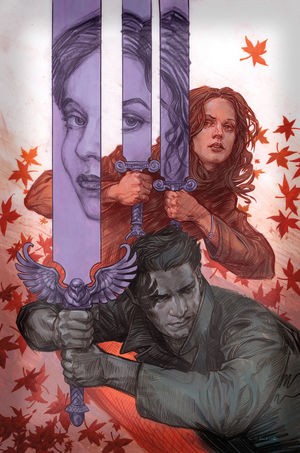 Angel is back in magic town and join Faith and Fred in the hunt for Archeus, Drusilla and her “babies” This review contains spoilers.

Fred is having some flashbacks to encounters with some vamps and how her blue little body sharing roomy busted out and trashed the un-living daylight out of them. As she comes out of it, she wakes up to find Angel watching over her, she is delighted he is back. The two head downstairs for a pow wow with the rest of the gang. I guess this gang are no scoobies, but the are a diverse bunch; Angel, Faith, Fred, Giles’ two glamorous aunts and Koh, warrior from an another dimension.

Angel fills them in on what was going on over in the US where he hooked up with Buffy and the scoobies fighting Archeus. The short of it is; fight ended badly, Archues most likely found a portal thingybob and is keeping Drusilla company over here in good old Blighty. Drusilla being one of Archeus “children”, much like Angel and Spike, but without a pesky soul to get in the way for some mind controlling action.

The group split up, Angel and Fred head to see Nadira, whilst Faith and Koh go on patrol and end up in a pub…as you do. The pub has been trashed by Drusillas babies for some reason, perhaps to create an diversion. Faith informs Angel who is not sure either why they trashed the pub. Fred is telling Angel about how she can feel when Illyria wants to come out and play but at the moment she is staying put. The two arrive at Nadira’s but just as they come into her room, she tells them to step away from the window, which proves to be a good warning as Drusillas goons come crashing throw it. They have been sent by mummy dearest to pick up the key to Magic Town, which seems to be Nadira herself.

So we have some direction, a few of the last issues have felt a bit stand alone with not a clear red tread going through them. Don’t get me wrong it has still been enjoyable, the stories have been interesting and the graphics are stunning, but this looks like we are pulling the gang together heading towards a goal. Good times ahead I hope!