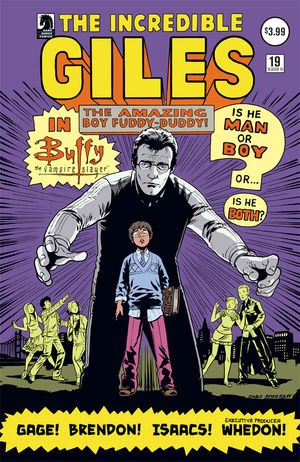 A Giles centered issue we are treated to this time, and as you might have guessed from the title there is a bit of swift aging of young master Giles. This review contains spoilers
WRITTEN BY: Christos Gage & Nicholas Brendon
PENCILS: Rebekah Isaacs
INKS: Dan Jackson
PUBLISHER: Dark Horse Comics
PRICE: $3.99
RELEASE: September 23

I am so so sorry, this issue snuck past without me noticing so my review is a bit late to the table. But do you know what, this stand alone issue is well worth the wait.

Willow has come up with a magic formula to let Giles to be an adult again for 2 days. He is rapidly aging throughout the process, so sadly at midnight Willow will turn Giles back into a pumpkin… I mean sexually frustrated preteen. Now you may ask, why did she have to go and bring up being sexually frustrated. Well my dears, this is the first thing adult Giles wants to do, or rather he wants to do Olivia. So that is exactly what he does. He also tries to give Buffy some advice, but she tells him she doesn’t need a watcher she needs someone to advice her how to live an adult life, and he is not the right person for it. Giles gets the hump and walks off.

Meanwhile Buffy long lost father Hank Summers has resurfaced and want to have dinner with Buffy and Dawn. We haven’t seen Hanky-daddy for a veeeery long time, I mean the bastard didn’t even show up with the girls mum died, so yeah, he ain’t winning father of the year award in my book. At the restaurant he tells Buffy and Dawn that he is getting remarried, and he would like Dawn in the wedding, but not Buffy as her now famous Slayer antics is making her a  persona non grata. Dawn tells him to bugger off and the girls leave. Buffy ponders if he is right, she is a danger to her surroundings, some of her friends have died because of her after all.

We are almost monster free in this issue (apart from Hank Summers he is a nasty piece of dadmonster) but when Xander takes Giles out for a drink,(he is legal now) they get attacked by a creature. Giles magic isn’t as strong as he is aging but they manage to beat the beastie by Giles hitting it over the head with a guitar.

Buffy and Giles meet up on the roof at the apartment block afterwards. Giles is asking Willow to reverse the process, as he is starting to understand that maybe getting a new chance at adolescence might not be such a horrible thing. He is also tells her that Dawn told him about what an arse Hank had been to her. Buffy things he might not be wrong, Giles say maybe, but the treatment of her really is, Hank has never acted like a father to her. That’s ok says Buffy, she had someone else who did. The two hug it out and tears are streaming down Buffy’s face.

This issue is really lovely. It brings back one of the cornerstones of the Buffyverse; the bond between Buffy and Giles. Even if now she is the struggling adult and Giles the frustrated youth, these two have a connection stronger than any blood ties Buffy could have to Hank. The fact that they could reverse their roles, if only for those hours on the roof meant that Buffy could get a chance to let go of all her responsibilities and cry out in the arms of her father figure. Well done the writers!