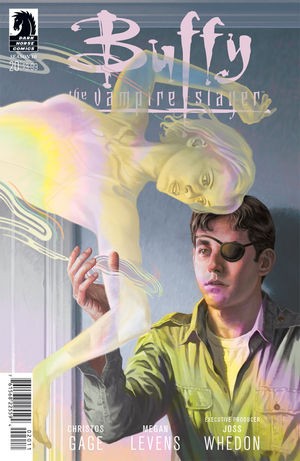 Xander, Giles and the ghostie Anya team up to save a lady from possession, whilst Spike and Buffy fight a Incubus and some inner demons from the past. This review contains spoilers.

My favorite artist Rebekah Isaacs takes a step back in this issue and instead we get a treat of the equally talented Megan Levens who we last had the pleasure of drawing our Scoobies in issue 13. We are already up to issue 20, and what an issue it is!

Let us start of by talking about Anya the ghost. As you should know by know, Xander spends a lot of his time mourning the break-up with his girlfriend Dawn by talking to his long dead girlfriend Anya. In this issue, Buffy and Spike convinces Xander to get up off his backside and go help out the police with some issues of the magic kind. Xander brings Giles along who can’t see Anya or even knows that she is meant to be hanging around. They meet a girl who is possessed and manages through chanting and fighting drive the spirit thing out of her. As the spirit leaves her body it whispers to Xander ” The soul of Anya Jenkins is at rest”. Huh…so if her soul is at rest who has been hanging around with Xander all this time?? Good question, yes indeedie. Eventually we get to see the ghost formally know as Anya down in some caves talking to a mysterious blue light. It seems they have a deal, Blue light thingy is going to make the ghost real, if the Anya wannabe is making Xander weak and suggestible. Well, I have to admit I can’t even guess who is behind this, we know Xander is a magnet for all kinds of weird demons so who knows…

But now, into the really well executed story about the Incubus. Buffy and Spike gets called to a women’s center, where one of the counselors has had a run in with a Incubus. A man that “talked” his way into her apartment and her bed. The rape subject is hanging over Buffy and Spike’s heads and when Spike decides to join Buffy in the shower later on and gets greeted with a kick and shove out of the shower, we can tell that Buffy indeed have a lot on her mind.  Spike is feeling bad, and Buffy comforts him, she reassures him that he is a different vampire now with soul, but actually, he needs to stop making this whole thing about him. It was after all, Buffy who was the victim here, she was the one who was nearly raped. She tells him they will have a problem if she needs to keep on reassuring him and he keeps on getting victimy. Spike tells her he wants to help her but he doesn’t know how. Buffy tells him that sometimes she needs her space, other times she will just need a hug.

I would like to applaud Gage for this topic. This issue of the near rape of Buffy is a dark cloud on the Spuffy sky. Us Spuffy fans spend a lot of time arguing with the pro-Angel bunch, that Spike without a soul is far nicer than Angelus. Heck even the judge back in season 2 said Spike reeked of humanity whilst Angelus was the poster boy for the evil soulless kind. Spike stopped himself from raping Buffy (well really it was Buffy that stopped him), he went to go get a soul to improve himself etc etc. But actually, how many of us actually thinks a bit about Buffy and her feelings in all this. And the backwardness that the victim ends having to comfort her near rapist about the whole incident. This is really what we SHOULD be talking about, as in real life so often the rape victims end up being pushed to the side and other issues surrounding the rape are more “important” to talk about. That’s why hats off to the creators that they touched on this sticky subject, and that they did it without breaking Spuffy up. This also shows us that Buffy considers be-souled Spike not the same person as the vampire who nearly raped her.

Oh but what about the Incubus you ask? Well duh, they killed him of course!